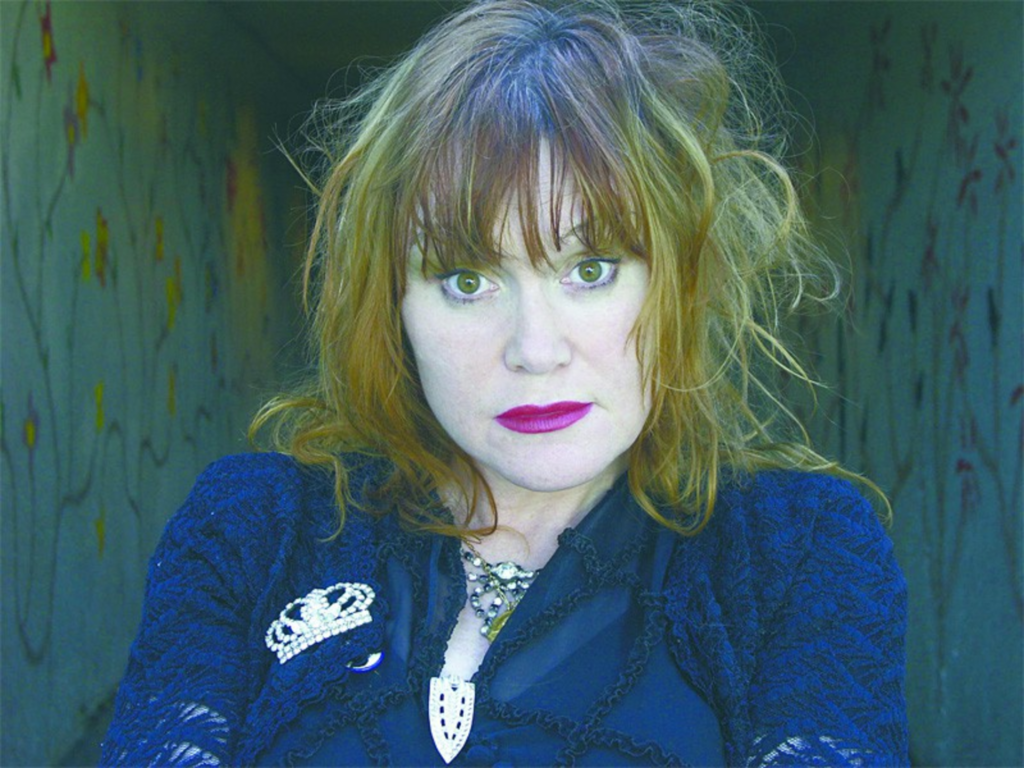 Exene Cervenka is a tireless artist, in every sense of the word. She publishes books of her poetry and exhibits her collages and journals in art galleries. But the 53-year-old is perhaps best known for her musical projects: the punk band X, rootsier rockers the Knitters (which features her X bandmates John Doe and D.J. Bonebrake) and the Sinners (whose lineup once featured St. Louis’ 7 Shot Screamers).

Cervenka’s solo Bloodshot Records debut, Somewhere Gone, was recorded in Lou Whitney’s Springfield, Missouri, studio, which also has been used by a bevy of local acts such as the Gaslights, Rex Hobart and the Misery Boys, and Kristie Stremel. It’s a work brimming with collaborators — cameos, too. In addition to Whitney on bass, the cast includes blues-punk Dex Romweber on keyboards; guitarist and percussionist Jason Edge (Cervenka’s third husband, a member of surf-rock act the Honkeys and relaunched rockers the Geargrinders); and Cindy Wasserman from the Los Angeles desert-punk band Dead Rock West. (Sadly, vocalist, cellist and fiddler Amy Farris, another woman who’s featured prominently on the album, died in October.)

Cervenka started writing Gone‘s songs a year and a half ago and now says she was trying to make a “lyric driven” record, which explains why her voice — clear, sweet and strong — is at the fore. Musically, the album sounds different from any of her existing projects. The spare album touches on gypsy folk, coffeehouse twang, and roots rock. Each individual instrument — saloon piano, acoustic guitar, feathery percussion, ominous cello — takes time in the spotlight, making Gone a delicate, graceful collection of songs.

As if music wasn’t keeping her busy enough, she also has been dealing with the neurological disorder multiple sclerosis.

Cervenka recently returned to her native California after living in rural Missouri for the past several years. She and Edge are divorcing.

“It was four years of isolation, which was a fantastic experience,” she says about her tenure in the Midwest. “[But I] decided over the summer that I would be happier coming back to California. So I did that, and I’m living here now. The record was conceived, made, created, whatever in Missouri. It belongs to Missouri, on some level, but I’m back in California.”

The Pitch: What did all the musicians you worked with bring to their songs? Why did you choose to work with each of them?

Cervenka: Well, that is the most important question of all of them, probably, because they brought the record to me. Everyone who played on it had their own ideas. They were well-rehearsed, they had a vision for what they wanted to hear. Sometimes I would change that vision because it wasn’t quite what I wanted [and] sometimes I would go with what they felt. I trusted everyone. I chose them because I knew I could trust them to play the right thing.

Fantastic. Very simple, very homey, great sounds, great microphones. He’s just amazing to be around because he’s like an American treasure. If you meet him, you’d know why — every word out of his mouth is amazing. He’s great at what he does.

What was the inspiration for Gone‘s songs?

Each one’s different, every one has a different story. “Somewhere Gone,” the title song — it was inspired by my friend Skwirl. She lives in New Orleans and she had to keep escaping those hurricanes, so I wrote a song about that.

What’s your favorite song on the album?

“Pinpoints,” probably. It’s the most out-there song. It’s because of what people played on it — it sounds like a Nashville-gypsy record. I don’t know how to describe it. It’s a great amalgamation of different people playing together.

What kind of touring plans do you have? Any shows in the works?

I’m doing weekend shows right now around the country. Eventually, I’ll be playing everywhere. Winter’s going to be kind of a bummer because I won’t get to certain places by December — I won’t get there until the spring. If I make a record in October, and people have forgotten all about me by spring, I’m in big trouble anyway.

I have a physical disability, too, and I’ve been very impressed that you’ve been open about having multiple sclerosis. Was that a difficult decision to put it out there?

Well, I knew I had to tell a bunch of people in the music industry. I was busy making new connections and working with new people in the industry and had to disclose to them. By the way, here’s what you’re getting when you sign me and Here’s what you’re getting when you start working with me and Here’s what you’re getting when I go out on the road. Plus, I had to tell my friends, so that information was going to come out and filter out into the general public. And my friends and fans that I didn’t tell would hear rumors and be confused and alarmed and not know exactly what was wrong — and then one disease turns into another disease, and that turns into you’re dead. So a long story, but it’s almost disrespectful not to tell people, so they know the real story from the get-go, so they’re not worrying about you. I didn’t want that. I couldn’t keep it personal; it would get out.

Has it changed how you might write poetry or write music?

It hasn’t so far. I’m not in a real terrible way, physically, right now. So nothing’s changed.