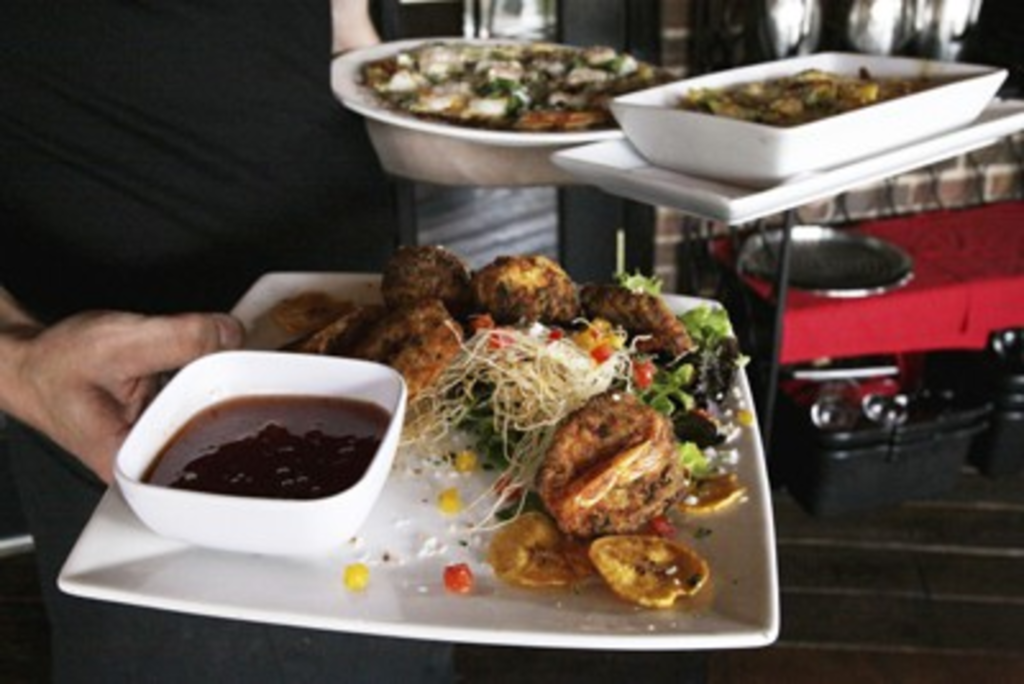 If local restaurants got the same gossipy tabloid coverage as Brad Pitt and Angelina Jolie, then Café Trio‘s move from 35th Street and Broadway to the Country Club Plaza would have been the talk of the town for the first half of 2009. Ever since the owners, Chris Youngers, Tai Nguyen and businessman Al Richey (who keeps a low profile), announced last year that they would pack up and move their then four-year-old bistro 10 blocks south, the Café Trio loyalists were split: Was it a good idea or a bad one?

I’ve been in the good-idea camp all along because I never liked the dark, cramped dining room at 3535 Broadway, with its antiquated parking garage, terrible bathrooms and uncomfortable banquettes. But my friend Truman was a fan of the old place and had serious misgivings about the move. “Why leave a location where you were successful?” he wails. “If it ain’t broke, don’t fix it. The original Café Trio was a comfortable, lovable joint. Now it’s just another slick Plaza restaurant.”

The new version of Café Trio is a lot more sleek and shiny and glamorous than the previous location — and I think that’s a good thing. The food and the service are better, too. But the fact that the new Café Trio has stayed busy since opening on June 8 doesn’t impress curmudgeonly Truman. “It’s the honeymoon period,” he says. “Every new restaurant has one. Everyone comes to check the place out. But does it have staying power?”

It’s true what he says about honeymoon phases. I’ve seen restaurants take off like crazy from the starting gate; I’ve seen others with successful openings last about 30 days and, in one sad case, barely 30 minutes. But after two months, Youngers and Nguyen are still pleased with their gamble: Their longtime fans continue to come in, and the Plaza tourists, who might have been wary venturing to 35th Street and Broadway, are strolling over from the nearby hotels.

This new Café Trio doesn’t seem as “clubby” as the former venue, but another friend of mine says later in the night, when the regulars crowd the outdoor deck and the dining room for cocktails and appetizers, the noisy, festive spirit of the old place (which can be either charming or annoying) is very much alive and well — particularly on weekends. “It’s still the place to go after a stuffy society function,” confessed one of those regulars, “to finally get something decent to eat and to unwind with a couple of drinks. It’s got a good energy.”

To its credit, Café Trio does have a unique vibration, which few of its predecessors in this space ever had. Even the congenial Frondizi’s, which Café Trio replaced, never had much of a reputation for being vibrant and exciting. What Frondizi’s did have was a talented chef: former Lidia’s executive chef Linda Duerr, who now oversees the kitchen at Zest.

Old favorites remain, of course, including the rack of lamb, which Youngers and Nguyen kept on the menu after they took over Papagallo at 3535 Broadway back in 2004. It became a signature, and it’s still the most expensive dish in the house. But it’s not as if the fare at Café Trio has suddenly gotten more modest. Of the 16 dinner entrées, only five of them — mostly pasta dishes — are priced less than $20.

Apparently the pain of the economy isn’t hitting the Café Trio crowd that hard, or maybe the fact that Youngers and Nguyen continue to offer bread and soup or salad as part of the dinner package (unlike many of their Plaza rivals) makes it a more alluring deal. (I don’t know whether it was Bahlmann’s decision to finally replace the pita bread with a basket of fresh Farm to Market baguette, but thank God he did. Now could we just have plain, unsalted butter instead of that little scoop of gratingly sweet honey butter?)

On the night Bob and I dined with Linda and her husband, Richard, Linda looked over Bahlmann’s selection of starters and small plates and noted that we could order a couple of smaller dishes for the same price as one dinner.

We did both, enjoying the view of the fountain and the trees in Mill Creek Park while sharing a first-rate combo of light coconut-fried shrimp — greaseless, with a discreet hand on the coconut, I’m happy to say — and plump, juicy scallops in the same crispy breading. Bob and Richard made short work of the chubby Prince Edward Island mussels, steamed in a delicately seasoned white-wine cream sauce with robust bits of pancetta and a dash of fresh fennel.

I’m not one of those who likes eating al fresco, but my friends insisted on sitting out on the deck, and I grudgingly went along. Luckily, we had an excellent server and a whirling electric fan nearby, making the balmy August evening seem, well, balmier. After finishing up the starters and then a wonderful cracker-crust pizza topped with bubbling goat cheese, duck confit, caramelized onion and oyster mushrooms, I could have called it a perfectly satisfying supper.

“We really should taste the soup,” Linda said. And so we ordered two of them: a creamy, supple tomato basil and Bahlmann’s latest concoction, a thick corn chowder with chopped peppers and pieces of hot chorizo. We should have stopped there, but we adventurously moved forward. Richard passed around an oversized bowl heaped with a ridiculously rich fettucini carbonara. Linda and I shared Bahlmann’s Mediterranean grilled seafood trio, which the kitchen graciously split for us so that we each had our own plate heaped with sautéed spinach, sun-dried tomato couscous, a hunk of grilled Atlantic salmon, a jumbo shrimp for Linda and a big fat grilled scallop for me. Bob kept the lump crab cakes drizzled with a kicky chipotle aïoli all for himself.

We groaned when the server asked about dessert. Who had room? Besides, I already knew that Café Trio is still importing its sweets from a commissary: I’d learned that a week earlier, when I had lunch in the pretty gold-and-ebony dining room with my friend Scott. We didn’t need dessert on that visit, either.

Scott’s a vegetarian but not a vegan — he includes cheese in his culinary repertoire. So after a surprisingly generous Caprese salad prepared with pillowy-soft mozzarella and beautiful sliced tomato, he dined sumptuously on Café Trio’s signature mac and cheese. It’s still one of the finest macaroni creations in town, served with a thick baked blanket of molten Fontina, Bel Paese and Romano. Bahlmann prepared it for Scott without the usual adornment of bacon.

I went meatless, too, so that we could share: a memorable chevre salad featuring a terrific timbale of goat cheese in a crunchy crust of fried, crushed pine nuts and, as an entrée, a gorgeous Margo pizza blanketed with basil pesto, mozzarella and grilled asparagus. It was a late-afternoon lunch, but the dining room was hopping. Clearly, at Café Trio, the honey­moon isn’t over.