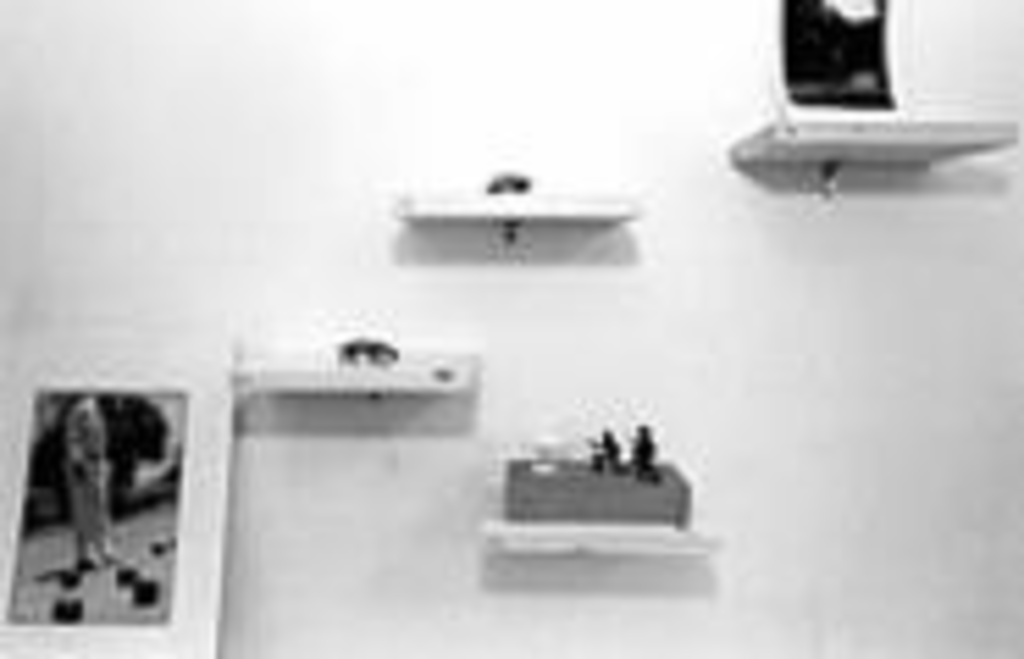 Consumer confidence is lagging. One-third of all holiday shoppers expect to spend less money this December than they did last. And it’s not just the major retailers who are being affected by the belt-tightening. If beautiful young people wearing striped sweaters and prancing across the television screen to cheery holiday music can’t entice folks to whip out their credit cards at the Gap, how are gallery owners supposed to get anyone to invest in art?

Tom Deatherage, owner of The Late Show, decided to have a sale. “It’s the reality of the times,” Deatherage says. “It’s tight. I live as an art dealer, and my artists live as artists. They need to make some money.” Deatherage condensed a two-person show (cityscapes of Rome by painter Joe Adolphe and fruit still lifes by self-taught artist Joe Gregory) to make room for the Art Elves Show, a salon-style group exhibition hung to entice holiday shoppers. By scheduling an additional reception and lowering prices, Deatherage hopes to widen his market. “Art is a product,” he admits. But Deatherage, a self-proclaimed “art pimp,” has more than just money on his mind. “I get a thrill out of selling art,” he says. “I show good people, and I love doing it.”

Deatherage derives satisfaction from providing a venue for new and midcareer artists. An example of the former is Fawad Khan, a master’s student at the School of Visual Arts in New York City. In “Nutrition,” one of his three works in the Art Elves Show, Khan has painted the rosy-pink outline of a bowl against the faded background of an Islamic pattern of pink Xs and pale-yellow stars. Having grown up in the West with an Eastern background, Khan considers himself a product of two worlds; his paintings reflect this dual nature. They are, he says, “visual experimentations on merging an Eastern pattern motif with a more Western painting aesthetic.” Priced at $500, “Nutrition” is included in the Art Elves Show as a preview to an upcoming Khan exhibition in the spring.

The best Art Elves deals, Deatherage says, are the three large, richly textured abstract paintings by Steve Frink, which go for $950 apiece. Frink, a 1992 alumnus of the Kansas City Art Institute, applies layer upon layer of paint to his canvases, then sands them down to create a leathery surface pocked with tiny rips and holes. In one of the three untitled works, splashes of mustard- and ketchup-colored paint around the edges contrast against a black background. Frink’s layering and sanding have combined to produce a dark, copper color that covers the rest of the canvas, while a grid of small vertical rectangles crosses the painting’s surface. Frink and Deatherage made the decision to cut the paintings’ prices by half. “It’s a hard thing to do,” Deatherage says, “but it’s the reality of the economy.”

The Late Show isn’t the only gallery in town looking to move art during the holiday season. Boasting the slogan “Don’t spend an arm and a leg,” the December Small Works Show at the Arts Incubator Gallery features small pieces priced at less than $400. More than fifty local and regional artists responded to the gallery’s open call with a flood of modestly sized works in media ranging from jewelry to painting to ceramics. “The show fits with the Arts Incubator’s mission statement to give exposure to artists who are not well-known,” says Stephanie Wilcox, the gallery’s director. “At this scale and price range, we can include people who don’t necessarily make a habit out of purchasing art.”

The show also allows the Arts Incubator to connect emerging talents with beginning art collectors by including artists who haven’t had much previous exposure in Kansas City’s Crossroads District. “This show is an entry into buying art. There’s a lot of affordable original works,” says Leigh Rosenberg Earnest, who submitted her prints, paintings and ceramics to Small Works. Participating artist Lynn Richardson-Ludwig adds, “Some of these artists are really going to take off. This is the time to buy their work, when it’s not as expensive as it might become.”

Metalsmith Jamie Brehm might be one of those soon-to-be-higher-priced newcomers. For the necklace “Faerie Pod,” Brehm has wound thin strands of sterling silver into a delicate loop, finally knotting them at one end, below which lies a heavy, silver-and-black pod. The pod’s goose-pimpled surface is cracked open to reveal rough grains of wheat glued inside. Brehm is interested in the contrast between her organic and metal materials. “I try to unify those pieces into one,” she explains.

Alexandra Robinson, a young artist new to the Kansas City area, has two elegant cut-paper works in the show: Lines of varying length and thickness run across the paper, forming geometric shapes and sharp angles or creating rhythmic patterns and textures. Light filters through the tiny cuts, casting shadows on the white background. “I’m interested in architecture and line and how they work together,” Robinson says. “These are studies. I’m drawing in the same way you would with pencil or marker, only I’m using cut paper.”

Many of the Small Works artists admit that pricing their work presents some difficulty. Leigh Rosenberg Earnest enlists the help of an art consultant; Jamie Brehm considers her process and materials when choosing a dollar amount. Sean Semones, however, used a simpler approach to give his mixed-media triptych a price. “I wanted my friends to be able to buy it if they wanted to,” the artist says. Priced at $250 (or $100 a section if sold separately), Semones’ “Cupid’s Make-up” features cherry-red paint that oozes over the tops of its two outer segments. Heavy-handed pen and pencil scratches appear periodically along with thick smudges of pink paint and thin, tan washes. The work’s silver spraypainted frames reflect the same glint as the graphite on the paper. Residue from a price sticker remains on the glass of one frame. Though he keeps his friends in mind when pricing his work, Semones is unlikely to sell to a pal. “I’d probably sooner trade something,” he says.

Across the street from the Arts Incubator, the Forum provides a space for doing just that. Here, a show that began with 34 brightly painted plastic animal figurines quickly morphed into a bizarre collection of art items. “The premise of this show,” says gallery owner John Raux, “is to exchange art for art. It’s a trade show.” Anyone who brings in an artwork is welcome to trade for a piece displayed on the shelves, Raux explains. He keeps a list of artists and titles, so participants know whose artwork they’re taking home. Because exhibition space is limited, each piece must be compact enough to fit on a 6-inch-by-12-inch shelf and weigh no more than 5 pounds.

The Trade Show has transformed the tiny Forum into an art cornucopia. At last check, items on display included a Mr. Rogers You Are Special record album with a SWAT uniform painted over the Cardiganed One, a sculpture fashioned from a roll of dental floss, and a bag of brownie mix. But those may well have been claimed by now; some pieces spend only a few hours on the wall before being traded for fresh artwork.

Raux contends that commercial galleries often skew the value of art, transforming it into a commodity. “The people who can’t support the arts financially still need to have a way or a means to support it,” he says. With The Trade Show, Raux hopes to introduce people to art as a means of fostering community. “This show,” he says, “is about the actual trading and interaction with people.”