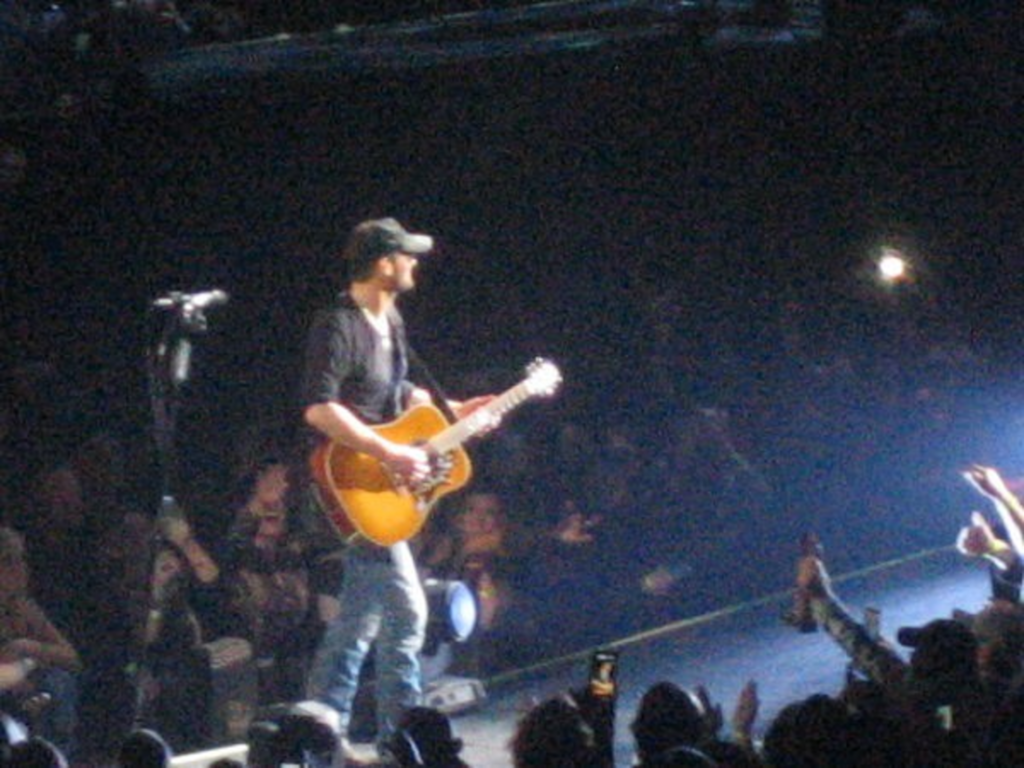 With country shows, the audience knows what to expect. They’ve read the script. Tradition allows for a few variations – the name of the current city tucked into a favorite lyric, maybe, or a “new one” here and there, but even in an arena, mainstream country concerts are less a rollercoaster ride and more, say, easy chair.

So what country shows pretty much never have – ever – is a craggy, 30-foot tall, snake-haired, smoke-shedding demon rising up from the depths of that mysterious area behind the soundboard. That’s just not what country does.

It is, however, what Eric Church does. He brought out the inflatable giant during “Devil, Devil (Prelude: Prince of Darkness),” a musically strange cautionary tale that paints Music City as a potentially lurid hell. (Not so subtly, this particular devil had a great big ol’ “Nashville” belt buckle.) While Church clearly has a lot of respect for tradition (Dwight Yoakam opened, after all), the man has his own rules. 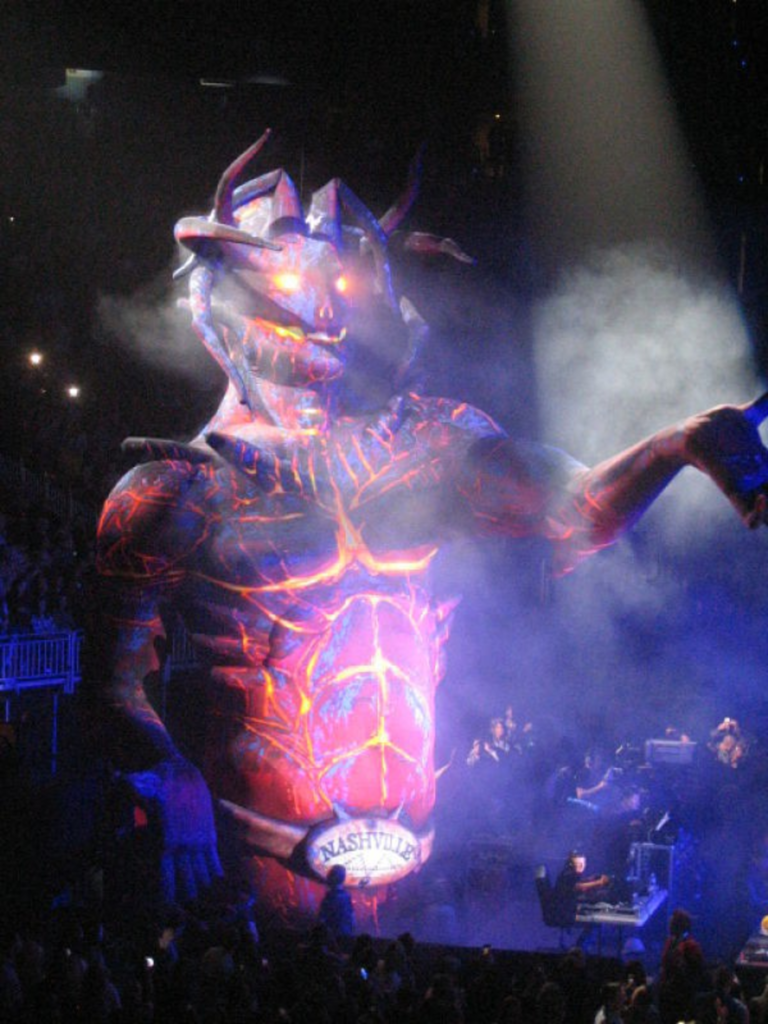 Even as the crew prepared the bare, in-the-round stage, expectations were murky. The show opened with a lone, strumming Church striding onstage for “The Outsiders,” the title track from his latest eponymously titled album, and as the band gathered slowly for the badass, arena-ready hard rock tune, the drummer descended from the light rigging (see also under “Not What Country Does”). The songs soon shifted to crowd pleasers like “Creepin’” and “Guys Like Me,” but even during those, and throughout the show, the band was surrounded with ascending and descending accordion light scaffolding, robotic columns Pink Floyd would love.

Church has always proclaimed his love for rockin’ country music, and this show often was just plain rock. “Lotta Boot to Fill” would have been at home in a ZZ Top show. “That’s Damn Rock and Roll,” with Church joined by the bluesy growl of Lzzy Hale from openers Halestorm, was absolutely devoid of twang.

That doesn’t mean that Church is willing to kick over the temple of country tradition completely. After all, he dove into “Pledge Allegiance to the Hag,” a Merle Haggard tribute, with absolute sincerity, and he had the entire crowd waving their beloved boots in the air with the “These Boots.” It was Friday, and the arena went pretty nuts for songs like “Jack Daniels” and “Smoke a Little Smoke.” 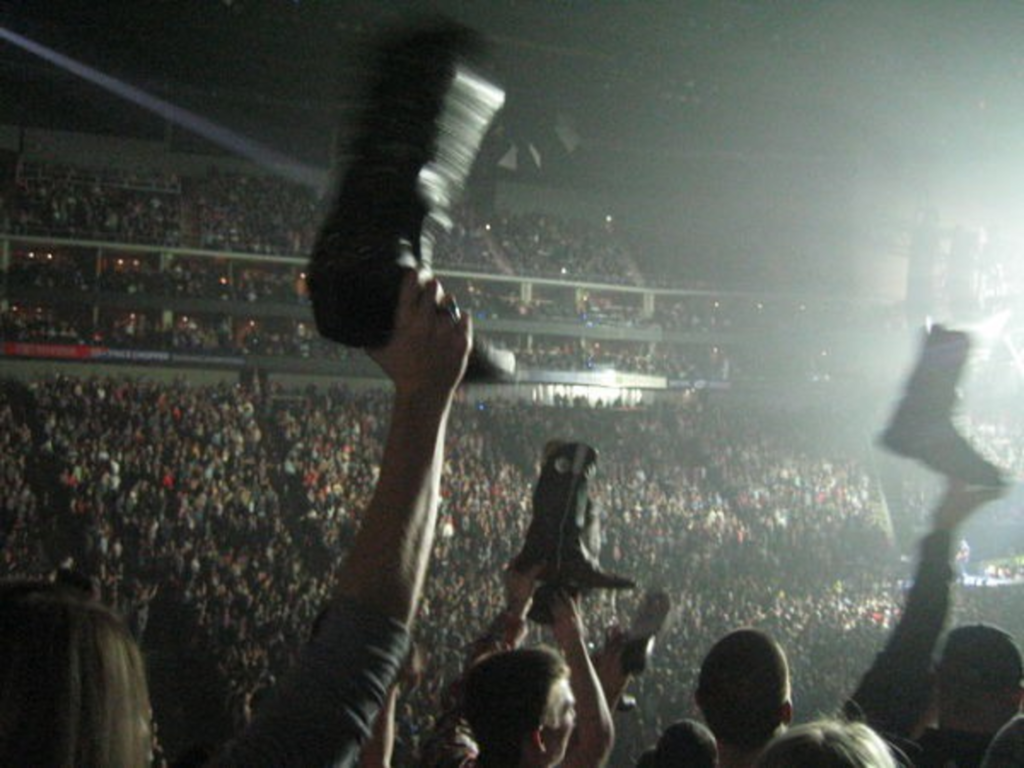 In spite of all the skulls and marijuana leaves on most of his artwork, Church is as affectionate, respectful and polite as any country hat act. He fondly reminisced about shows at the Beaumont Club, Power and Light stage, and The Midland (where he appeared with traditionalist George Strait). He went out of his way to slap hands, tip his hat, and raise his red Solo cup to his fans. One lucky fan even got to pick a non-planned song for the band to attempt, and the spontaneity of “The Hard Way” was a highlight of the show.

That fan-friendly aspect of Church is clearly inspired by the Boss (although it’s probably just the way he is, too). He says as much in “Springsteen,” the song at the peak of the evening’s crescendo. Musically, Church has very little in common with Bruce, and he doesn’t pretend otherwise; his covers of “Dancing in the Dark” and “Born To Run,” while heartfelt, were both a little shaky.

Yet one thing rock shows almost never do is cover Springsteen, and Church’s willingness to give those songs a try proved his willingness to mess with rock traditions, too. “Springsteen,” after all, is a song about loving how the man’s music made him feel, and Church’s stage show is a tribute to the way Springsteen manages to love up a whole arena. From the extensive walkways that Church and his band worked throughout the show (with special attention to those technically behind the stage) to the crowd light-up during “Drink in My Hand,” Church proved he’s learned the lesson, without ever becoming Bruce Lite.

Church closed with “Those I’ve Loved,” a return to his own traditional country roots. With the lyric I’m just a country boy with a guitar, the song dropped back to the rest of who Church is. He’s a contradictory pile of impulses, but he knows what he wants to do.

Leftovers: Church deserves credit for pulling together a show that, in its own weird way, imitates the kind of L.A. shows Dwight Yoakam was part of early in his career, when he’d appear on bills with X, The Blasters and Los Lobos. Yoakam’s set was heavy on early hits like “Streets of Bakersfield,” “Honky Tonk Man,” and “Guitars and Cadillacs,” and his extremely traditional honky tonk, while not as arena-friendly, was a wonderful bonus. Opener Halestorm’s rock anthems, a harbinger of Church’s upcoming sound, were a less obvious choice, but their inclusion in the mix was just one more welcome touch of the unexpected.

The Outsiders
Creepin’
Guys Like Me
I’m Gettin’ Stoned
Talladega
Pledge Allegiance to the Hag
Drink In My Hand
The Hard Way
Jack Daniels
Cold One
That’s Damn Rock and Roll
Give Me Back My Hometown
Homeboy
Dark Side
Devil, Devil (Prelude: Prince of Darkness)
Country Music Jesus
Smoke a Little Smoke
How ‘Bout You
These Boots
Lotta Boot Left To Fill
What I Once Was
Over When It’s Over
Dancing in the Dark/Springsteen/Born To Run
Those I’ve Loved