Emmaline Twist prepares to Get Loud alongside fellow justice-minded musicians 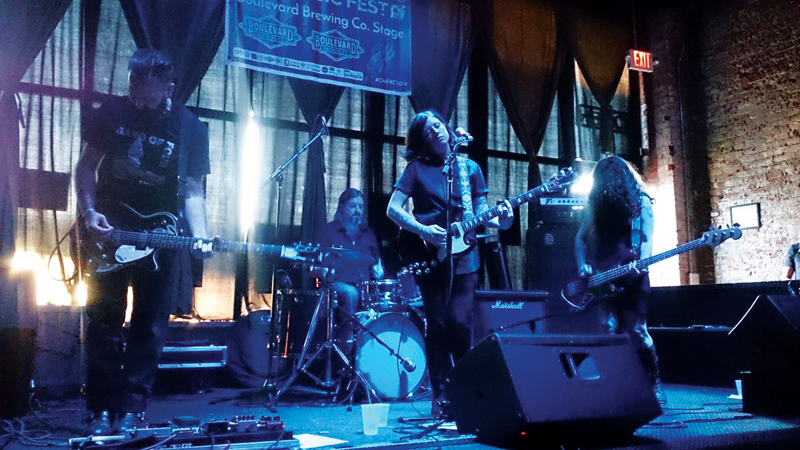 Kansas City’s Emmaline Twist plays angular rock and roll, swirled through with post-punk influences. Think Interpol, had that band listened to more Wire than Joy Division. And the band’s own pedigree benefits from an eye-catching diversity of talent. Singer and guitarist Meredith McGrade comes from Admiral of the Red, bassist Kristin Conkright from Onward Crispin Glover, drummer Jordan Knecht from the Silver Maggies, and baritone guitar player Krysztof Nemeth from the Latenight Callers. The recombination yields a darkly melodic sound.

The quartet has a single on the way from Middle Class Records and has made waves with knockout performances at the Outer Reaches Festival as well as clubs around town. I spoke with guitarist Nemeth by phone about the band’s music, and its involvement with the Get Loud benefit for KC for Refugees at the Record Bar, sponsored by Musicians for Active Justice

Krysztof Nemeth: At this time last year, Meredith and I weren’t sure what we were going to do. It wasn’t until that David Bowie tribute, at the end of January, that we had found the other two people to do it. Our first full band practice was in February — which is crazy, because so much has happened in that time. And man, we are so grateful. Think about this: Our first show was at the end of May, so we’ve only played, like, 10 times.

And you’re already signed to a label.

That happened two months into the process. Our discussions with Middle Class started at the end of August, beginning of September, because Don Simon had seen us at our first show, and then Steve Tulipana had seen us at our second show, so that was great, because when they started thinking about who they wanted to work with, we were at the top of the list. Plus, in their words, each of us individually had “paid our dues.”

We had all been in successful bands, so that helped when we started playing out, because people were like, “Oh, great — all these people’s new band!” The initial interest was there just because we had success before, but what kept people after that initial curiosity was that the music was interesting and engaging. That kept the momentum up.

Do you think it has something to do with the fact that there are recognizable elements of your past projects in Emmaline Twist?

Everybody in the band brings — and I’m using air quotes here — “their thing” to the band. Kristin’s work in Onward Crispin Glover: That was a heavy band. To hold down the low end in a three-guitar band? That takes something. I’ve been friends with John Knecht since we were in art school, and his work in the Silver Maggies — another band with a huge sound — he’s back there with a Charlie Watts, Ringo Starr sort of style that you just don’t see a lot of drummers playing.

And Meredith? The three of us talk about how much we love Meredith all the time, because not only does she have this incredibly interesting and intriguing vocal style, but she’s totally holding her own on rhythm guitar and finding her own place in this big sound the other three of us are making, and it just works so well. It’s a great thing to have all of the members of your team coming together to make something that is way bigger than the sum of your parts. It is the most happy that any of us have ever been with any recording process that we have ever done in our careers as musicians. There’s another thing to be completely grateful for, because … wow!

Is it that sense of gratitude that led to working on this KC for Refugees benefit?

I’ve been through a lot of shit in my life, and I’m in a really good place right now, with my family, with my job, with my fiancée, with the reputation that I’ve gained as a musician. It is my responsibility to help others because I am in a good position and can do something.

It’s no secret that I’m not a fan of Donald Trump. I’ve made my feelings pretty clear on that for the past year. After the election happened, and everyone was so fucking shell-shocked by it, my first thought was, “What can I do? What can I do to help remedy this?” One of my things in voicing my concerns about this is to find your own power to resist it.

How’d it come together?

Within the week of the election, I saw that everyone I knew was flipping out. It was a rough time. I sent a note to Sandra Freeman. She does all the Apocalypse Meow and Midcoast Takeover [shows], and she’s a complete badass. I knew she was upset, too, so I sent her a note saying, “If anyone in this town can do anything, it’s going to be you. What can I do to help make that happen?”

We’re focusing that energy into something positive, because it’s really easy to get a bunch of folks together and get angry. It became apparent really quickly that our shared philosophy was to focus the energy on making a positive impact, locally. That’s what our community has always been able to do. That’s why we’re doing it on inauguration night: It comes down to the idea of empowering and energizing people to get out and do something, instead of sitting at home and watching that train wreck. We want to counteract what we see as the divisiveness of this dude’s rhetoric.•

Musicians for Active Justice: Get Loud

With the Architects, Emmaline Twist, Hipshot Killer and (the) Medicine Theory