Getting rid of last year’s junk to make way for the promise of a new year (when everything, including you, will be better! Really!) is one of those perpetual clichés that never really takes. As with most things relating to 2020, however, this year is different. We don’t just want a fresh start, we desperately need one. The only appropriate way to end 2020 is to set fire to it and walk away like Angela Bassett torching her husband’s car in Waiting to Exhale.

In 2021, we have the opportunity to make some things right (or at least not worse). Whether you’re ringing in the New Year at home alone to avoid COVID-19, or you’re nursing a hangover on the couch come January 1 (or, honestly, both), you’ll want to ring in the new year with movies that get you ready to throw out the crap in your life and embrace the future. Consider this list of options, organized by mood-defining inspirational quotes, your cinematic smudge stick to expel the bad spirits of 2020. Let’s go! 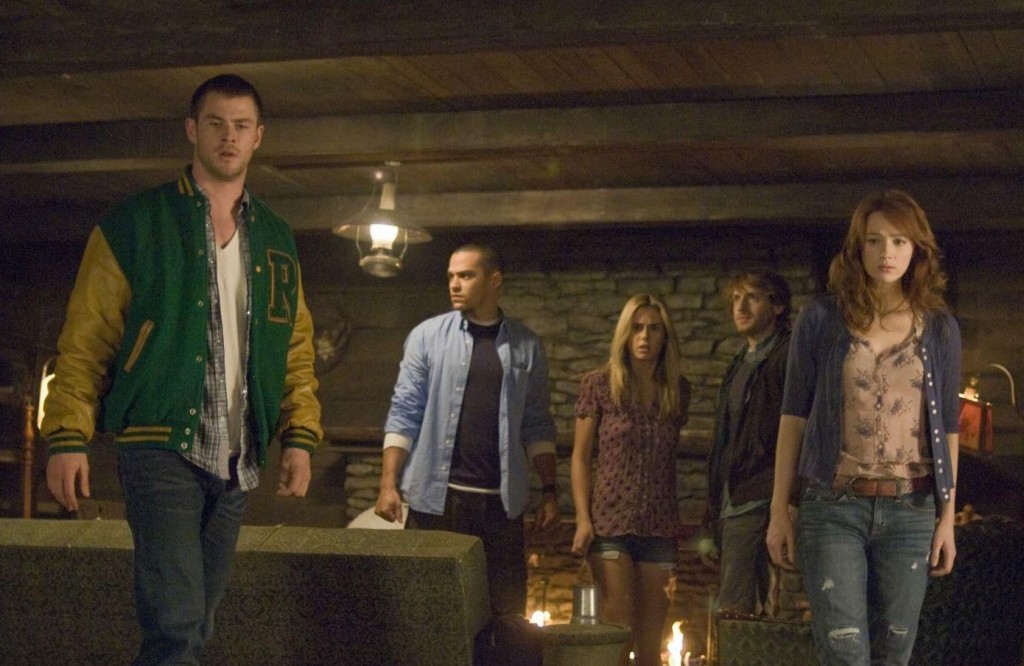 Photo courtesy of Cabin in the Woods

The Cabin in the Woods

If you’re looking for a “burn it all down” movie, it’s hard to do better than this 2011 Drew Goddard movie. It’s both the ultimate skewering of formulaic horror tropes and a fantastic analogy for how it feels to live in a rigged system.

Goddard’s film, co-written with Joss Whedon, follows a group of college students (Kristen Connolly, Anna Hutchison, Fran Kranz, Jesse Williams and a pre-Thor Chris Hemsworth) as they head to a secluded lake for a weekend of fun and friskiness. Of course, all is not as it seems, not only because of the terrifying zombie redneck torture family that attacks the nubile coeds, but also in the sense of who’s actually pulling the strings behind the scenes.

We’ve all felt jerked around this year by coronavirus, politicians, law enforcement, the economy, you name it. It’s easy to feel like unwilling cogs in a machine designed to crush the human spirit. The Cabin in the Woods reminds us that determined people, in the face of overwhelming, even supernatural odds, can take on the system and win–not just win, but dismantle the whole stupid, unjust mechanism and start over. 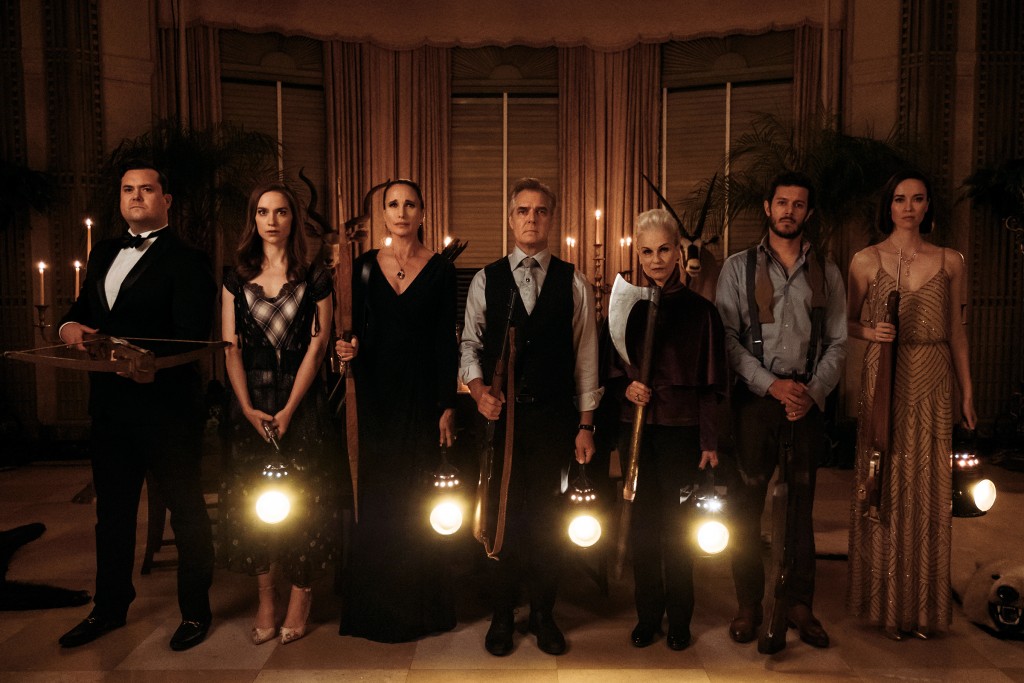 The final image of Ready or Not feels like 2020 in a nutshell: Samara Weaving’s Grace sits on the steps of a burning mansion, wearing a wedding dress and high-top sneakers plastered with blood, smoking a cigarette. Grace has been through absolute hell in the last 24 hours, marrying the man she thought was the love of her life, son of a mega-rich family of board game magnates, only to find out family tradition dictates that she survive their homicidal game of hide-and-seek.

Like The Cabin in the Woods, Ready or Not is a burn-it-all-down survival movie with a heroine you desperately want to see succeed. This year, we’ve all had to fight for survival at the hands of entitled folks desperately trying to hold on to privileges they believe are theirs by birthright. If you’ve had just about enough of that (and let’s be real, you totally have), Ready or Not is the catharsis you need. In 2020, we are all Grace. That burning mansion? It’s the white heteronormative patriarchy. Get at it. 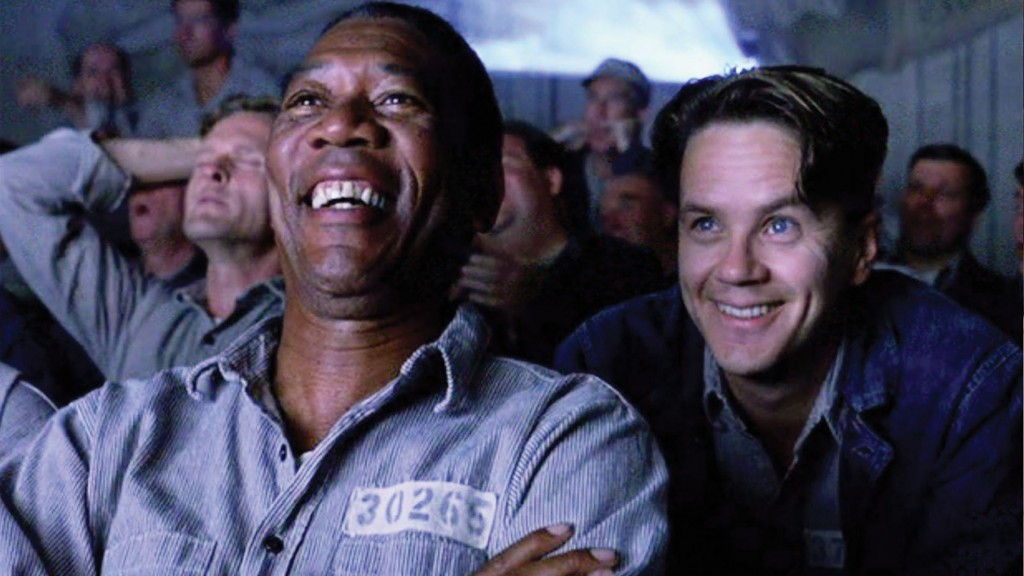 “Andy crawled to freedom through 500 yards of shit-smelling foulness I can’t even imagine.”

Morgan Freeman’s Red is describing the prison escape of Tim Robbins’s Andy Dufresne here, but it feels like he could be speaking about any of us. If you identified with the shell-shocked appearance of Grace at the end of Ready or Not, you’ll definitely relate to Andy taking a cleansing shower in the rain after crawling through a filthy sewer, and enduring all that after 20 years of wrongful imprisonment.

You’ve probably seen The Shawshank Redemption at some point in your life, but if you haven’t checked it out in a while, there’s no time like the present. Given the hell of the last four years, it’s an extremely rewarding experience. For extra credit, watch it while working on your own homemade version of Warden Norton’s “His judgment cometh, and that right soon” needlepoint.

“Be the change you wish to see in the world”––Gandhi 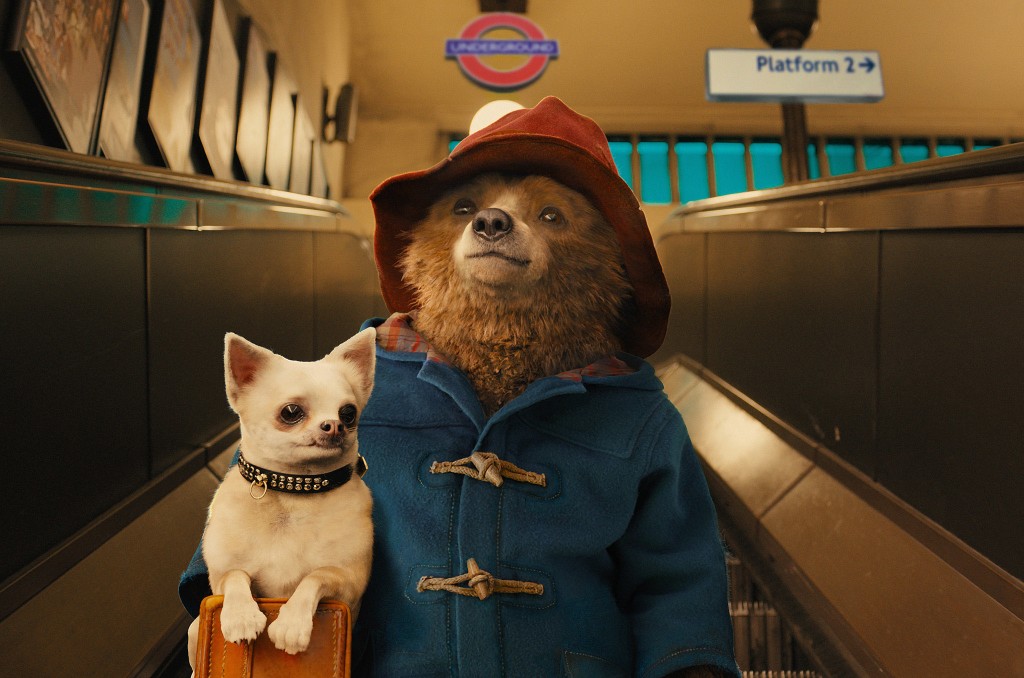 Maybe you’re feeling less vengeful and more celebratory, living for the hope of a public discourse defined by actual civility and kindness. If that’s your vibe, Paddington and Paddington 2 will make an inspiring, heartwarming double-feature.

Join the clumsy-but-sweet refugee bear Paddington and his adoptive Brown family as they discover the value of being open-minded and loving. Witness as Paddington makes a measurable impact on the happiness of his neighbors, and improves the prison system through selfless consideration and an occasionally-employed Hard Stare. Have a cleansing sob as Paddington finally understands the extent of his influence on the people around him. Listen when Paddington says “If we are kind and polite, the world will be right.” Make it your mantra for the next year, and see what happens. 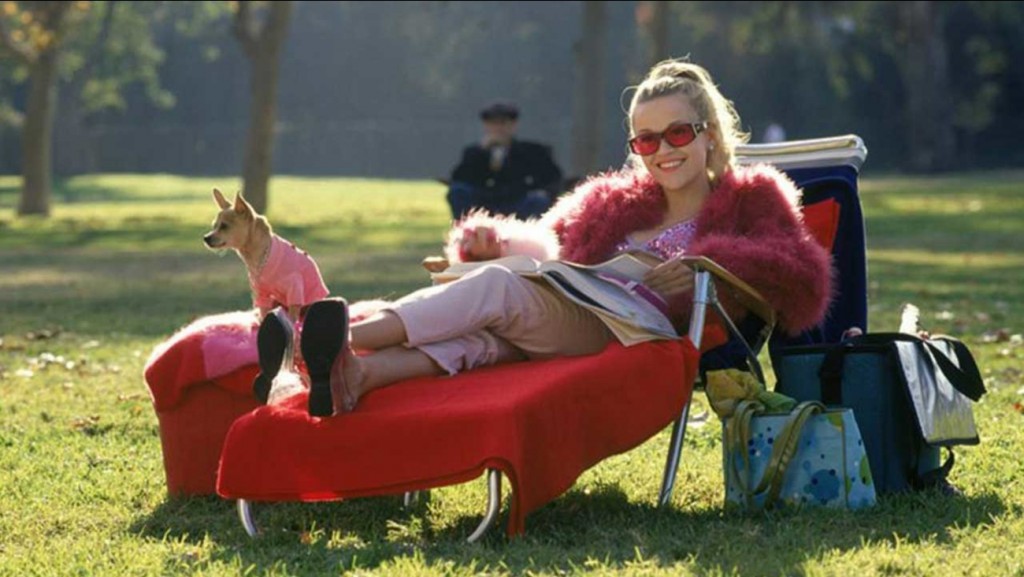 Legally Blonde’s Elle Woods is a perky, irrepressible agent of positivity and change, and she makes this movie a delightfully upbeat call to sweep out the cobwebs of the past year and make way for possibility. In her journey to get admitted to and graduate from Harvard Law, Elle defies others’ expectations of her, applying her natural charm and ingenuity to get the most out of the knowledge she already has. She’s also a team player, using her skills to help friends in need. That’s the kind of energy we all should bring with us into 2021. Be your authentic self, and use that identity to help build others up. 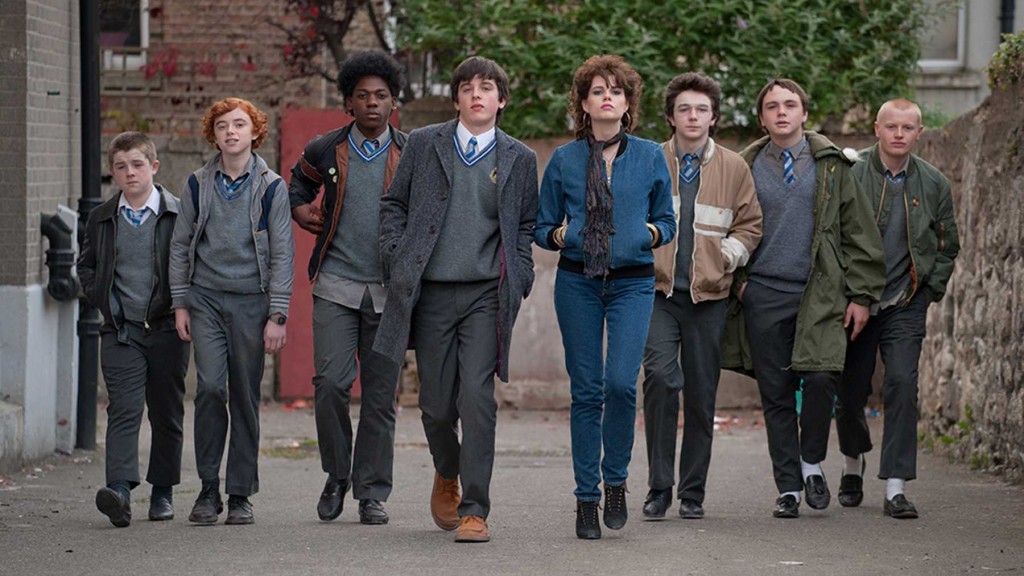 It’s hard to be enthusiastic about life right now, but John Carney’s 2016 movie Sing Street might help give you the kick in the pants you need to make 2021 a year of promise and new beginnings. Carney’s film about misfit Dublin teens starting a band in the 80s is full of creativity, charm, and life-affirming sentiment, not to mention some banger tunes. It’s got the wide-eyed optimism of youth, backed up by its characters’ determination to go out and make their dreams happen. If Paddington’s “kind and polite” isn’t the approach to life you’re looking for, maybe Sing Street’s teen rocker declaration of “drive it like you stole it” can be instead. 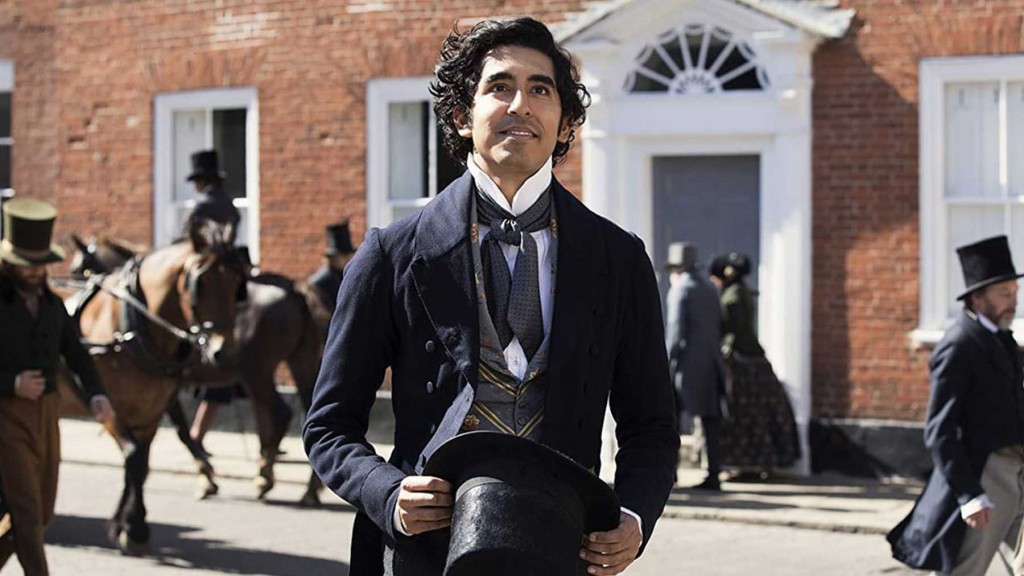 Photo courtesy of The Personal History of David Copperfield

The Personal History of David Copperfield

Maybe your year—or your life—contains more fluctuations of fortune than most. When things get difficult, we can either get despondent, or get creative. The Personal History of David Copperfield argues for creativity as resilience. Armando Iannucci’s adaptation of the classic Charles Dickens novel gives us a hero who uses his experiences and the people around him to help him vibrantly tell his own story. Every experience, good or bad, contains worthy characters and valuable life lessons. 2021 is likely to contain difficulties of its own, but The Personal History of David Copperfield’s worldview can help you meet those challenges head-on.

“There is only one thing on this earth more powerful than evil, and it’s us” ––Buffy the Vampire Slayer 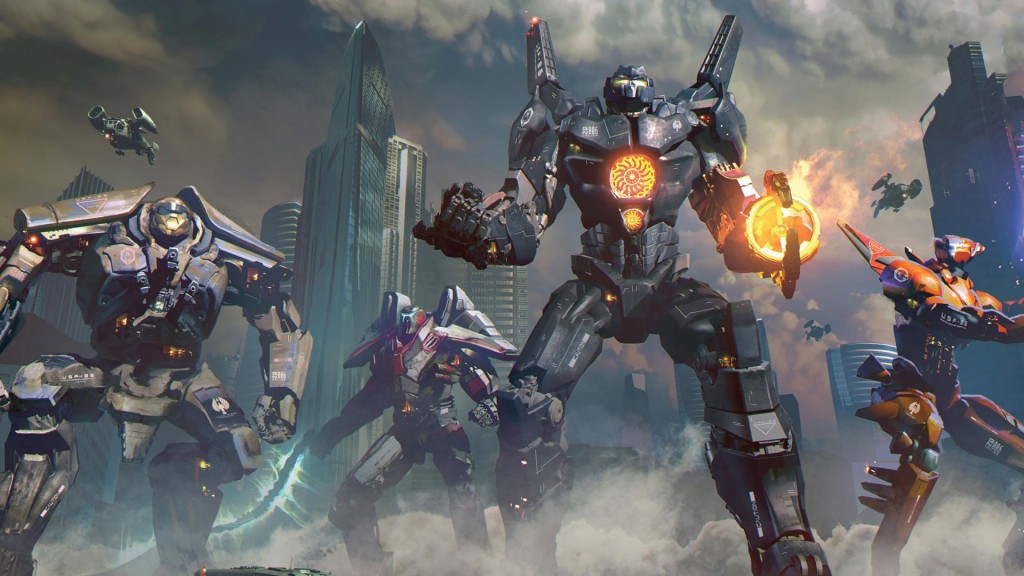 Guillermo del Toro’s Pacific Rim is first and foremost a love letter to Japanese anime and kaiju movies. However, it’s also a movie about teamwork. Nobody in Pacific Rim beats the movie’s giant aquatic monsters on their own. It’s all about finding the people you grok with the most, and using that connection to beat down the baddies. If the end of this year has you amped to start the next one hunting down systemic or personal leviathan, then it’s time to hop in your jaeger and grab a drift-compatible buddy. To paraphrase Idris Elba’s Stacker Pentecost, today you’re canceling the apocalypse.

Photo courtesy of Spider-Man: Into the Spider-Verse

Spider-Man: Into the Spider-Verse

Even though we’ve spent most of this year in isolation, 2020 has felt like it cemented the importance of community and relationships in our lives. Our friends, mentors, and family help us remember who we are, and act according to our values, even when the world is falling apart. Spider-Man: Into the Spider-Verse is inspiring in a lot of ways, but its depiction of how Miles Morales learns how to become a hero with help from alternate-dimension Spider-folk is perhaps its most affecting aspect. Doing the right thing is a lot easier when we know we aren’t doing it alone. 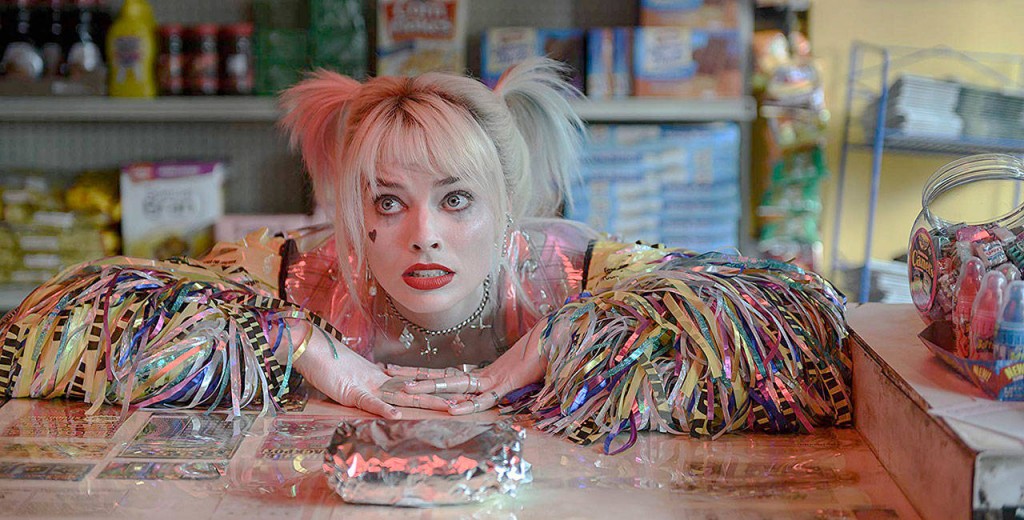 Similarly to Into the Spider-Verse, Cathy Yan’s gonzo Birds of Prey highlights goals accomplished through teamwork. Given the state of women’s rights recently, it’s also an empowering portrait of female friendship that feels authentic to how female friendships actually work.

After her troubling but memorable introduction in Suicide Squad, Margot Robbie’s Harley Quinn gets to re-invent herself with a better wardrobe, independent lifestyle, and a backup crew of awesome women. When Harley helpfully offers Jurnee Smollett’s Dinah Lance a hair tie mid-bad guy battle? That’s sisterhood right there. If 2020 has taught us anything, it’s the importance of having a support system that’s got your back. If you’re feeling social, plan a digital watch party with your squad and go into the new year with your head (and middle fingers) raised high.