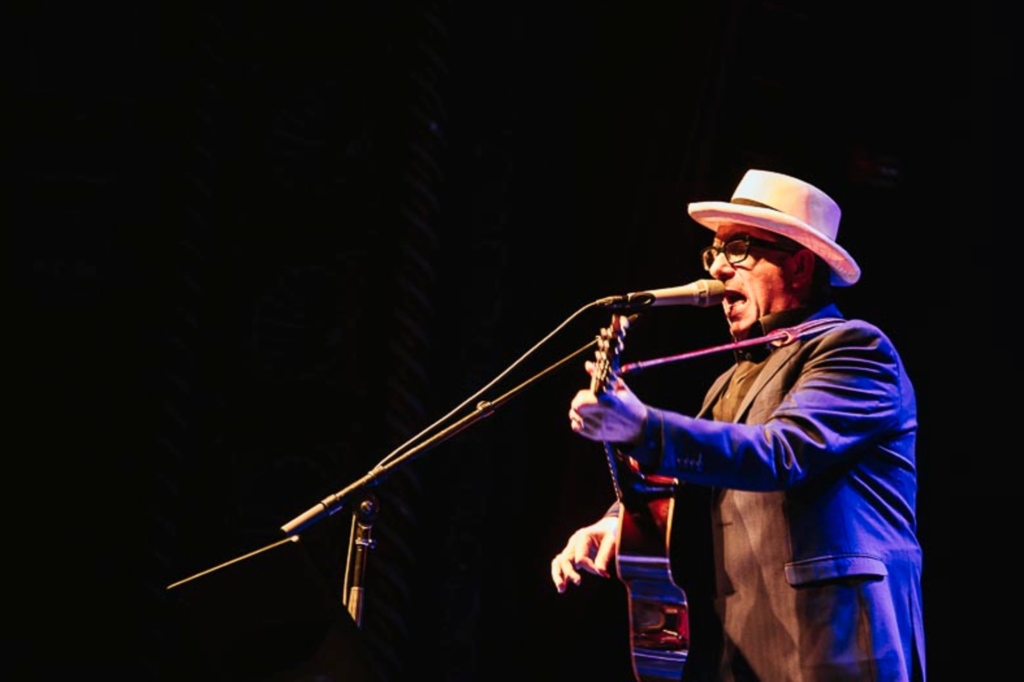 Anyone who remained at Elvis Costello’s Uptown show last night until the very end – nearly two and a half hours after he started the night – left happy. Over the course of 31 songs – a setlist of both radio hits and deep cuts – the prolific artist gave fans a show that was truly unforgettable. 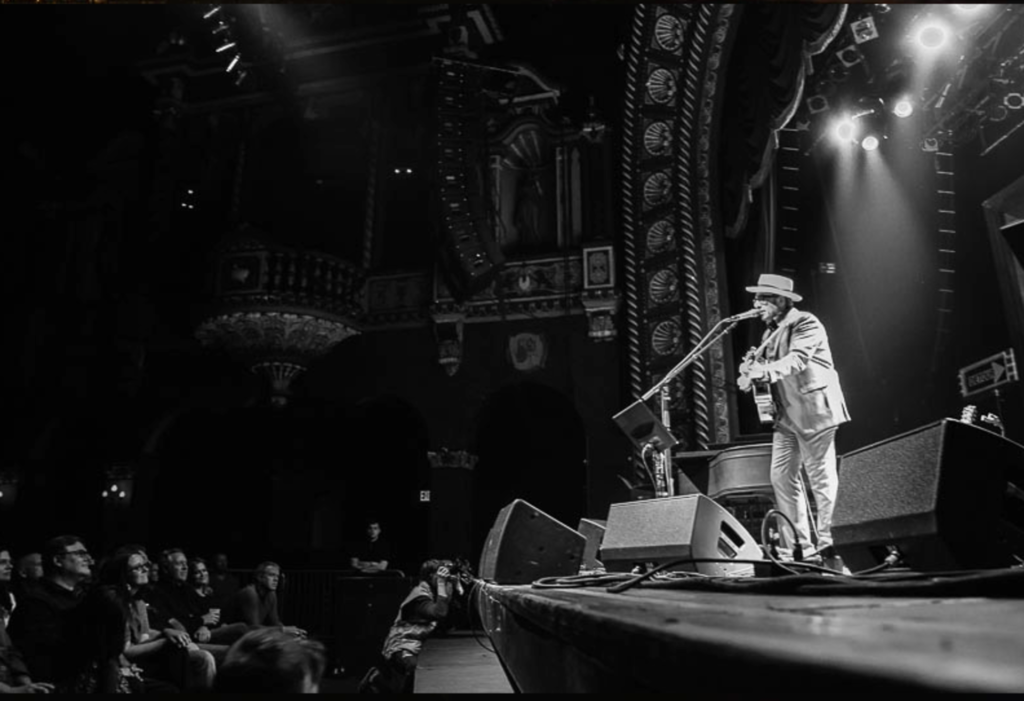 Following an excellent set by opening band Larkin Poe, a sister duo from Atlanta, Georgia, Costello walked onstage with a bright smile. He was fairly casual about the whole thing as he picked up one of several guitars and began an acoustic version of “(Angels Wanna Wear My) Red Shoes.” Decimating the fourth wall seemed to be a theme throughout the night: Costello performed solo on stage for the majority of the evening, engaging in warm conversational banter with the audience.

The stage was set up for such familiarity. Aside from his guitars and a baby grand piano, the decorations seemed vaguely reminiscent of the set of A Prairie Home Companion: There was a light-up “On Air” sign, a “Detour” sign, a cozy-looking blue rocking chair. A large television displayed randomized song lyrics, archival footage of Costello and some of his family. 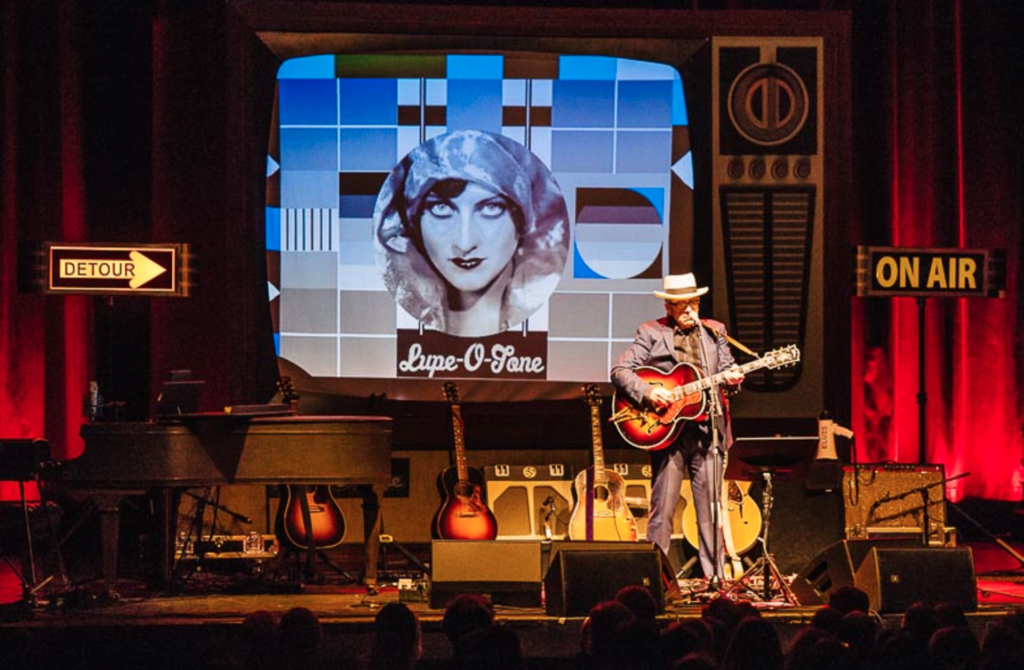 Costello himself – even with his fine three-piece suit and white hat cocked just so – was entirely approachable. As the crowd shouted out love and requests, he smiled and winked at them, joking genially between songs.

“I thought, tonight, I’d sing songs just about love and fidelity,” he said after the first two songs, “but then I figured I’d have a really short show.”

Short, perhaps, and lacking some of Costello’s best material – a fear which he squashed pretty quickly. For the first handful of songs, Costello stood center stage, switching the inflection of his voice as often as he changed guitars. His grainy warble was at its best on “Blue Minute,” which was given a jangly rockabilly treatment; later, his voice became fine and delicate as he sang the refrain on “I Hear A Melody.” There was plenty of variety: “Church Underground” became a slinky, cool number; “Ascension Day” was stark and solemn.

But it was the two songs Costello played on the piano that might have been the true highlights of the evening. He delivered “Almost Blue” as a naked, doleful jazz number that simply melted us all into a puddle of feelings. The theater was pin-drop silent. He broke our hearts further by following it up with “I Can’t Stand Up For Falling Down.” As soon as the song was over, he rose from the piano, took a proud little bow, and strapped on another guitar. (Other rock legends, please note: This is how you do it.) 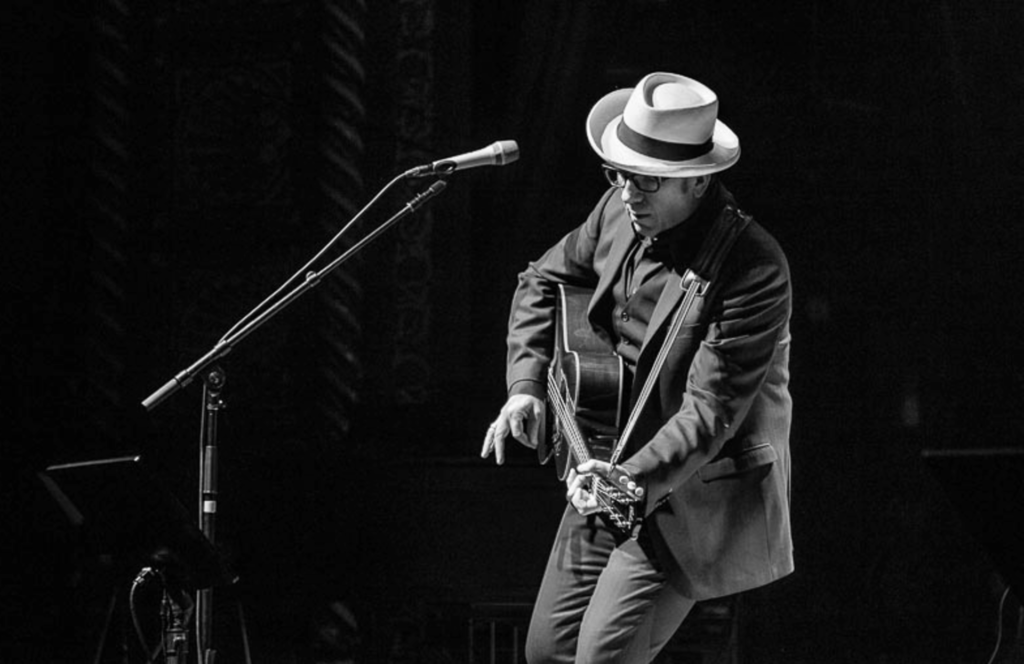 After an energetic rendition of “Veronica,” Costello, as he switched out guitars once more, Costello addressed his audience again.

“It’s time now to introduce my special guest for this evening,” he said, making his way over to the rocking chair. “It’s me.”

This segment of his set found Costello sharing, in a very story-hour fashion, a few memories of his father, Ross MacManus, who used to play with the popular big band the Joe Loss Orchestra. He was funny and sincere, and if the show didn’t feel as intimate as a living room before, it certainly did then.

He played a few songs from this spot, including the sweet “Walkin’ My Baby Back Home.” (This song, by the way, featured a flawless whistled verse for which Costello definitely deserves some kind of award.) And then he was up again, giving the crowd a reverb-drenched version of “Watching the Detectives,” which featured some impressively loud live looping (including a bit with a police siren). Costello looked like a kid playing with his favorite new toy. “Everyday I Write the Book,” which Costello introduced as “a song I hate,” got a similar treatment, before he took another bow and exited the stage.

It was only a few moments before he was back again, this time with Larkin Poe – Rebecca and Megan Lovell – in tow. Together, the trio delivered a powerful bundle of songs as the sisters provided harmonies and some lush guitar work (including a bit of electric mandolin). This was an inventive take on some of Costello’s catalog, including a gospel version of the most obvious song of the night, “Six Months in Kansas City (Liberty Street).” 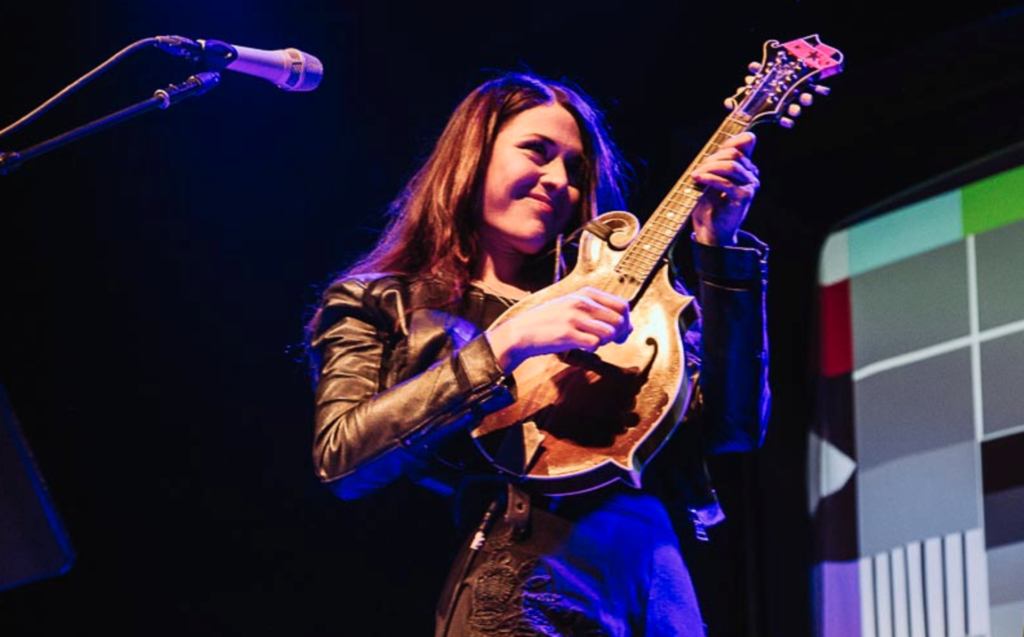 While the Lovells are extraordinarily talented – no, seriously, go take a listen, these women can shred – it’s also worth noting that the level of sound didn’t really change much with their addition. Costello, on his own on stage, has no trouble filling up the room with his music.

And it didn’t take him long to return to that format. At his second encore, Costello stood in front of the television set, the screen having been replaced by curtains. From here, it was a slew of grand slams – including “Pump It Up” and a fast-paced “Alison.”

At last, the third encore of the night found Costello back again with Larkin Poe, ending with the eternal classic “(What’s So Funny ‘Bout) Peace, Love and Understanding.” It was the most satisfying culmination possible. Beaming and bowing, Costello looked like he’d just had the best fun of his life. Well, so did a good portion of his audience. 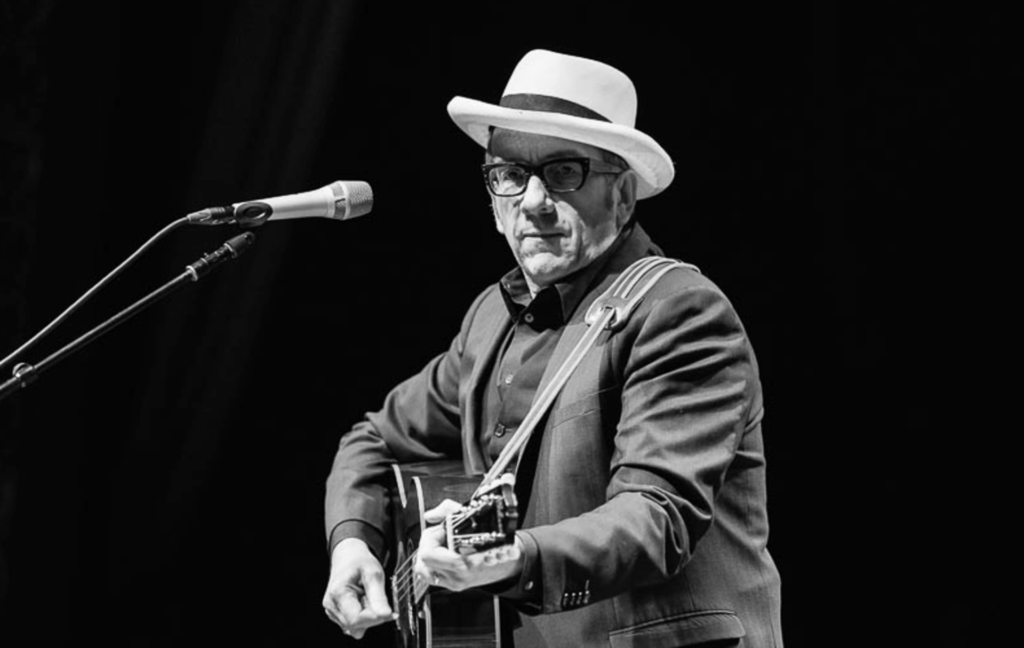 For more photos from last night, see our slideshow here.