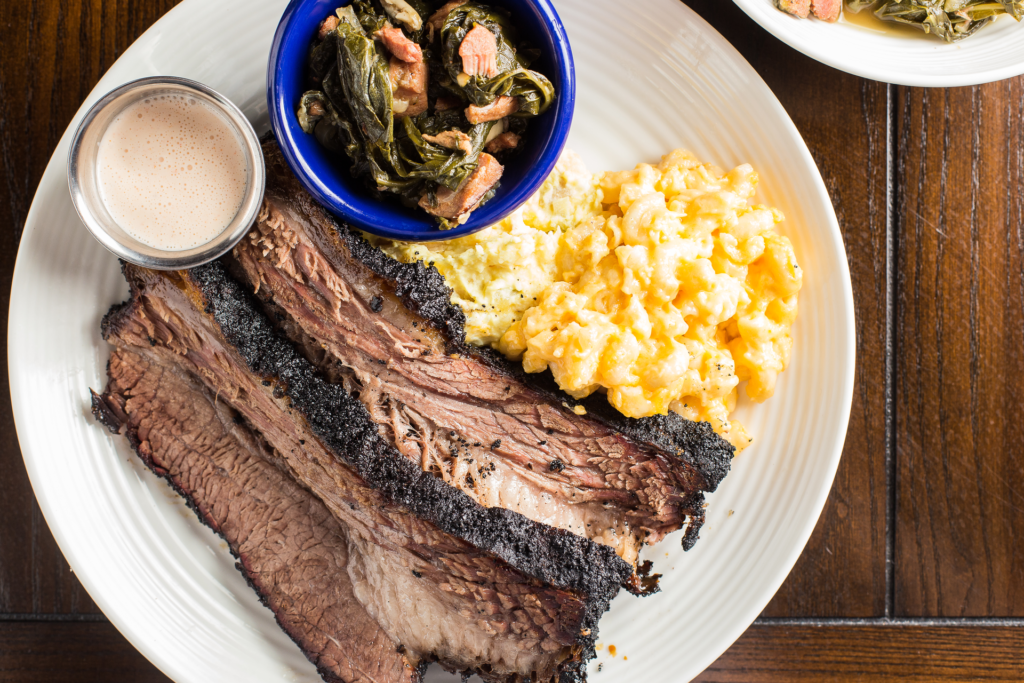 Some people love whale song. I prefer the white noise of a busy dining room. Not because it soothes but because it informs.

You can glean a lot about how a restaurant is doing if you listen to the buzz of conversation. Pay attention to the ease with which voices sail over the ambient clank of dishes and the pleasing hiss of a sauté pan. Gauge the day’s sales by the timbre of a server’s voice. Is it frantic, maybe, or hushed, with a stodgy-museum chill?

At EJ’s Urban Eatery, a lunch spot specializing in fine meats presented without fuss, what you hear in the air is a hit. Just a couple of months after its debut in the West Bottoms, people are here at times other places are dead. Your fellow diners sound pleased to be here, then delighted by the food, then quietly sated. Yes, some flavors will benefit from more time to develop, but already the execution is pinpoint-precise.

The restaurant is the brainchild of chef John Cedric Smith, whose restaurant bona fides include stints in Paris and New York and, around here, time at upscale haunts such as 801 Chophouse, Pig & Finch and the Jacobson. This new venture, with business partner Erik Gaucher, is decidedly more casual, styled after Southern “meat and three” cafeterias (one meat, three side dishes). Their 100-year-old building previously housed Jerry’s Woodsweather Café — once a blue-collar classic, later the short-lived Screaming Eagle Bar & Grill. Smith and Gaucher have made a few updates, including a new mural by Jesse Hernandez, but the workaday feel remains.

No one’s going to miss the Walmart-issue patriotism of its immediate predecessor, but one look at the crowded dining room will swell your chest (and your gut) with pride in the democratizing power of meat. On all three of my visits, the brick-and-wood-framed dining room burbled cheerily with a mix of casual and corporate patrons. The set-up mirrors the clientele, blending cafeteria casualness with full-service flair. Diners order meals at the host stand, choosing from a chalkboard list of specials, then receive drinks and desserts from a designated server.

This allows Smith and his staff to fix plates more quickly, a crucial advantage for those popping in over a regimented lunch break. The menu has a handful of rotating sandwiches and specials, such as a brisket grilled cheese on Texas toast that’s no-frills — unless you count as a frill slices of meat so enormous they test the bread-fusing power of a tasty cheddar-and-swiss blend.

But the raison d’eating is the meat and three. The espresso-rubbed smoked brisket is fatty and flavorful, with a well-seasoned bark and a peppery white barbecue sauce. Even better are breakfast ribs that come with pickled jalapeños and redeye hollandaise. The pork spareribs are a firmer, chewier style, rich with hickory and hammy flavor. Nothing’s in danger of falling off the bone — instead, Smith gives you the primal satisfaction of gnawing spice-bright meat straight off the rib.

But my favorite meat so far doesn’t come from the Great Plains. If I could have the shrimp with Creole and Guinness butter as my meat and my sides, I’d do it. The shrimp are Lane Bryant–issue: thick, supple, bursting with rich, buttery flavor. The sauce could be more assertive with the Creole spice, but the dish is nearly perfect as it is.

The sides are as home-style as you’d hope, with a few dressy touches. My roasted Brussels sprouts arrived nicely charred, with lots of caramelized sugars and a nutty flavor. The Creole fries I sampled were thick-cut, crisp and lightly spiced. And the mashed potatoes are consistently right: creamy-textured under a buttery gravy the texture of silk.

Still, the side to beat is the braised local greens, a tender mix of collards and turnip greens slutted up with smoky hunks of ham, fragrant notes of garlic and onion and a judicious application of vinegar and hot sauce. These are greens for people who imagine they don’t like greens. I don’t care if a bunch of collards broke into your home, squeezed the toothpaste from the top of the tube and flushed the cap down the toilet: Smith’s greens are so good, they redeem the very idea of the dish. They might be — gulp — the best in the city right now.

Not everything earns the same pardon. A few sides and specials I ate were inadequately (or confusingly) seasoned. The mac and cheese, for example, is comforting but too simple, with a flatly cheesy flavor profile that’s on-brand for cafeteria style but cries out for alium, some grated nutmeg, something off the herb rack. (I know it’s there; I ate those greens.) Ditto the potato salad, which never transcends picnic familiarity.

And I’m sorry to report that the Nashville hot chicken, a Thursday-only dish with which I’d made an excited appointment, was a frustrating date. The half-chicken was transcendently fried, with craggy, rust-red skin that stayed crisp and light. The white meat was so plump and juicy you could have run it through a citrus reamer, and the tender dark meat defied my fingers to keep off it, manners be damned. But here, too, the spice failed me; the blend on a recent Thursday was too bitter, almost tannic with paprika. And given that the “hot” here is calibrated for Midwesterners (tongue-testing but not tear-jerking), that bitterness overwhelmed. One of the central pleasures of Nashville hot chicken is the denouement: the sweet, stick-to-your-teeth white bread that comes underneath, soaked adultery-red with drippings from a five-alarm fowl. The spice paste at EJ’s made that ritual less compulsory the night I was there. But if Smith tweaks his blend, I’ll be back, ready to buy bigger pants afterward.

Dessert offerings on recent visits included Dixie pie and a red-velvet cake. If it’s available, order the white-chocolate bread pudding, a salty-sweet indulgence with the makings of a signature dessert. The white chocolate lends the bread pudding a fudgelike texture, dense enough to sponge up the accompanying warm caramel sauce without dissolving into mush. And the sauce itself is nutty and surprisingly delicate, trimmed with roasted pecans for a cozy fall feel.

The easygoing crowd during any weekday lunch is a testament to EJ’s early success. With a few flavor adjustments, the eatery seems likely to transcend its Southern roots and become a Kansas City classic.

Best bet: Order the Gulf shrimp in Creole Guinness butter for your “meat.” The braised greens, roasted Brussels sprouts and Creole fries are your “three.” You won’t have room for dessert, but order the white-chocolate bread pudding anyway.