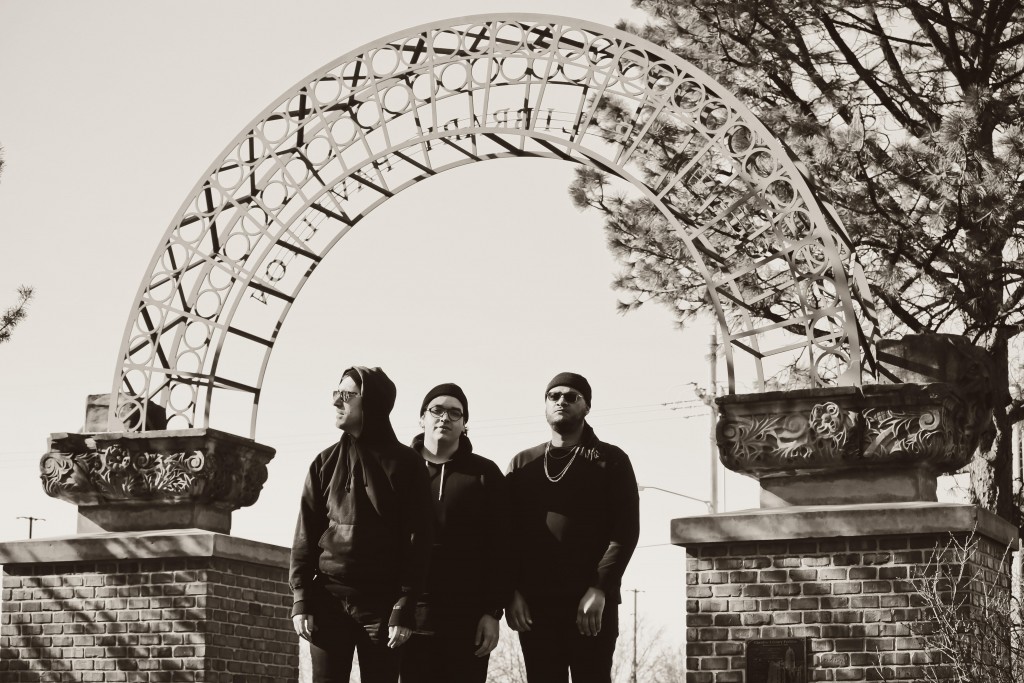 This Friday, Topeka and Lawrence rap trio, Ebony Tusks, will drop their first-ever physical release. The 7-inch single for “HDF” is a co-release between Intelligent Sound and High Dive Records, and in addition to being the first music from vocalists Geese Giesecke and Marty Hillard and DJ Daniel Smith, marks the first new tracks from the group in over seven years.

It’s a sonically-striking piece of music in both the vocal and instrumental versions and has us absolutely gasping for the Ebony Tusks full-length due out later this year. I hopped on the phone with Hillard ahead of the physical release to talk about the process of making this new track, and what to expect from Ebony Tusks going forward.

What led you to record at Sound + Vision?

Well, the reality was that our previous studio, Rundown Studios – that was located on McVicker, here in Topeka – that it shuttered when George [Valyer] moved to Lawrence. We had been recording out of his home in East Lawrence to wrap up the end of the album and it was something where I think he was eager to get into Sound + Vision because I think we were just a little cramped for space at his place and just kind of wanted to get a change of scenery. So, we scheduled some time there and had a couple of hiccups, but Joel Bonner was present and helped us work through a lot of them, which was great.

Do you find that recording in a public library space contributes to the grassroots element of the song itself?

You know, I never really honestly thought about that correlation. I would say that, overall, our recordings over the last three and four years have largely been done with a DIY focus. I’d say I feel like, if anything, maybe it certainly correlates to what our recording experience had been up to that point. I don’t necessarily know if – for that particular recording session – it had any deeper effects, but I do recognize the value of having a resource like that in a public forum, that anybody has access to. It certainly aligns with our values as a band and as a recording project.

What made you decide to go with “HDF” for this single: is it representative of the forthcoming full-length, or is it something that is completely different?

I thought it would be important for us to have some recordings outside of the album that just gave us a little more breathing room – a little more lead time before we put the album out. It just happened to be that this particular song, as we began composing it, sort of became this left turn from the album. I mean, I could say that in the back of my mind there was a conscious effort to create something that just showed another side of us than what the album did, but I was definitely pleasantly surprised at how it came out – and, you know, grateful that it just showcased us in a different way than what the album will.

I also thought it would be a nice leader for us to reintroduce ourselves, in a way, to people that have been with us and heard us and seen us over the last 10 years. We’ve always been writing and recording with the mindset of moving ourselves forward, sonically, and “HDF” is just another indication of that. I reread an interview that we did back in 2016 where we talked about negative space, and we talked about drones, and we talked about songs without percussion. It’s been really nice to know that we have a single and an album that reflects a lot of what we were aspiring to, even at that time.

It is really interesting because even though it does have like the drone aspect, it just feels like it is increasing as it goes along. It’s very dynamic.

We’re always looking for ways to establish dynamic, without it purely being quiet versus loud, or soft versus hard. I think that’s also reflected in a lot of the music that we’ve ingested from other artists in the last 10 years, as well – just being really intentional about creating a dynamic without it being the usual tools that you would use to achieve that.

The lyrics and the sonics of the track make it seem almost as if it’s building to a confrontation. I think most people would expect it to build towards like some sort of explosion. I think we’ve all been taught like to expect the drop or the jam or however you want to look at it, but it ends with almost a very Midwestern thing with the line, “please don’t shoot the messenger, I’m sorry, I don’t make the rules.” I like being startled and surprised by music, and this track very much did it. I think it kind of goes with what you were saying about trying to move on and trying to further the people who are familiar with your music. I thought I was, and then I heard this and I was like, “I did not expect that.”

That’s awesome. It’s funny that you had brought up the apology at the end, too, because that’s something that I’m always mindful of. I mean, there’s plenty of times where there’s a lyric I’ve written something with the phrase like, “Pardon me,” or “I’m sorry,” or “Forgive me,” and I think it’s interesting because, on a personal level – as much as it is intended to be sincere, it’s also like, “This is me asking for your attention in the most polite way possible, knowing that you know what I’m expressing – the substance of what I’m expressing, as well as the volume of how I express – it is going to be really startling,” so, in a lot of ways, I think I’m subconsciously trying to ease everyone into what the experience is going to be.

Every time I return to a phrase like, “Pardon me,” or “Forgive me,” or “I’m sorry,” that’s what I’m trying to do. Then, I just laugh at myself, because it’s not so much about asking permission or feeling like I need to ask permission for people’s attention – it’s just this is a part of who I am, and that’s how it comes out lyrically.

You had a video of your listening party for the test press of this single, and based on that, I’m taking it you’re very excited to have a physical release for this?

Absolutely. The last official release that we would have put out, digitally, was in October of 2012. The three of us, along with George, have worked really hard to establish a body of work that we feel good about putting out into the world, but then, also just feel good about, period. A big part of that was also working with Mike Nolte, from Eureka Audio Mastering, out of Portland, Oregon. Just being able to have George’s excitement and Mike’s enthusiasm and them hearing the tracks and helping us shape them to what we wanted them to be, was a really good feeling. To know that you know you’re working with people that are just as invested in this body of work as you are and wanting to manifest something good?

I would say the same thing for all the guest appearances on the album. We brought in people very intentionally that we knew would be excited to participate and also understood what we’re after. I mean, for me, personally, this is the first physical release I had been a part of in seven years. Partnering with High Dive and Intelligent Sound and doing some things on our own, I just realized that there is a timetable and that there are delays that that come up.

I just relearned how to be patient with the process and recognize that, from a psychic standpoint, that perhaps there’s a reason why delays occur. You think you this timing in line, and you have this long timeline, and sometimes, it’s better to wait. I’m definitely an advocate of waiting ’til things are ready and right, even if I don’t always feel that way.

Ebony Tusks’ “HDF” single is available now on streaming platforms and the 7-inch releases this Friday on High Dive Records. You can pre-order it at Bandcamp.

Release shows for “HDF” are Thursday, March 5, at ArtsConnect Topeka; Friday, March 6, at the White Schoolhouse; Saturday, March 7, at Mills Record Company; and Sunday, March 8, at Record Bar. Details on all those shows here.