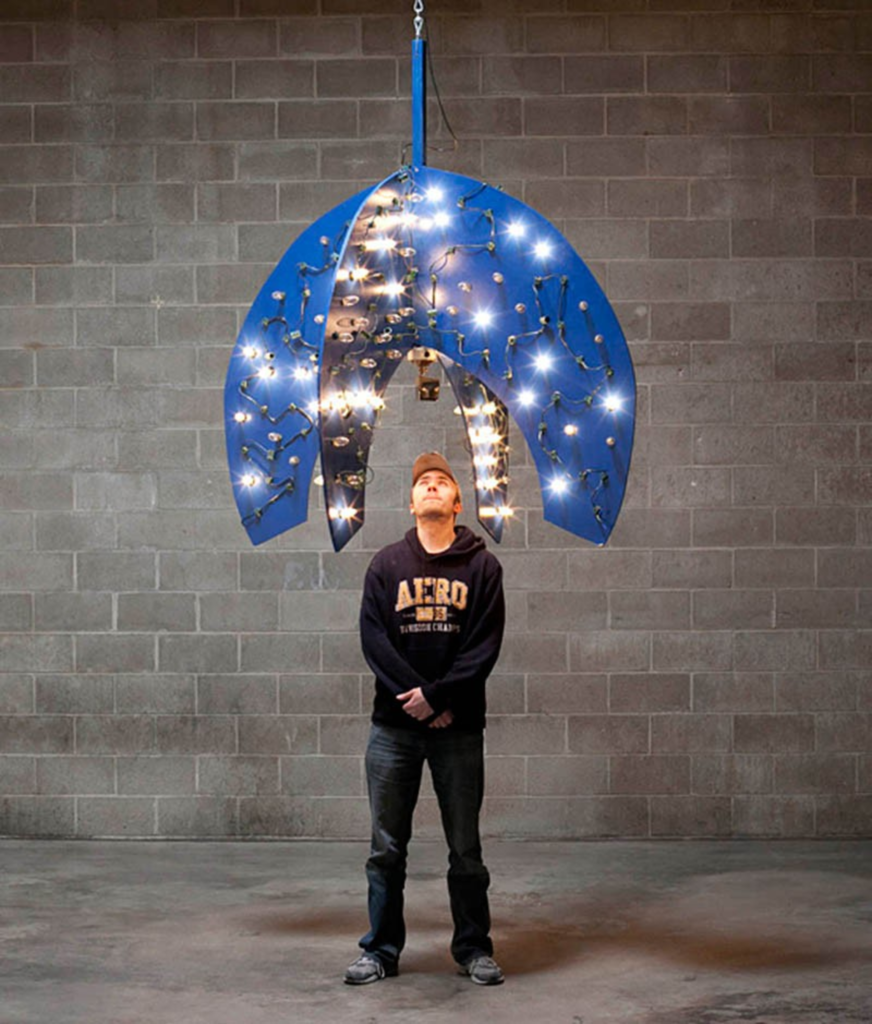 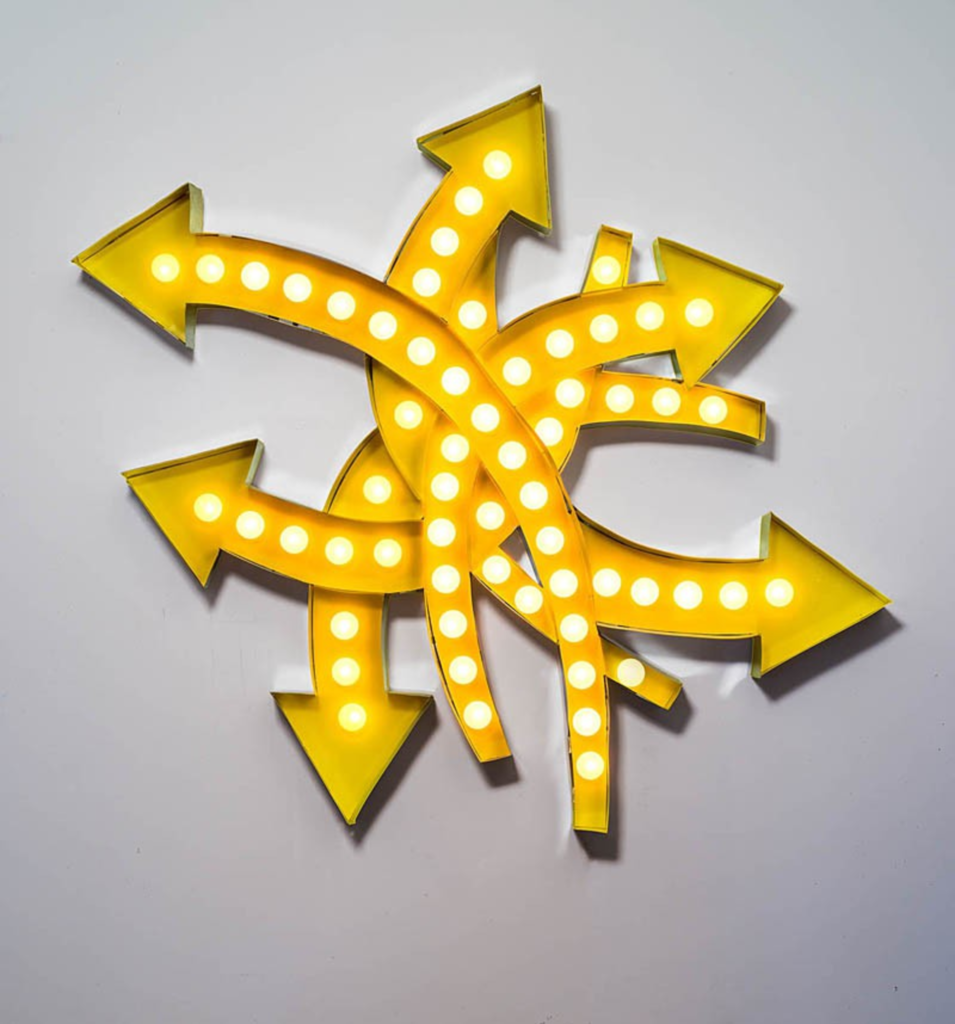 Until you read their titles, you might mistake the claw-shaped chandeliers, studded with old-fashioned Christmas lights, for alien helmets or some device ready to take over your mind. But go ahead, step under them. Dylan Mortimer’s “Motion-Sensor Halo (with Rays)” lights up, producing a twinkly aura that surrounds you with light. Anyone looking at you can see you glow, as if from within.

It’s a Sign! is Dylan Mortimer’s first solo exhibition as a resident of the Studios Inc., and he makes it a crisp and blocky expression of bold design. The show’s title shouts out at least two meanings. One is a plain announcement that these objects are merely signs, sharing a bloodline with every other ubiquitous indicator of shops, services and situations. And, considering Mortimer’s open-faced Christian faith, there’s also the suggestion that a higher power stands ready to convey a message through some symbolic presentation. (His artist’s statement leans this way, saying this body of work shows “signs” of his “journeys and struggles with faith, health and life.”)

A young pastor who is also an artist, Mortimer is too articulate and unassuming to force a belief system on the viewer. He told people at a March 9 talk that this is simply “a show where [he could] chill out a little bit.” He’s a seeker who knows that there are no solid answers, and Sign is open to interpretation.

Mortimer has studied the history of art depicting holy persons with halos — ancient, Asian, Christian, Western. ” ‘You are the light of the world’ is a potentially confusing statement,” he told his March 9 group. “My perception of that whole chapter starts with ‘Blessed are the poor in spirit.’ But what about being poor in spirit is blessed? I take it as Jesus is coming to you. So even if you are poor in spirit, you are the light, you have worth enough to deserve glorification in that sense to the creator.”

Mortimer said that turning that idea over and over reveals “the messiness of the Gospel.” There’s free will, after all, and the audience that day shared a fairly lengthy discussion about the concept of being enlightened, projecting light, choosing paths in life. This was also Mortimer’s work revealing its broad relevance.

Sign disperses nine constructions, each of substantial size, around the cavernous gallery space in a way that allows each to be viewed and considered individually. The halos find a natural background here, suspended over the concrete floor against cinder-block walls, with industrial lights towering above. The white walls provide plain backgrounds for Mortimer’s signs, erasing any visual static that would come if they were attached to some building’s exterior. Inside the gallery, without the clutter of unwanted context, the ideas on display can be contemplated purely.

After 15 years of earlier work that incorporated words and phrases, Mortimer here goes with the concept of selling an idea (or sharing one’s deeper convictions and beliefs). To execute these ideas, which he has selected from sketches in Adobe Illustrator, he has engaged a host of assistants for the fabrication. (The credits section of his statement includes about 50 people who helped launch this show in some way.) The slight variations in craftsmanship reflect different skill levels as well as some experimentation and learning, and the pieces hold up well as a whole.

They are, in part, functioning as sketches for public art that Mortimer would like to see take shape in the future. His process this time started with arrows, a reference to a phrase from Chapter 3 of the Gospel of John — in which the wind is said to blow where it chooses and has a sound but is something we can neither source nor predict. “In a sense,” he said March 9, “you’re being guided to some degree, though you have no idea what’s to come or even necessarily an understanding of what was before.” The arrow forms suggest this feeling. “All these different directions are happening, but it’s being held together,” he explained. “There’s a sense of direction in the seeming directionlessness of it.” This, he added, represents how he feels about life and all its craziness.

There are two signs made of these interweaving arrows, painted to look almost like burnished gold. Welded aluminum frames are inset with round, incandescent white light bulbs, running the length of the gilt arms. The effect evokes nostalgia — for the old Las Vegas strip, mid-20th-century Times Square, carnival rides.

“Pneuma” is a stack of six swooping arrows, each pointing in a slightly different direction. The word is Greek for breath, but through years of religious interpretations has come to mean soul or spirit. Its companion work, “Ruach,” is named for the Hebrew word for the same thing, and its eight arrows jut out in straight, stiff projections. The subtle curve of some light bulbs at the center keeps the piece from perfection, allowing the suggestion of organic variation, of uncertainty.

One of the largest works is an aluminum-frame sign representing a cartoonish spatter of blood, blinking with a Lichtenstein-dot fill of red bulbs in a hue of the most oxygen-rich blood. Mortimer knows that blood has as many possible connotations as light, but he has been clear that his aim here is not to glorify violence or ill health but to express the sheer reality of those things.

A companion piece is easy to read as an exclamation point of dripping life (echoing the show title’s punctuation), a reminder that there can be meaning in spilled blood. What the body spends need not be lost in vain.