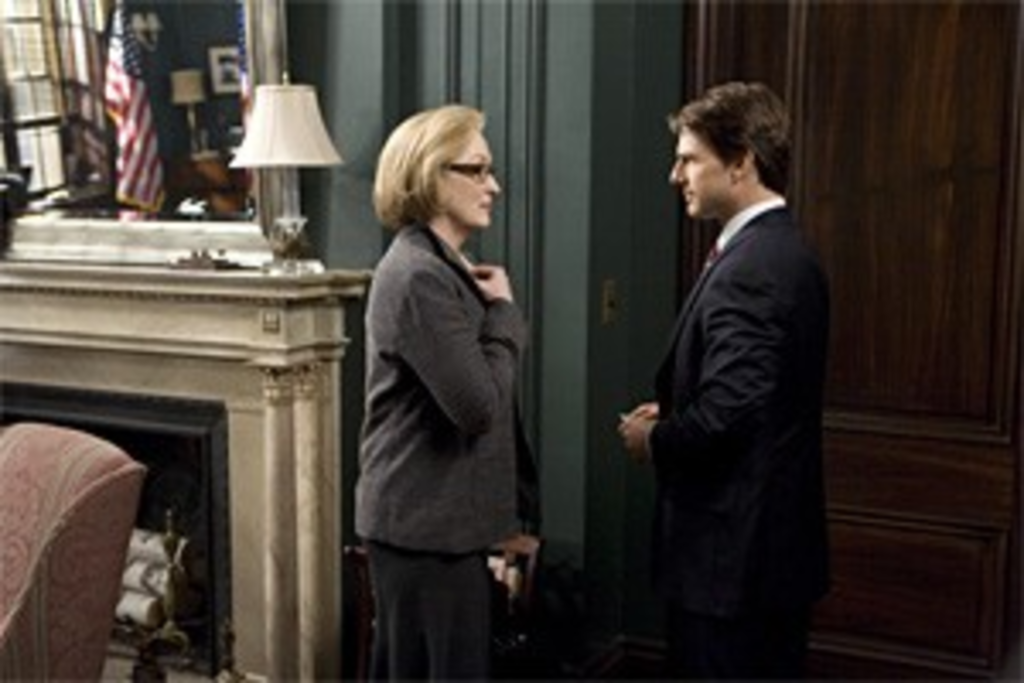 Less a war drama than a set of dueling position papers, Robert Redford’s Lions for Lambs may be the gabbiest movie ever made about American foreign policy — and it wasn’t even written by Aaron Sorkin. Hot young screenwriter Matthew Michael Carnahan is fresh off his alpha-male script for The Kingdom. That helps explain the presence early on in Lions for Lambs of Kingdom director Peter Berg, who strides around Afghanistan in a buzz cut, barking to his noticeably minority soldiers to show the enemy “the full measure of American mean.” Compared with facing the meanie back home in Washington, D.C. — a Republican hardbody played by Tom Cruise in crisp white shirt and oodles of blind ambition — the war zone over there is peanuts.

We find the senator in his office, hectoring a tough old broad of a journalist in comfy ’60s-liberal tweeds (Meryl Streep) about the need for a surge to end all surges in the Middle East. She lectures him right back on the folly of U.S. warmongering. To drive the point home, we head to “a California university,” where a world-weary professor and Vietnam vet (Redford) cuts a deal only a celluloid academic could make without losing his job. He promises straight B’s to a disaffected, failing student (played with cocky insouciance by the young actor Andrew Garfield) on the condition that he cast aside sloth to become all that he can be against the war.

For a movie so relentlessly bent on realism, Lions for Lambs is riddled with implausibilities. Would a rising young Republican with an acquisitive eye on the presidency choose a liberal reporter with the stubborn intractability of a Christiane Amanpour to push his latest war on terror on the American public? Are today’s college youths really as politically lethargic as this privileged white boy? Would his star classmates, an African-American (Derek Luke) and a Latino (Michael Peña), having bootstrapped themselves out of East L.A., chuck it all and blithely join the Army in order to become the movie’s conscience? “I did everything I could to stop them,” the professor intones. “But I revered the reasons they went.” Easy for him to say.

Known for making stately, linear films with lovely sunsets and 60 Minutes dialogue, Redford has none of the piss and vinegar, the technical bravura or the hip irony of younger directors making political films, such as Stephen Gaghan or Paul Greengrass. His editing is artless, the action scenes listless and amateurish, the characters almost entirely representational of the political attitudes they strike. Researched, data-crunched and op-eded to the hilt, Lions for Lambs talks and talks and talks your head off — the movie feels twice as long as its trim 88 minutes — as it lumbers toward a gravely inconclusive ending.

The movie is awful ­— but also oddly touching, even adorable in its dogged sense of responsibility, its stubborn refusal of style. When you’ve seen as many showoff movies as I have that use the war as a convenient peg on which to hang a thriller (including The Kingdom), there’s something refreshing about a movie as earnest and well-briefed as this one. Redford is no intellectual, but I found myself unaccountably charmed by his lack of cynicism, his oldfangled desire to plead the case of ordinary people caught up in the reckless aggression of the powerful. Lions for Lambs may not be much of a movie, but in the face of such sweet sincerity, what can you do but roll over for it?