In 2017, the NAACP issued a travel advisory in Missouri warning Black people not to drive because of racial discrimination and attacks. A year later composer Susan Kander, a Kansas City-native that now lives in New York, and librettist Roberta Gumbel, also a KC native and a professor of voice at the University of Kansas, premiered dwb (driving while black), which was inspired by the advisory and Roberta’s personal fears about her son being able to drive.

“So that happened while Roberta and I were discussing what should we write about,” Susan says. “The whole world was available to us and we cycled through quite a few ideas. But this was the one that seemed really pressing and personal and fit the sound world.” 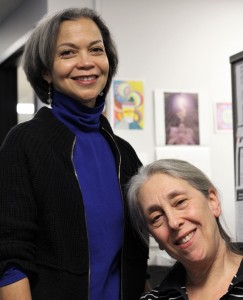 The 45-minute opera focuses on a Black mother as she raises her son and the growing fear she has as he reaches driving age. Throughout the opera, news bulletins about the deaths of Black men like Trayvon Martin remind the audience just how present and legitimate the fear of racial discrimination is.

“The story isn’t just about the news,” Roberta says. “It’s really a personal story. What we see in the news is usually after something has happened. But the mother’s story is what she’s anticipating could happen. It’s the fear she lives with as she reads the news. So, anyone watching it with any kind of empathy understands why she has every right to be concerned. You don’t have to be white or Black to understand that.”

Recently, dwb has been picking up attention again, and its message has never been more relevant with movements like Black Lives Matter. A report done by the Missouri Attorney General’s office showed that Black drivers are 23% more likely to be pulled over than white people. A separate study done by the FBI in 2020 showed that Black people were targeted in hate crimes more than any other group in the United States.

Roberta and Susan hope that dwb helps provoke change, brings awareness to the systemic racism that still exists, and breaks down stereotypes surrounding the Black community.

“The recurring theme, the recurring words, that go through the opera are ‘you are not who they see,’” Susan says. “If we can help people see individuals rather than some fuzzy stereotype, if they can even think about that and internalize it to some extent, that would be useful.”

“Once you’re aware of it then you have a responsibility, if not to march and wave banners and defund the police, then at least to understand and talk about it enough that the people who are the perpetrators start to get the message that it’s not okay,” Roberta says.

But why did Kander and Gumbel choose opera as the format to tell their story? Susan says it’s because it is the language they both share. However, that doesn’t mean it fits the stereotypical idea of what opera is.

“If you haven’t been to the opera before and have the idea that operas are about highly costumed, grand, old-fashioned stories you should know that that is not what dwb is,” Roberta says.

“The music’s purpose is to tell the story,” Susan says. “It’s not to say, ‘you are at the opera now, please dress up and sit up straight.’ It’s not like that at all. It’s that this is the best way we could use opera to make it emotionally dynamic and intimate for the watcher, the listener, the audience.”

Lyric Opera of Kansas City will be hosting a free stream of dwb on Saturday, June 18, at 10 a.m. Visit  kcopera.org for more information and to view the stream.