Drink This Now: the Cobbler’s Daughter and Spanish Harlem at República 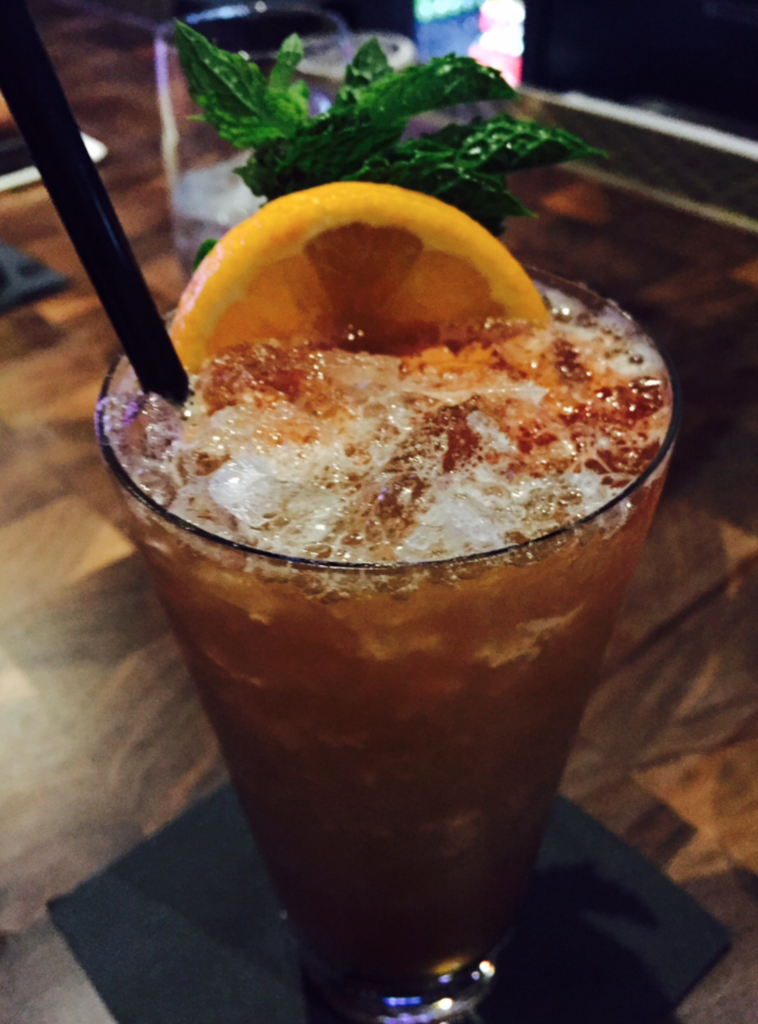 Unable to resist the call of something shiny and new, I decided a visit to República was in order. The newest Bread & Butter restaurant opened on the Plaza at the beginning of this month, and I felt the promise of delicious drinks when I heard that local barman and consultant Scott Tipton had accepted the position of beverage director there.

One drink, called the Cobbler’s Daughter, caught my eye immediately. The menu listed it as containing two sherries — Amontillado and Pedro Ximenez — as well was Pierre Ferrand dry curaçao, pineapple syrup and Angostura bitters. Sherry has been trending in the cocktail world for a hot minute, but this seeing a drink that relied so heavily on the spirit was rare. Sherry, a fortified wine indigenous to Spain, makes sense at República — and there is a hefty sherry program offered — but I wasn’t sure how such a liquor would interact with all those other flavors. 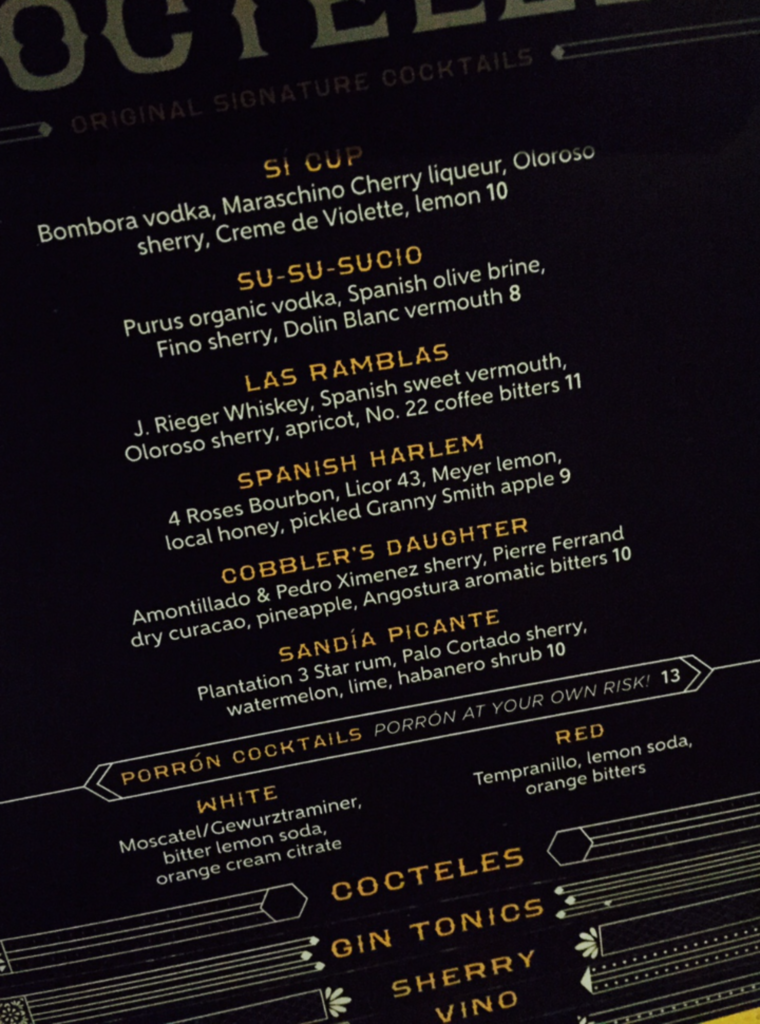 “I felt like it was an opportunity to do a sherry cobbler of sorts,” Tipton tells me, referring to the classic cocktail. “The base of the sherry cobbler classically is sherry being the spirit, fruit, sugar and crushed ice. There’s some lime juice to bring acidity, as well as the curaçao, which is basically an old school orange liqueur. And then, sherry has that natural funk to it, so we needed to balance all that funk with some fruit. We used Pedro Ximenez, which is the one of the sweetest sherries you can find, and we make a pineapple syrup using fresh juiced pineapples to bring some of that out. We actually put the bitters on top to break up the sweetness of the sherry and bring some bitterness to it.”

Tipton also shared this fun fact in relation to the classic sherry cobbler recipe: “It’s actually the first drink that started a straw, as crazy as that sounds. There was a Charles Dickens novel that talked about drinking a sherry cobbler through a straw [The Life and Adventures of Martin Chuzzlewit] and drinking it until it’s gone. So we went with that.”

Tipton’s homage to the humble cobbler turned out beautifully — but even more impressive, this drink was interesting. I don’t usually consider sherry to be a refreshing spirit, but the Cobbler’s Daughter was bright and packed a fruity punch. I like to think I maintained a semblance of grace as I did, indeed, slurp it down like a slushy.

I also sampled the Spanish Harlem — a drink containing 4 Roses Bourbon, Licor 43 (a Spanish liqueur made with fruit and spices — a bit like Bénédictine), Meyer lemon, local honey and pickled Granny Smith apples. 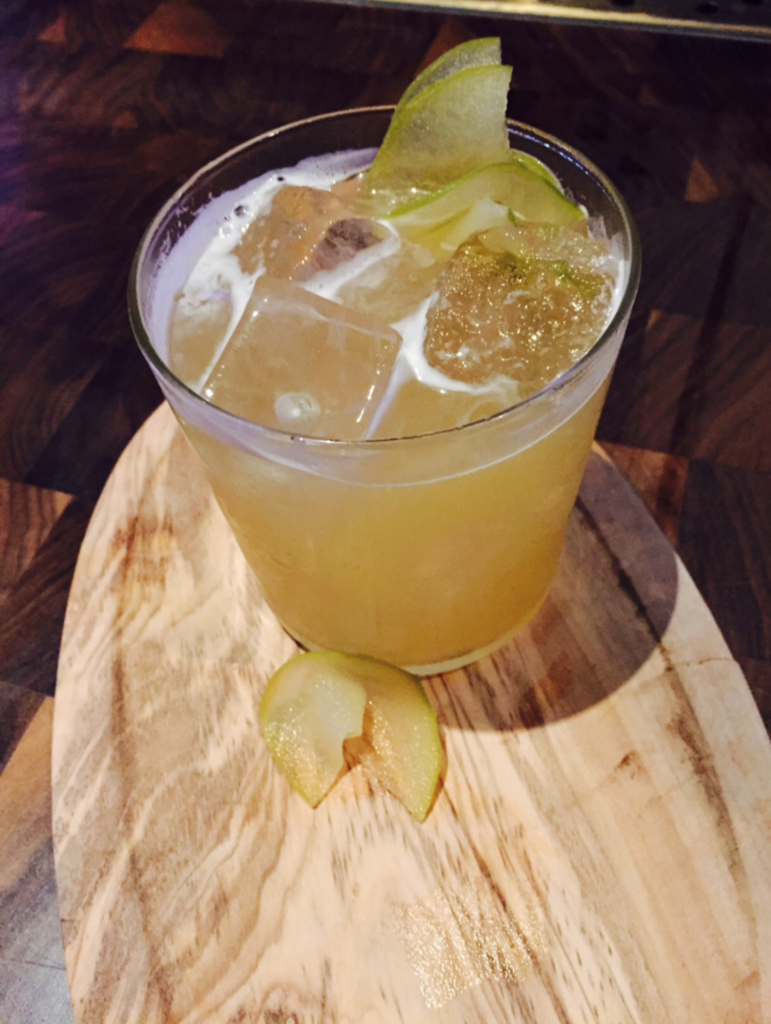 “Licor 43 has vanilla and cinnamon undertones,” Tipton says. “it’s super-sweet, and I knew I wanted to use it — and the best way, I thought, would be to do it in a whiskey sour. Meyer lemons are not quite as acidic as your classic lemon, so you’re bringing in a little more sweetness with that, to play with the vanilla notes.”

The Spanish Harlem hit heavy on its whiskey sour inspiration — lots of sour at first, like a Warhead. A few sips later, that evened out into a gentle, tender sweetness that closed out the drink. A few other drinks on the list looked intriguing — particularly the Las Ramblas, which features Julie Ohno‘s No. 22 coffee bitters, developed especially for República — but, you know, weeknights and all. Next time.