Dramatic acts of protest in the Coterie’s Rise Up 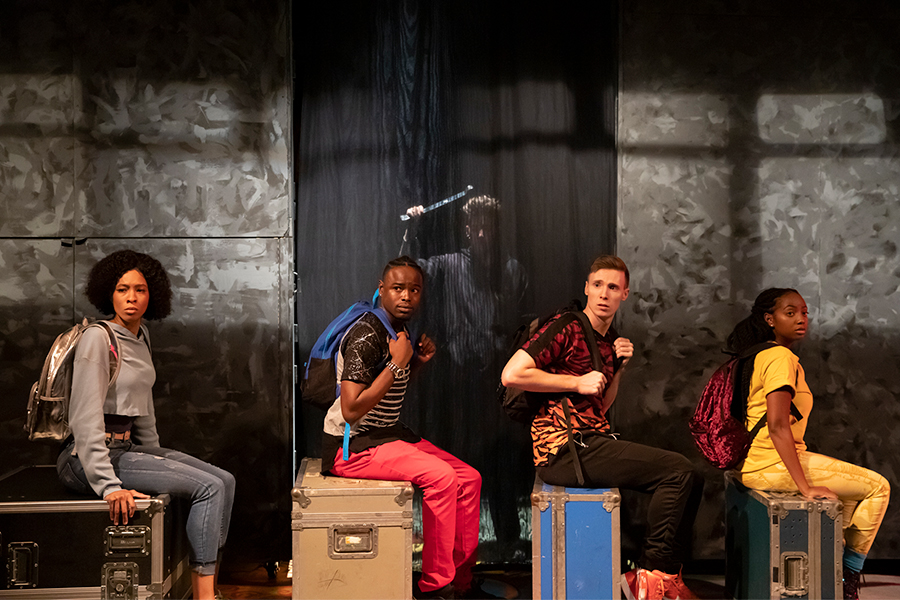 From left: Combs, Love, Luty, and Coppage on the bus // Photo by Erin Stricker, courtesy of The Coterie Theatre.

It’s probably a coincidence that The Coterie Theatre’s Rise Up opened the same day as the global climate strike. Rise Up isn’t about climate change, but it’s another striking demonstration of youths bringing international attention—maybe even change—to a cause.

In the play, college students and young adults join with other activists to push against a status quo—in this case, entrenched racial segregation. Playwright Lisa Evans, in an interview with the U.K.’s Theatre Centre, says she wants to show how Freedom Riders “decided they could change their universe in a nonviolent way.” The fact that Evans is British reveals the reach and legacy of the Freedom Riders, who acted to integrate interstate buses and trains, and the stations’ waiting rooms and restaurants, in the Deep South in 1961.

The Theatre Centre presents “big ideas and difficult questions that can help young audiences make sense of a complex and changing world,” says its website. With Rise Up, the Coterie, too, continues to deliver stories to student audiences that delve into history and issues around civil rights and fair-mindedness.

After the U.S. Supreme Court ruled, in 1946, that racial segregation on interstate buses was unconstitutional, and then, in 1960, that whites-only restaurants and restrooms in bus terminals also violated federal law, white and black riders, called Freedom Riders, boarded buses in Washington, D.C., and headed south toward New Orleans, their “world framed by bus windows.”

For ages 11 and older, Rise Up encapsulates the months-long act of civil disobedience into a slick, 70-minute summary that hits on the movement’s players and events. Director Jeff Church deftly oversees a swift and smooth montage of vignettes, with insertions of music and spoken word, that pops with the personalities of those involved and the episodes surrounding their story.

The buses never made their intended destination. Law enforcement in the South did little, if anything, to protect the riders from angry white mobs, and the protest became life-threateningly dangerous. Hundreds of riders were unlawfully arrested, even imprisoned, if not nearly killed. 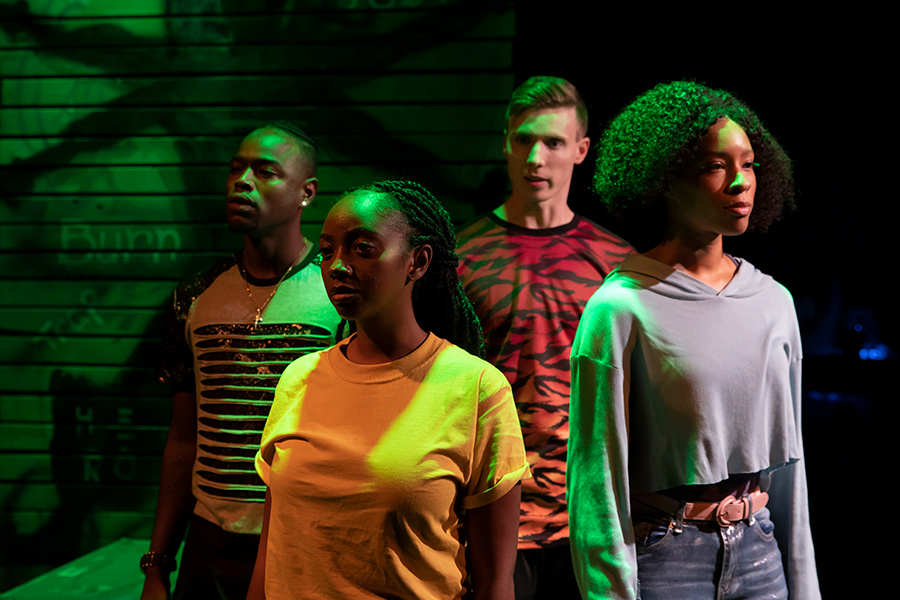 Photo by Erin Stricker, courtesy of The Coterie Theatre.

A small ensemble of four actors portray so many characters, you’d think there was a larger cast. They appear, at the start, as modern schoolkids—Em (Catera Combs), Dayz (Khrystal L. Coppage), Ty (Jay Love) and CJ (Jordan Luty)—together presenting a class project on the Freedom Riders. Their teenage personas submerge so quickly into the multiplicity of people and scenes telling the story that we nearly lose sight of the narrators themselves (who reappear from time to time, as though coming up for air). That initial vagueness between current-day and 1960s characters may be a slight demerit to the script but it’s no docked grade for the actors, who do such good work.

Evans captures that protest movement’s political angles and hot points in clear and colorful snapshots. She bases the play on real events, with a mixture of fictional and historical figures. Cast members skillfully shift among characters, sometimes within the same scene.

Rise Up is an inventively told enactment that pinpoints the people and pieces of a courageous political movement that rallied change. It’s history that informs the present and powerful storytelling that points to the possible.