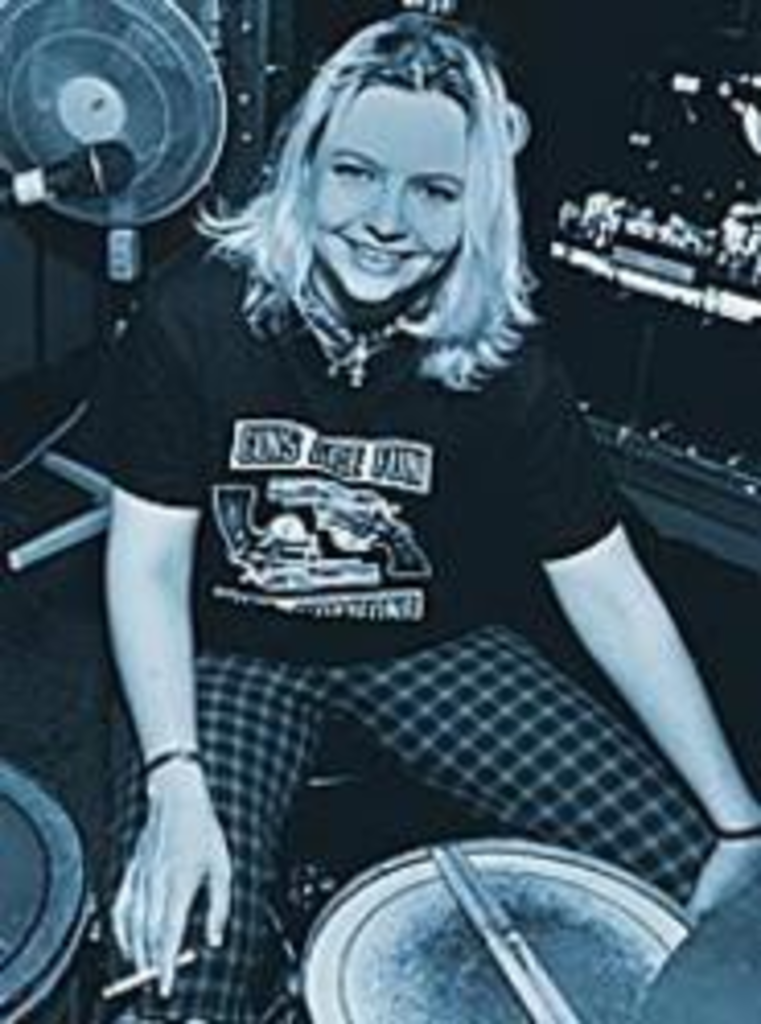 Contrary to the “rock star” mentality being nurtured in the growing garden of MTV’s music for vegetables, numbing our collective musical palate with fruity bubble gum flavors and manufactured sound bites, not everyone wants to be a rock star. Just ask Amy Farrand — Kansas City’s alternative to assembly-line musical parts and mass-produced fast food sounds.

Those spending time with Farrand should be prepared for a handful of interruptions between sitting down to talk and standing up to leave. The ubiquitous musician has a familiar face in Kansas City, and her appeal accentuates any room she’s in. She’s simple, unadorned, and just straight-up fun to talk to. Her music captures real life in an increasingly plastic world conducive to Hollywood hype.

Farrand started playing in the Kansas City music scene when she was 15; now, almost 11 years later, she is in four local bands: Sister Mary Rotten Crotch, Big 4, The Denied, and Amy Farrand and the Gospel Sensation. She also takes part in Brother Ike’s Rural Grit Happy Hour — a melee of music open to anyone interested in playing — and Ernie Locke’s Hump & Bump weekly at the Grand Emporium. She’s one hell of a musician, but make no mistake: She is not a rock star looking to buy all the right moves at the musical mall of America.

“Once you hit that rock star level, you’ve forgotten why you started playing,” she says, “or maybe you’re one of those people that started playing because you wanted to chase titty and get drugs and party all the time, and if you did, then you’re wrong, you’re fucking wrong.”

To Farrand, music should always be honest and entertaining; she’s not out to change the world or front some activist’s cause. “I used to think that I’d get up there and write some deep songs with some message behind it. That’s bullshit. People don’t want to get preached to; they want to drink beer and have a good fucking time. I can say my piece, but I can’t change the world. It’s all self-indulgent. It’s like coffee and cigarettes and sex. That’s all it is.” She laughs, thinking about the never-ending ego that can come with being an artist of any sort. “I try not to take myself too seriously, especially on stage. I kind of like to be a jackass and have fun and goof around with it. If every song was a heart-wrenching tear-jerker song, you’d be, well, you’d be Morrissey. And my hair won’t stand up like that.”

Farrand started playing music when she was a kid. Her mom and first stepdad were in country-rock cover bands, so she was around it all the time. “I was this little kid trying to go to sleep because I had school in the morning. Meanwhile this honky-tonk band practice is going on in the basement, and so I was force-fed in a way.” It didn’t take long for her to find her own musical expression. “When I was 7 years old, my mom and my stepfather got me this piece of crap toy Muppet drum set, and it was made out of like paper and paper clips,” she says, breaking into laughter. “I played that thing for a year and just beat it to death, just pummeled it, nothing but shreds left of it. So after that they decided, ‘Okay, let’s get her a real drum set.'”

Her quick wit and ability to see past pretensions may be what make her a charming and versatile musician. From punk rock to old-school country and blues, she does it simply for the love of it. As her song “Dragon Woman” says, she’s tough and in charge of her game, doing it her way: You judge me by what I have, not by what I have inside / you say I’m breathing fire every time I speak my mind / a woman with an opinion is just a bitch with something to prove, but you’re afraid of this dragon woman, because I have no use for you.

Some might wonder why anyone would devote so much of her time to music, not wanting to reap the perks of being a rock star. “A musician plays because they love the music. Musicians will be the type of people that will live their entire lives, playing the music they love, and they will die poor, broke motherfuckers and be completely content with that. That is a musician. A musician will set up and play on somebody’s front porch for five hours, drinking some cheap-ass distilled whiskey in the middle of the afternoon getting mosquito bites and love it the whole goddamn time!”

Hear Amy Farrand and the Gospel Sensation, Thursday, April 6, at the Grand Emporium. Show starts at 9:30 p.m. She and her boys (Claes Lillig, Rob Vitch, and Darren Welch) will play with Boothill and Velvet Freeze.