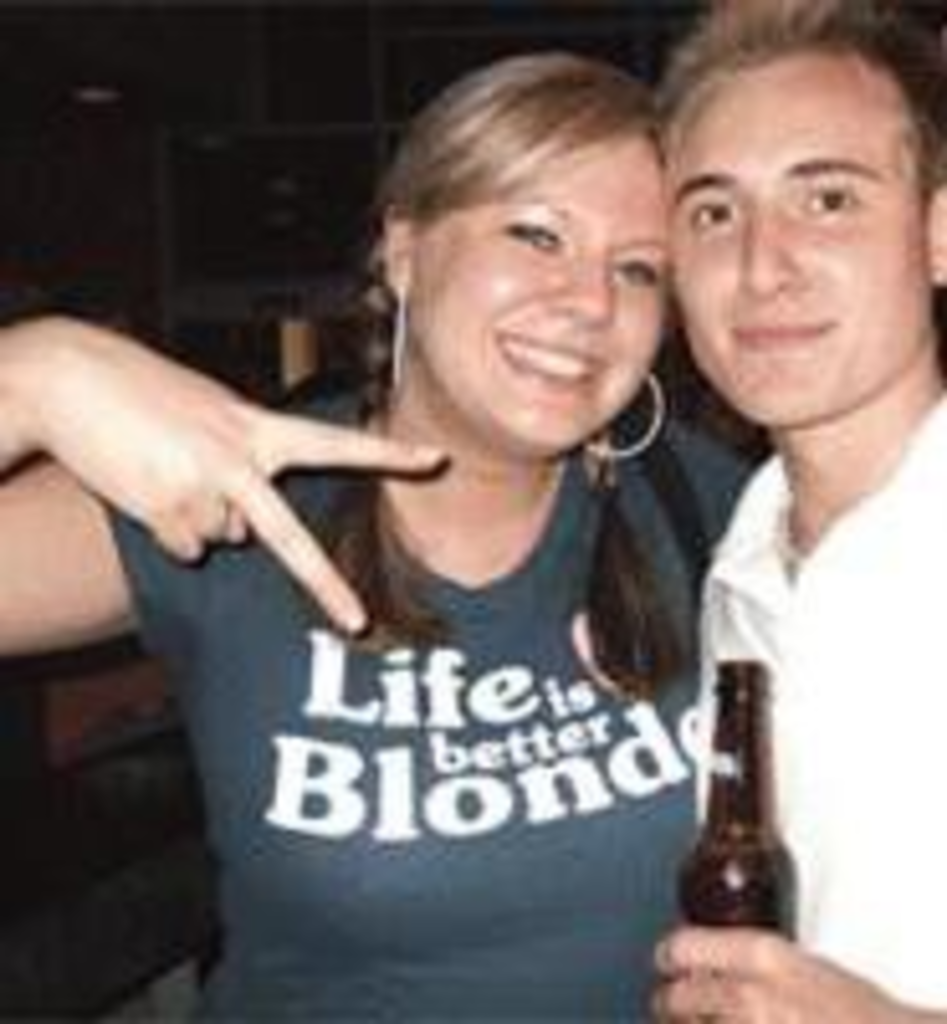 OK, fisticuffs weren’t involved. When we heard the commotion, we spun around to see two medium-sized guys — Green Shirt and White Shirt — facing off. Words were exchanged, but before things heated up, a couple of guys stepped between them, and White Shirt stomped away.

We went up to Green Shirt, who seemed a bit shaken, and asked what happened. “The guy freaked out about nothing!” he replied. “He thought I tried to trip him. I wasn’t starting shit with anyone!”

Just another testosterific night on the town in KC.

Revolver, a Mexican café-slash-official bar of KQRC 98.9 (“the Rock”), had opened the previous week in downtown Overland Park next to our favorite sports bar, the Other Place (which is owned by the same guy). We figured that the place would be Johnny Dare’s part II, minus the giant silhouetted mudflap girls and the glorified trailer-trash theme of Dare’s failed Westport bar. Whatever its deal, we were pleased to see another watering hole in downtown OP. With four bars now within stumbling distance, we’re thinking future pub crawl or new drinking hot spot. Maybe.

We paid a visit (and a $2 cover) around midnight on a Friday with Research Assistant Erik. Revolver’s décor leans toward swank. Painted flames decorate the windows, and a set of sliding supermarket doors lead to the back bar area. This spacious room contains red walls, a red floor and a raised platform ledge that runs the length of one wall under a giant video screen. That’s where the chickies are supposed to get up and dance, adding a Coyote Ugly touch. The lighting system is pretty impressive, with bullet-shaped ceiling lights that change colors and flash with the music. Also entrancing: the white plastic panels behind the shelves of alcohol. They, too, change colors, beckoning drinkers to sample the alcoholy goodness.

We flipped through a sticky menu of martinis and other froufrou drinks and ordered a $7 Mai Tai. The menu promised that the bar would put its own special spin on the classic. We weren’t sure what the halter-topped bartender did with it, but it tasted like candy filled with different liquors — plural — which is all we cared about.

The crowd provided some good people-watching. Near us, a meathead-type in a striped polo shirt air-guitared frantically. “I thought I was the only ’80s holdout here, but Jesus Christ,” a guy at the bar said about the meathead. Actually, there was a lot of air guitar from the guys and the ladies as well as some heartfelt singing to Metallica’s “Enter Sandman” and Guns N’ Roses’ “Sweet Child O’ Mine.” We had to give the DJ kudos for spinning crowd-pleasing stuff. Usher’s “Yeah” and Prince’s “Gett Off” got the grinding started on the platform.

One of the most passionate singers turned out to be a guy sitting near us at the bar. During “Enter Sandman,” he pointed to the Night Ranger as he sang, Gripping your pillow tight. When Twisted Sister’s “We’re Not Gonna Take It” came on, he straddled the rungs of a bar stool and bellowed the lyrics as he pumped his arms to the music. He told us that he goes by BBJ — Big Black Jeff. He also shared that he’s single, lives in Olathe and was there to have fun with his hot chick friends.

We asked if he could share any embarrassing stories. “Sweetheart, I’ve had a lot of embarrassing things happen, and I don’t consider it embarrassing,” he said. “It’s all part of the BBJ experience. If you party with me, you have fun.” He then stuck out his tongue and — holy crap! — it was probably the size of Gene Simmons’.

We then spotted Whitney, a 22-year-old hairdresser clad in that pro-blonde T-shirt. She verified that life is indeed better for her. “You get away with a lot more,” she said. “More guys look at you.”

Through Whitney, we met a couple of her guy friends, 26-year-old Kris and 27-year-old Bobby, who dated one of her friends. Kris fuels jets at KCI and directs planes to and from the gate with those orange batons. RA Erik asked if Kris keeps a pair at home so that he can direct the ladies to, say, go down. Kris said no.

Bobby then revealed that he is friends with Green Shirt. Aha! Bobby elaborated on the fight story. White Shirt, who was also the DJ that night, tripped as he was walking by Green Shirt. The DJ thought Green Shirt did it on purpose. Green Shirt apologized, but the DJ wouldn’t shake his hand. So Green Shirt hand-wrote an apology and sent it to the DJ booth. We wondered if it read something like: “I’m sorry. Will you forgive me? Check [ ] for yes or [ ] for no.” When Green Shirt left, he called out an apology again, but the DJ had a look of disdain on his face.

We had to get the DJ’s side of the story, so after the bar cleared out, we went up to the booth and met Mike. He’s been a DJ for about 12 years and used to work at American Bandstand Grill. He genially explained that Green Shirt didn’t get out of the way as he was trying to get through the crowd. GS then laughed with his buddies about the alleged tripping, and Mike didn’t think that his apology was sincere. “That’s cool, though. No sense in keeping a problem all night long,” he said. “One person’s problem shouldn’t be everyone’s problem.”

Or, in the immortal words of Axl Rose: All we need is just a little patience. We’ll stick to our guns on that.