Douglas Schwietert’s We Sell Memories is a beautifully unresolved valediction 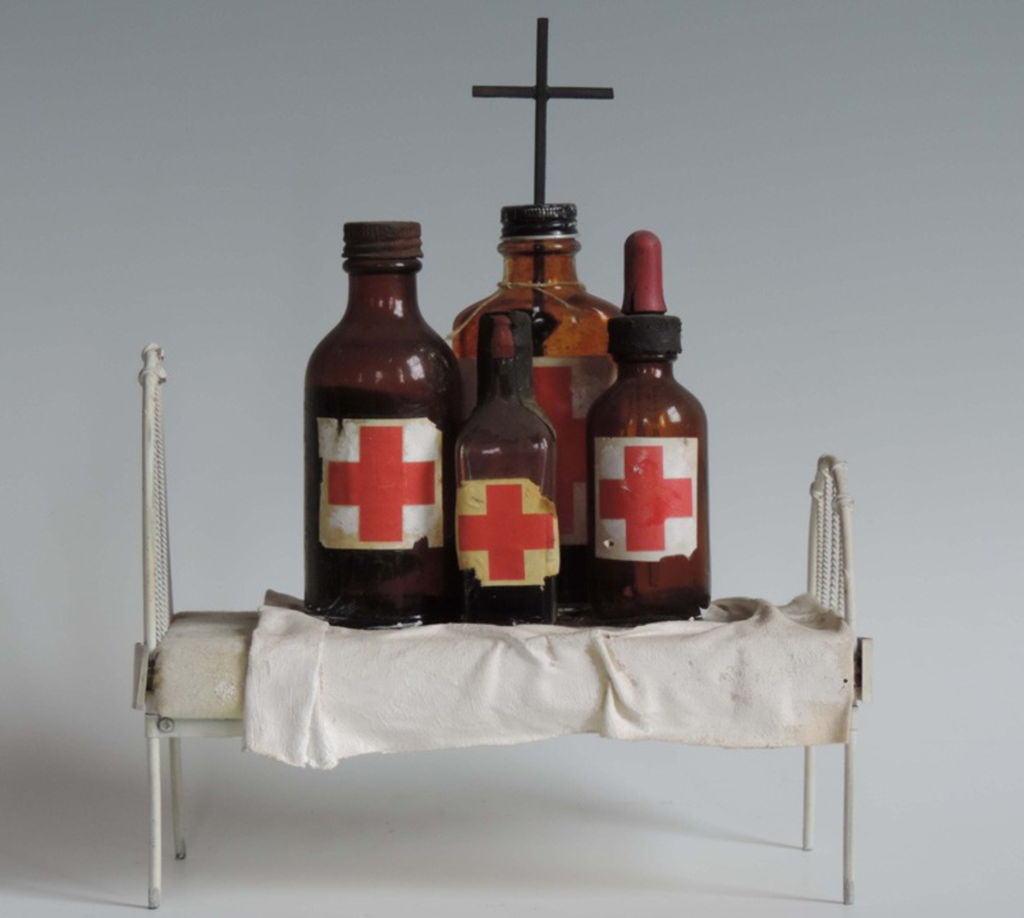 Amid the dozens of assemblages and paintings by Douglas Schwietert filling a fifth-floor studio in the Hobbs Building, one of the canvases leaning on the floor shows two women sitting under a tree, crying. Dressed in Victorian white dresses, with hairstyles to match, they cover their faces and weep into each other’s arms. A large, stately house is behind them across a field, and above, in arched lettering reminiscent of the gateway to an old cemetery, letters spell out “We Sell Memories.”

That plural pronoun’s ambiguity only makes the phrase — also the title of a new solo exhibition by Schwietert at the Leedy-Voulkos Art Center, from which the unfinished painting itself is absent — more evocative. For one thing, it’s a tongue-in-cheek commentary on how art is the physical remainder of experience. The experience of creation and the memories that fuel the artist’s inspiration become tangible records. These, in turn, are often offered up to the marketplace, sure, but their lasting value is measured not in dollars but in the power to inspire in the viewer new stories, to generate new energy.

And proxy inspiration and energy must hereafter suffice, for Schwietert — after attending We Sell Memories‘ First Friday opening July 3, amid admiration from a steady stream of fellow artists and friends — died July 8.

At Leedy-Voulkos are 36 works selected from Schwietert’s collection by one of his closest friends, artist Lori Raye Erickson. With the help of artist Christel Highland, a curator for MLB Designs, Erickson here shows us some of Schwietert’s best work from the past decade. This includes some of the assemblages for which he had become well-known, which incorporate reproductions of black-and-white photographs of people from around the mid-19th century to the early part of the 20th, layered with bits of text or titles that spark a narrative slant. The exhibition also demonstrates his range in several series of paintings.

In the latter category: “Interior,” a 2007 series of five depictions of various tables. Done in acrylic and enamel over charcoal outlines, they have a quiet presence. It’s a privilege to see four of them together on a single wall.

“Bed II,” from a 2009 series of four, is difficult to see without feeling foreboding or sadness. It’s a stark white object centered before us in two-point perspective against a shadowy background, and its occasional reappearances elsewhere in the show — including a couple of times in three dimensions — are equally jarring. In one case, it’s a platform for antique amber medicine bottles, under the title “Sickbed.” In another iteration, it’s perched on top of a metal trunk inscribed with the declaration “Charity has no blanket.”

Schwietert worked as a U.S. Army medic in Germany, an experience that would seem to inform his art, and he finished some of what’s on display here after a cancer in remission returned a couple of years ago. Yet the thread of autobiography in these works is purposely loose, if it’s visible at all. Rather than prompt your curiosity about the artist, the many satisfying details layered into each of the creations at Leedy-Voulkos fire your broader imagination. That’s the idea: In his statement for this show, Schwietert writes that his goal is accessibility. What we see here, he adds, “can mean anything anybody wants it to. There are no solutions.” When one of Schwietert’s fragments shows a girl photographed 100 years ago, posing with a then-quite-alien telephone, you see the potential for poetry in a tiny glimpse of someone else’s anonymous history.

The same invitations to the mind’s eye extend from “The Girl Across the Street,” from the man in a top hat and his “Trophy,” from a barefoot kid carrying a crate of tin cans on a “Factory Floor,” and from “Cornina” (a blindfolded doll’s head on a Corina cigar box that makes music). And you can file under “no solutions” the unmistakably straightforward image here of Earth’s last two men, facing off at gunpoint.

“My job is to … keep the work simply puzzling and open-ended,” Schwietert writes. He has accomplished just that with the play of images throughout these works, and by virtue of strong craftsmanship demonstrated in a wide field of materials: battered boards, dented metal, obscuring paint, antique news clippings, old tools, string, tacks, glass, wiring and other scraps.

“Nothing New Here” — one of two pieces that he completed this year — is a wittily self-reflexive jab at the very nature of making art. A Parthenon-like building looms as if in an overblown postcard, encircled by impossibly tiny cars and people. Above the scene, Schwietert tacked a slice of slatted boards and draped some rough brown cloth across it, with the title words in block letters carved in a white space between.

As in so much of the art here, you can look at “Nothing New Here” and see discrete parts, awaiting each viewer’s mental addition or arrangement. In each sum is a resonant echo. The original story may be lost, may never have existed in one definite narrative, but in that echo is Schwietert’s invitation to create endless new tales.