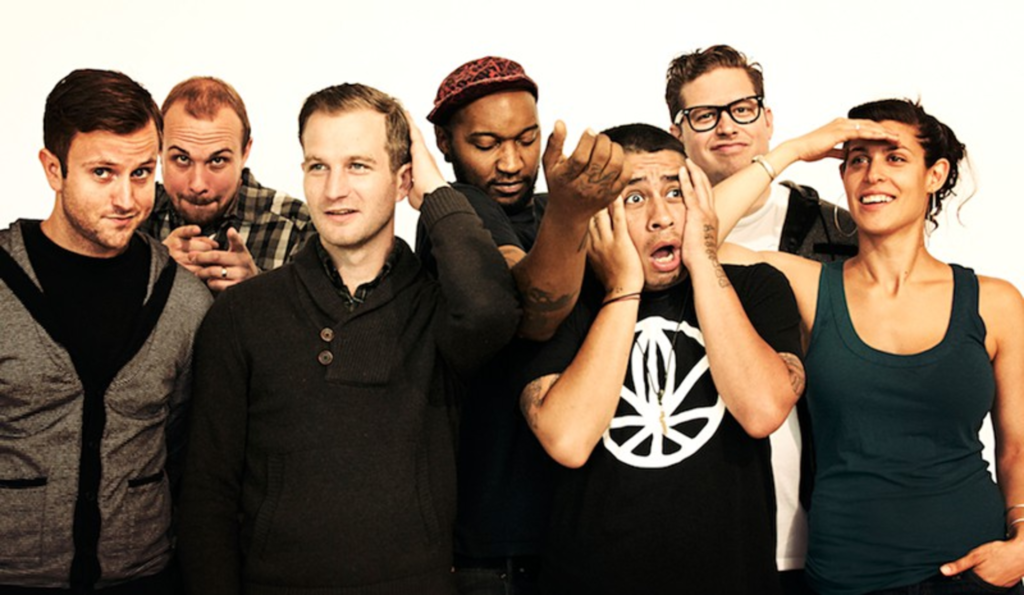 The fire and diversity that make hip-hop collectives compelling are also what can unravel them. Everybody’s got opinions — what hotel to book while on tour, where to go for coffee in the morning, how to execute a certain track. It’s challenging to harmoniously accommodate five or more personalities in any situation. And when those personalities are MCs — not types who are hesitant to speak their minds — it’s no wonder that these collectives often evolve into solo ventures (Wu-Tang Clan) or outright breakups (A Tribe Called Quest).

Members of Doomtree, a Minneapolis crew boasting five MCs and two producers, insist that preserving their relationship as a family is first and foremost. They admit to having differences but believe that no issue could be big enough to drive a permanent wedge among P.O.S., Sims, Dessa, Mike Mictlan, Lazerbeak, Paper Tiger, and Cecil Otter.

“We typically don’t clash,” P.O.S. says. “We’ve been brothers and sisters for 10 years now. We know how to deal with personalities, but we’re always family.”

“Working by committee definitely has its challenges,” says Dessa, the group’s only female member. “Big decisions are hard to make quickly because everyone’s opinion has to be solicited and discussed. That being said, we’ve had remarkably few fallouts. We genuinely like and trust one another, which is probably more than most businesses can say of their workforce.”

Particularly impressive is the way Doomtree members have branched out while maintaining a core focus on the collective. P.O.S. is signed to the Twin Cities label Rhymesayers Entertainment. Sims recently released his second full-length, Bad Time Zoo. Cecil Otter is signed to Sage Francis’ label, Strange Famous Records. And Dessa is a published author. Despite flourishing solo paths, all maintain that they work better together than apart.

“We go back like rocking chairs. We’re like two rear flats on a Cadillac,” Mictlan says. “When it comes to our music, we’re all adults. Creating is supposed to be fun.”

This year finds Doomtree’s roots firmly planted. Its latest effort, No Kings, is a well-balanced display of seven multifaceted artists bringing their individual sparks to the table as they merge their distinctive styles into one cohesive force. It’s much more eclectic and hard-hitting than 2007’s False Hopes or 2008’s self-titled release. The group went all Bon Iver on No Kings, withdrawing to a cabin in the woods in northern Wisconsin.

“We played beats on repeat — all the MCs pacing and mumbling as they wrote their verses,” Dessa says. “After several days, a lot of booze and dozens of sandwiches later, we left with the majority of the record demoed.”

“With this album, the producers [Paper Tiger and Lazerbeak] got together a couple times a week for a month or two and made beats together, collaborating on sounds, layout, sequence and all that stuff,” Sims says. “Writing the lyrics for the songs basically worked like this: We’d put a beat on loop, and people would start to sketch out ideas. When someone came up with either a concept, chorus or start to a verse, we’d decide as a group whether or not that was the direction that particular track should take.”

This diplomatic chemistry is evident in a live setting. A Doomtree show is sometimes like an adrenaline-packed blow to the head and sometimes like a quiet lullaby. The range of emotion is part of what makes the collective special.

“Onstage, Doomtree is a cross between a revival meeting and an intramural hockey game. There is love, anger, laughter, abandon, release and a fair share of body checking,” Dessa jokes. “We’ve known each other and made music together for most of our adult lives, and the depth of those connections is clear. We script very little. There are more polished rap shows to be found, but there’s nobody with a more authentic, impassioned live performance.”

“I’m a fan of everyone in Doomtree, so for me, it’s like being able to back up some of your favorite artists,” Sims says. “There’s a general excitement in that. There’s an anticipation for what [someone’s] going to do next. Feeding off the energy everyone is bringing is an absolute thrill.”

Energy may be required as Doomtree prepares to embark on an extensive U.S. tour, kicking off Thursday at the Granada, in support of No Kings.

“This is our 33rd release as a label,” Mictlan says. “I consider the past 10 years the beginning.”