Don’t Talk With Your Mouth Full 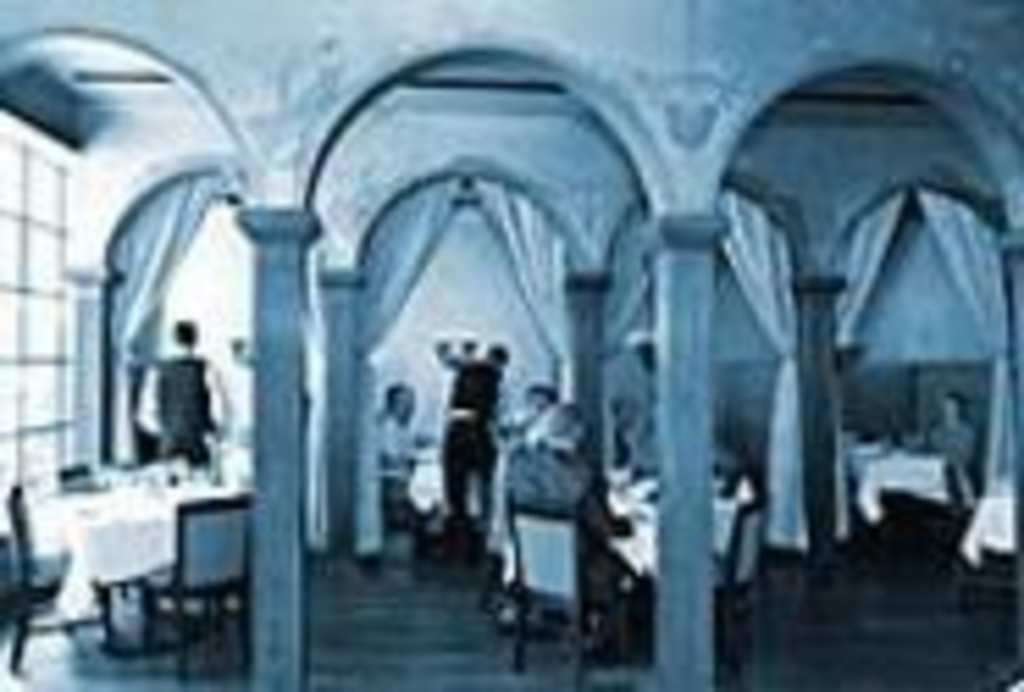 That’s good news for the subject of many recent restaurant conversations: Trattoria Luigi, the newest, glossiest, and most expensive Italian restaurant in the Plaza neighborhood. Since August, when the 28-year-old Luigi Bonura and his equally youthful partners opened the two-story restaurant (with a smoky, sexy lounge in what was once the basement), the Trattoria has lured the “in” crowd of all ages to its long bar and dining rooms. The hip twenty-somethings aren’t always staying for dinner, since the menu is on the pricey side, but that hasn’t stopped customers of all ages from talking. In or out of the restaurant. It’s been a long time since any local restaurant has garnered as many passionate opinions in such a short time.

One evening I was sitting in one of the restaurant’s smaller dining areas — a room with a spectacular nighttime view of the Plaza’s urban skyline — having a quiet supper with my friend Karen. A middle-age woman stepped over to the table, insisting we had met once before. Had we? She remained completely unmemorable.

“If you’re reviewing this place,” she said, wagging a manicured fingernail under my nose, “you better write that it costs too much money to eat here. I had angel hair pasta with fresh tomatoes and basil and it cost $12!”

Putting down my fork, I simply gave her the evil eye and she sauntered off (on a very expensive pair of high heels, I noted). But her stinginess amused me. Twelve dollars is hardly exorbitant for a freshly prepared pasta dish, especially at an upscale restaurant. You want cheap pasta? Go to the Olive Garden. And there’s a little Italian joint in the suburbs with vinyl tablecloths and paper napkins where a plate of very basic spaghetti and meatballs is only a few bucks less than Trattoria Luigi’s Pasta al Pomodoro Crudo. Isn’t an extra $4 or $5 worth it for fresh ingredients and a lot more glamour?

It is for me. Trattoria Luigi, which isn’t truly a trattoria in the classic sense (in Italy, a trattoria is essentially a neighborhood bistro offering inexpensive pasta dishes). Instead, it’s a stylish ristorante. “I called it a trattoria,” Bonura says, “because the name implies a sense of family tradition. And my parents still own their restaurant, the original Luigi’s restaurant, in south Kansas City.”

The restaurant’s lush interior — which combines the sex appeal of Fellini’s La Dolce Vita, the sophistication of a New York supper club, and, for good humor, a splash of Liberace-style flamboyance — was created by Las Vegas-based designer Mark Tracy (a college classmate of Bonura’s) and the restaurateur’s wife, Kasia. The heavy chairs are upholstered in a red velvety fabric, the banquettes in a faux cordovan, and the walls are painted in various shades of blood and sand.

“It has a very New York attitude,” sniffed my friend Ramona, as if New York were a synonym for horror. “I was with a group of five ladies and Doreen ordered a glass of Cakebread Sauvignon Blanc and it was $18! For a glass!”

It didn’t matter that Doreen is the wife of a Kansas millionaire. The price had her practically staggering on her $250 Ferragamo pumps. Yes, some of Trattoria Luigi’s wines cost as much as $29 a glass (the 1993 Brunello di Montelcino Altesino), but others cost less than $5; the extensive wine list has more than 100 offerings by the glass, most around $7.

Like any upscale restaurant, it’s all in the art of ordering. You can spend freely and passionately and enjoy a $300 dinner or you can have a pretty sensational romantic dinner for two, with vino, for less than a hundred bucks. Dinner for a trio will average about $120.

Sure, maybe not everyone will want to spend $14 on chef Eldon Painter’s appetizer of sautéed scallops — but they should. The mollusks come with a lacy wedge of Asiago cheese baked into a crisp tuile cracker, which rises like a sculpture over a sea of green pesto splashed with drops of yellow and red pepper vinaigrette. The dish arrives at the table looking like a Julian Schnabel painting — the artistic presentation alone is worth the price. And the taste! Plump, sweet scallops, hot and vaguely crispy, melted on my tongue. And after I’d finished the scallops, I scooped up the rest of the mind-boggling pesto with the restaurant’s warm, savory foccacia. And Karen and I shared Luigi’s house salad, a blend of fresh mixed greens, decadently oily kalamata olives, shaved Parigiano cheese, and crumbles of tart gorgonzola and splattered with a sweet, pungent balsamic vinaigrette.

On an earlier visit, I had selfishly devoured an entire 16-ounce ribeye steak — the Prime Costolo con Osso — dappled with fresh shiitake mushrooms and a luscious, intensely flavored Chianti reduction sauce all by myself. Then I’d reached across the table to finish up my companion’s osso bucco, that fork-tender braised veal shank lying seductively on a bed of basil-flavored risotto.

Wanting to experience different facets of the menu, Karen and I decided to choose one meat dish and a seafood offering and split them. Alas, when the dinner arrived, Karen took one taste of her seared pork tenderloin medallions, slowly cooked with tender figs and spicy currants in a tawny apple cider reduction sauce that smelled — and tasted — of autumn, and had an immediate change of heart. She offered me a tiny bite and kept the rest of the plate, along with the mound of garlic mashed potatoes, for herself.

Luckily for me, my dinner was equally glorious: a dish of creamy fettuccine Alfredo topped with a chorus line of fat grilled prawns (looking as big as baby lobster tails). In retaliation, I begrudgingly gave Karen a single prawn and not even a forkful of pasta. We hungrily gobbled up every bite, every drop of sauce, even the garnish.

Karen and I had made a truce to actually share dessert. We chose that peasant innovation known as bread pudding, which was served in an incarnation as sophisticated as you’ll ever see: a circle of warm, quivery custard and fluffy bread that was so light it all but floated off the plate.

The food here is sensuous and decorated with real Italian drama. Only at Trattoria Luigi can a mere dish of garlicky fettuccine carbonara be infused with as much passion and style as the aria playing on the sound system. The young servers are friendly and attentive, although their knowledge of some of the menu’s dishes can be limited (one female server wasn’t sure what pesto was, for example). All in all, the place has style and an attitude (I’m not sure it’s exactly a New York state of mind) that will delight some diners and turn others off. I think the place is terrific, but don’t take my word for it. Get a group of friends, go check it out, and talk amongst yourselves.