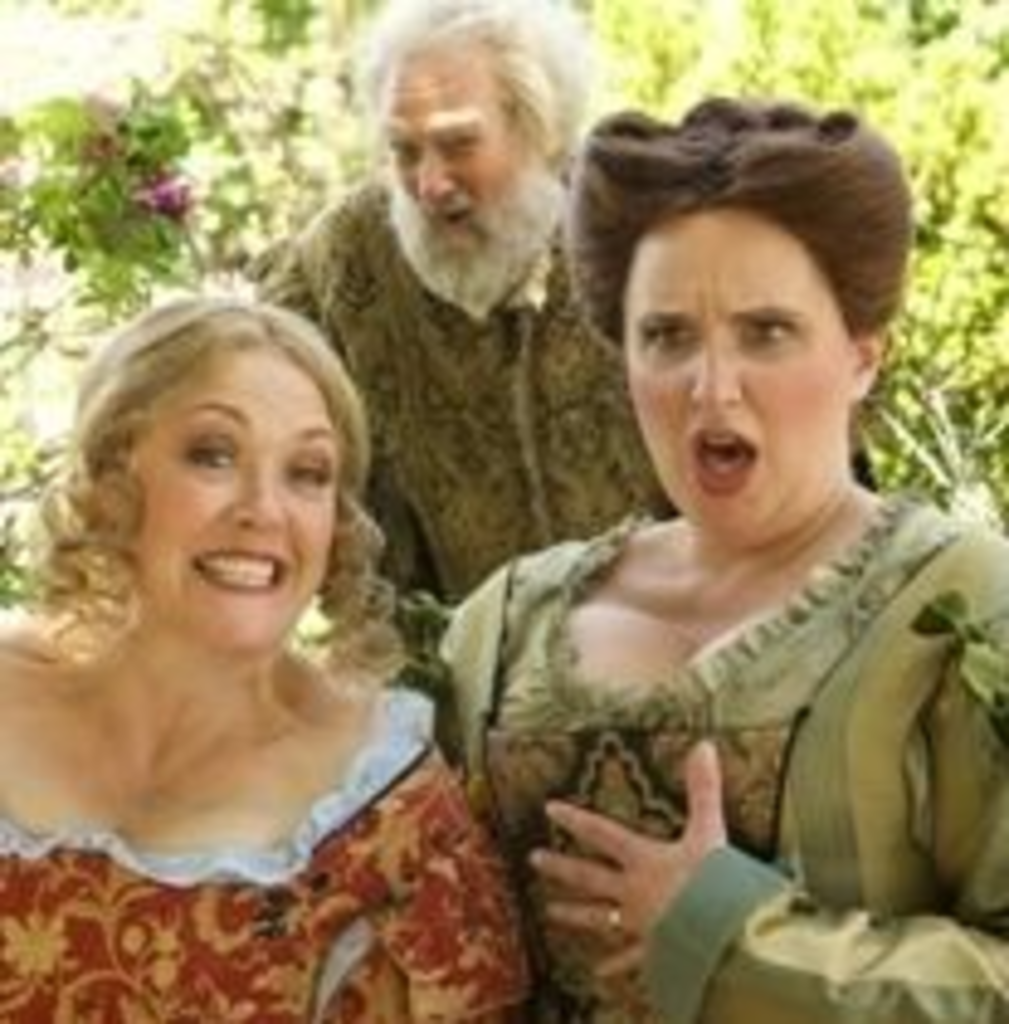 How clever, then, that this year’s festival organizers have mounted The Merry Wives of Windsor, the prosey affair, the mechanical construction — evidence that Shakespeare was mortal. Audiences can hit the park with confidence. If you zone out for a scene while watching kids chase fireflies, you won’t have missed any great poetry because there isn’t any great poetry. Hell, even if you miss one of Sir John Falstaff’s humiliations, no worries: There are two more, both cute, and the setups are pretty much the same.

The great Falstaff (played with grand shamelessness by Phil Fiorini) capers in a codpiece shaped like the nose of Groucho glasses. He has come to Windsor to woo and rob the local wives, but his match is met, immediately, by Mistresses Page and Ford, the targets of his scheming. This is one of the chief disappointments of the play itself: Not for one moment does it appear that the villain might prevail. Instead, the Falstaff of comedy is brought low, again and again, by trickery that the Falstaff of the history plays would scoff at and triumph over. The wives invite him to an assignation, for example, and he arrives, puffed up and amorous, only to be gulled into hiding from a husband in a laundry basket that will be chucked into the river.

Garrett’s principals are strong, especially Fiorini’s Falstaff, Bruce Roach as a parson, and Karen Errington as Mistress Page. These three handle their speeches as if the words were coming to them for the first time, and each gets the meaning across through inflection and pantomime that are often funny but rarely exaggerated. Other actors aim over the top and stay there. A couple of scenes that feature neither Fiorini nor Errington are noisy bores, but at least they’re rushed through.

A character who acts or lies poorly is one of Errington’s comic specialties, and she’s given much opportunity to chatter stiff fibs here, usually while Falstaff quails behind a curtain. Because Mistress Page lies so baldly, and because Falstaff is no dummy, these scenes — and the humiliations they build to — make little sense even as they please.

Why does Sir John, Shakespeare’s greatest creation, fall for these base, repetitive ruses? Fortunately, some dreary bits involving young lovers afforded me time to wrestle with this problem. Fiorini’s cheerful performance suggests Falstaff is somehow aware that he’s the villain in a comedy. He submits to the plotting, he knows he must suffer and he makes what fun he can from it. Falstaff is so much brighter than this play that he even diminishes his brilliance so that — unlike Shylock — he never glows more powerfully than the comedy around him. Instead, as Fiorini plays him, he’s content to come up with silly bits of business for us. He’ll bend over to fetch a dropped slip of paper but fail to reach over his belly; attempting to escape a jealous husband, he’ll give pole-climbing a go, inevitably thumping back to earth.

As always, the set (this year designed by James T. Lane Jr.) blends artfully with the trees and stone walls of Southmoreland Park. Costume designer Mary Traylor’s outlandish finery gets laughs all on its own: the upper halves of the fanciest ladies emerge from their wide, rectangular bustles like the top-tufting tissues from tissue boxes, while Roach’s purple-stockinged legs dangle amusingly from his bulbous black shift.

I left the show amused but worn-out. Two nights later, I jogged past the park right around dusk. I stopped and watched, for a moment, from the northern wall. Falstaff was hiding, Mistress Page was lying, and I was laughing. One moment became several. Falstaff again grabbed that pole and waged his sad battle against gravity, and damned if I didn’t stand there, enjoying it.