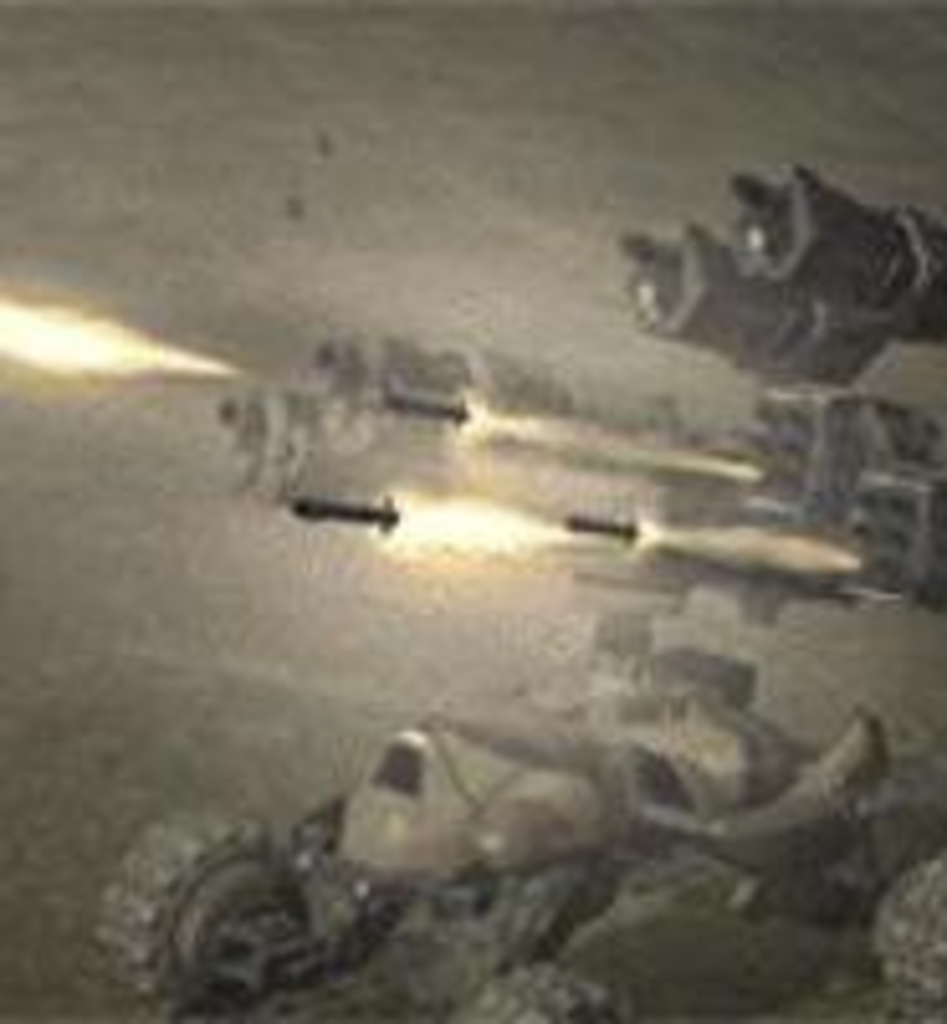 Like a real war, Chromehounds involves long stretches of tedium, occasionally broken up by a few moments of sheer terror.

After what feels like weeks of ponderous marching from point A to point B in your titular “Hound” — a walking tank — combat erupts. The fighting is fast and ferocious, and ends quickly. After the smoke clears, the march resumes.

Ultimately, whether you love or hate Chromehounds will boil down to how you feel about its pacing. Equal parts dull and frenetic, it’s a game that will disappoint some as much as it excites others.

Take Chromehounds’ single-player game: Aside from one or two new ideas, it’s boringly conventional. At best, it’s a dress rehearsal for the “real” game — the online modes. If you don’t have Xbox Live, don’t even bother buying this.

For those who can go online, Chromehounds is a unique and involving experience. After picking a side in a near-future war, you’ll join a squad of teammates. Thankfully, the game offers excellent filters to help you find players of your skill level. (Anything that helps us avoid Xbox Live’s infamous sea of 12-year-old gamers with Tourette’s deserves praise.)

With that, your tour of duty begins. Once you’re presented with a map of the war-torn world, it’s time to release the Hound. Every victory and loss will affect the course of the war. It’s riveting to know that your actions — whether it’s reclaiming a hayfield or sacking the enemy capital — have global consequences that will reverberate through other players’ games. If there’s one idea in Chromehounds that other developers of online games should shamelessly steal, this is it.

Aside from the spectacular combat, the most enjoyable part of Chromehounds is the garage, where you design your own Hound, down to the smallest lug nut. This usually involves carefully balancing speed, armor, and firepower. Too much weight, and you’ll be a sluggish sitting duck. Lighten it up, and you’re mostly harmless.

Online battlefields showcase the near-infinite variety of Hounds that can be built, from tiny, wheeled scouts to gargantuan, four-legged monstrosities. Players can even pimp their rides with custom paint jobs and decals, adorning the sides of their war machines with a smartly placed purple Yoda or, more commonly, crude drawings of male or female anatomy.

Despite Chromehounds’ depth and personality, it makes a few discouraging gaffes.

First is the speed. Combat-worthy Hounds have one gear: slow motion. It only gets worse if your Hound’s legs are damaged in a firefight: You’ll feel like it would be faster to get out and push the 100-ton mech.

Presumably, the designers made the Hounds sluggish to realistically depict how a building-sized machine would move. But in a game about giant robots, realism is pretty much out the window already, so they might as well have made it fun.

The other problem is that Chromehounds, an extremely complicated game, doesn’t even bother trying to explain itself to new players. Oh, you want to buy a machine gun? You must mean an RFZ-WMG-1! See a radiator on the shelf, and wonder what it does? The game tersely explains: “Offers good cooling performance.” Well, duh, but why is that good? You’re left to figure it out for yourself.

Clearly, Chromehounds was designed with a very specific player in mind: a meticulous tweaker, with plenty of time to spend online. For him, Chromehounds will offer months — if not years — of enjoyment.

But for the rest of us, this is the rare case of a very good game that you probably shouldn’t bother playing.