Does lighting one up make you a better parent? 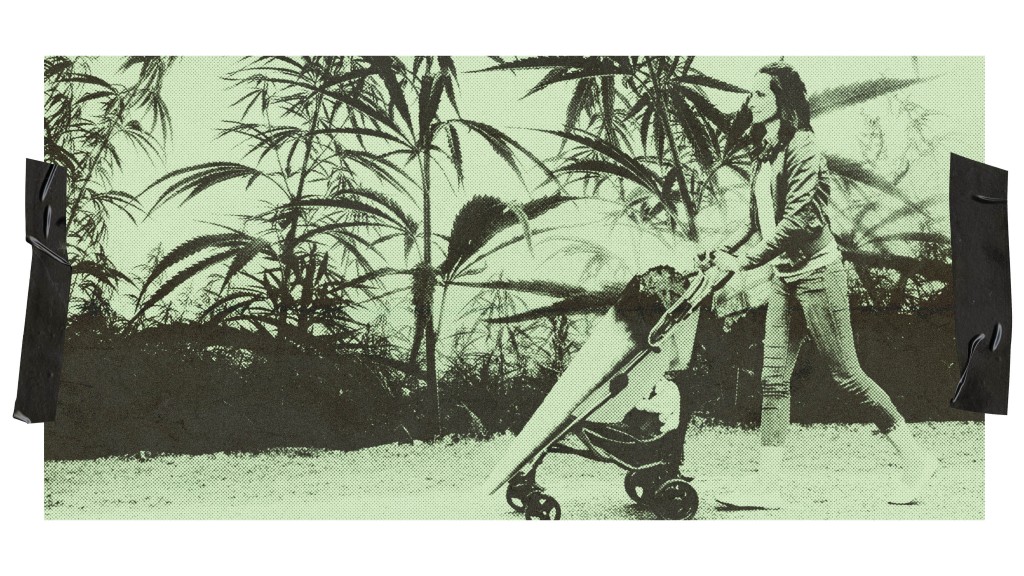 Names have been changed in this story to protect the identity of parents and their children.

A job you’d rather not have if given the choice, bills upon bills upon bills, cultivating and balancing relationships, children in constant need of care or they will literally die: all things many American parents can relate to. Life can be hard and stressful. But it can also be happy and laid back. It’s all about perspective. And perspective can change. Maybe exercise. Have a glass of wine with dinner. Meditate. Or light up a Doobie.

According to a 2019 Pew Research Center survey, two-thirds of Americans are in favor of legalizing recreational marijuana. That’s a huge jump from the 63 percent of people who were against legalization in 2000. Oh, how times have changed. But what if you add parenting to the picture?

Parents who use cannabis have varying reasons: stress relief, for chronic pain, others to quiet anxiety. Our country doesn’t make it easy to be an attentive parent. To many parents, missing a paycheck or having a small financial emergency is a threat that lingers over them every day. According to a 2018 Federal Reserve Board report, four-in-ten Americans can’t cover a $400 emergency expense. There are many stressors with making sure their children have a roof over their heads (46.8 percent of KCMO renters use 30 percent or more of their income on rent), food in their mouths (According to Harvesters, one-in-eight people are food insecure), and affordable healthcare to keep them alive (21 percent of people in KC don’t have health insurance at all). With all of that taken into account, many parents’ focus is on keeping up with logistics and not on engaging directly with their kid’s super important weird questions. There’s no time to tell little Timmy if God is real, the mortgage payment is due tomorrow!

Parents who smoke find it eases anxieties and allows them to be what their kids need them to be: a present and engaging parent.

Kenny Kush, 49, has been puffin’ pot since he was 16. He now has two children, 14 and 18, and he finds smoking helps him chill out as a parent. “It definitely has made me more chill, less worried about the little things,” Kush says.

In a 2014 poll, The Guardian asked parents about their marijuana use. An anonymous responder said, “Yes I smoke weed. Yes I have two awesome sons that are eight and four. I smoke around them occasionally, most of the time I go outside or in another room. I feel that smoking pot makes me a better person in general, not just a better parent.”

Another anonymous parent compares smoking to having a beer at the end of the day: “My husband will usually crack open a couple beers, but I prefer marijuana to help me unwind. Marijuana, as I have used it, has helped me to deal with my anxiety, and it has also helped shape my overall outlook on life.”

Some of the parents reported using the drug to help them be more in tune with their kids. They were more engaged in playtime and responded with more enthusiasm when their kids came to them with their myriad of questions.

Dan, a father in the UK says, “Being high around my kids is wonderful. I have two kids, one is four-years-old, and another who is 9 months old. I can be a ‘tough’ parent with the eldest if he doesn’t listen to me. I get frustrated with him over small things. But when I’m stoned, I tend to let small things slide, and punish the important stuff, a more tactical parent.”

Samantha Spliff, 25, is a child of pot-smoking parents. She found smoking does make better parents in her upbringing.

“I think it can help with times that are more stressful for a parent and allow them to be more present in the moment as opposed to being stressed or distracted,” Spliff says. 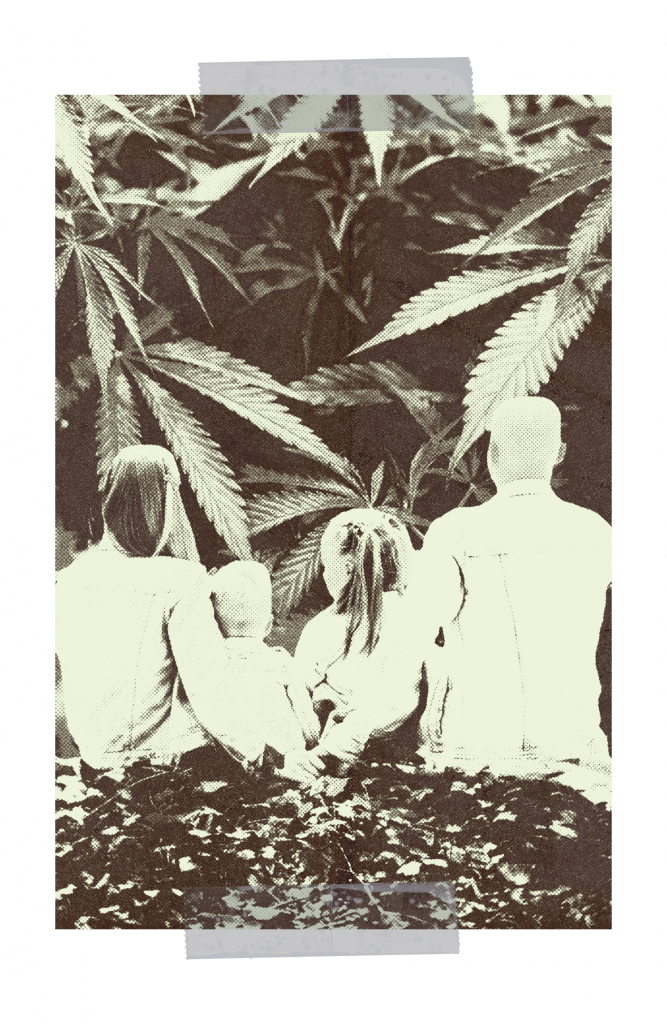 But ultimately, weed is a drug, so keeping it away from kids is crucial. Inevitably, there will be questions.

Patty PuffsALot, 25, has a two-year-old daughter. She smokes, but does smoking help her become a better parent?

“Not really,” says PuffsALot. “I don’t keep it in the house, and I don’t do it around her. If she ever asks, I’ll be honest though.”

Sasha Simon, a speaker with the Drug Policy Alliance, works to educate people on the facts of drug usage. When creating a curriculum for high school students, she came at it with a very familiar approach.

“The idea is to model it after sex ed,” Simon says. “We know abstinence doesn’t stop sex, and [the same goes with drugs]. The majority try it before high school, and the goal is to make sure they have realistic information and skills.”

Much like abstinence-only education, programs like D.A.R.E. in U.S. schools are harmful to students, according to Simon.

“The current curriculum has not changed in 20 years. It’s bonkers,” Simon says. “And it’s dangerous what they teach now—that cannabis is the same as heroin.”

PuffsALot plans on being honest, but for the time being, she’s gonna keep what she calls her “Mommy Time” separate from her daughter.

“I don’t smoke around my kid because I always manage to get too high. And only one of us should be pissing our pants at a time,” PuffsALot says.

It needs to be said that although more parents are embracing marijuana and there is a growing Marijuana Mommy culture (similar to Wine Mom culture), the same light-hearted “Mommy needs her medicine” attitude is not afforded to parents of color. According to the ACLU, Black people and white people use marijuana at the same rates, but Black people are nearly four times more likely to be arrested for possession. So while the shift in opinion on marijuana use is notable, America is still going strong in its inability to bring equality for non-white citizens.

Toking isn’t just a balm for parents of young kids. Parents with adult children also use Giggle Grass to connect with their kids. Some adults report having a better quality relationship with their parents after passing a joint around the living room.

“I think my relationship with my mother improved after we started smoking together. We were able to be more easy-going and laid back, and find humor in things and express ourselves and our feelings more easily, ” Spliff says.

According to a Yahoo News/Marist poll, 47 percent of marijuana-using Americans have smoked in front of their adult children, shared weed with them, or done both. Spliff’s mother is part of this percentage, and as far as their relationship goes, she absolutely thinks taking fat rips with her mother has helped them find common ground.

“I still argue with my mom and have differing opinions and an overall tense relationship with her, but it has allowed for more moments where we can connect and communicate easier,” Spliff says.

There’s no time better than now to talk to children about Mary Jane becoming legal in the US. How will weed be included or excluded from family life? Kenny Kush already plans on taking his 16-year-old kid to a legal state when he turns 18 to “vape up.”

The times are a-changing. Soon marijuana will become a part of mainstream American family life. According to a weed delivery startup in California, Eaze, one in five of their 10,000 survey participants are parents. Parents are embracing the role marijuana has in their lives. But there are just as many parents who will beat it back with a lead pipe until they can’t swing anymore.

At the end of the day, we all use things to cope. Marijuana could be a huge help or a huge detriment. It’s all about how you look at it. Whether it’s through a wine glass, on top of a yoga mat, or in the belly of a bong, it’s all about perspective.