Does Krokstrom Klubb & Market have enough Scandinavian mettle for its part of midtown?

You can’t swing a Norwegian forest cat in the Midwest without running into someone claiming Scandinavian heritage. People slide their lineage into introductions, often accompanied by the flash of an old family portrait that appears to have been taken by Werner Herzog at a child’s funeral.

I know this because I’ve done it. In lieu of a security system, I show home invaders a terrifying picture of my Norwegian great-great-great-great-great-grandmother, who, according to family lore, cracked a bear on the snout with her ski pole. She looks like the sort of woman who could credibly accomplish the job: bejowled, bescowled, beneckerchiefed.

So I wasn’t surprised to find a similarly somber portrait of chef Katee McLean’s great-great-grandparents hanging on a wall inside Krokstrom Klubb & Market, the Scandinavian restaurant that McLean opened with her partner, Josh Rogers, earlier this year. What, I wonder, would her grandparents, or mine, say about the space, done up in a sometimes-perplexing mix of clean-lined Swedish modern (matte-black drop-ceiling tiles, red-vinyl booths, a white-subway-tiled bar) and cozy Norwegian ski lodge (fat floral patterns, dark wood tables coated in butcher paper, reclaimed-log centerpieces)?

And, to be blunt, I wasn’t shocked to find the dining room mostly empty. The 3601 Broadway building, near the Uptown Theater, is cavernous, with an angled entrance and an airy dining room that past tenants — most recently, Broadway Kansas City jazz club, which closed late last year — have for years had difficulty filling. Can Krokstrom break the spell on a space where the tenures have lately run shorter than those of a Defense Against the Dark Arts professor?

The refined food and the strong bar program are cause for optimism.

Krokstrom recently added a happy hour, and it’s a fine place for a pre-dinner drink. The restaurant has a long and creative craft-beer list as well as a slate of specialty cocktails built around aquavit, a clear Scandinavian spirit akin to a caraway-spiced gin. It’s not ideal for every kind of drink — the Trident, for instance, is basically an aquavit negroni, and it buries the base spirit’s character. But the Swedish 22, Krokstrom’s riff on the French 75, improves on its model. The aquavit’s warming spices cut through the cloying sweetness of the champagne and the sugar. I’ll gladly throw this classic to the Swedes.

Curious drinkers can also sample aquavit straight by the flight — three generous servings for $15, or six for $30 — served in wee tulip glasses. I sampled one of the house-made aquavits — Krokstrom uses Svedka vodka as its base — as well as two imported offerings: the Linie, from Oslo, Norway, and the Aquavit Private Reserve, from Chicago’s North Shore Distillery. The Linie was the smoothest and most sippable of the three. Still, I cast my vote for the Private Reserve, a woodsy liquor front-loaded with cumin and cardamom. “I wouldn’t plan a party around it,” my husband said with a grimace as he took a sip. “But you can’t deny it’s distinctive.”

I would absolutely plan a party around the food. Despite — or perhaps because of — my bear-swatting heritage, I’ve long harbored a perception of Scandinavians as being slightly bleak and solitary, with dining traditions to match. My suspicions appeared confirmed when one of my dining companions, a slight Dane named Kara, began teaching us phrases from her introductory Danish lessons while we waited for our appetizers. (“The victim was a small child,” she chimed sweetly. “The horse is eating the man.”)

But as I sampled Krokstrom’s dishes — designed for tapas-style sharing — I began to wonder if maybe my friends were just weirdos. The menu has a robust selection of small plates (called “share plates”) as well as a few larger, meat-based entrees (called, confusingly, “small plates”). And despite my preconceptions about standoffish Swedes, the hospitality at Krokstrom is disarmingly real. Our server was fast, attentive and eager to explain the cuisine’s rules of the road.

She advised that we start with the Smörgåsbord, a greatest-hits compilation of Scandinavian snacks. The ’bord in question proved similar to most hipster-issue charcuterie plates, dressed with small clumps of ham, cubed cheddar and housemade pickles — with two notable exceptions. The pickled herring was firm, with a well-balanced sweetness, and I longed for a more generous portion of the platter’s star: a creamy-textured whey cheese with rich caramel undertones and a subtle whiff of smoke.

The small plates were mostly hits, though a few should have more boldly embraced their roots. The apple-Dijon mussels came soaked in a rich and boozy cooking liquid, with a tangy finish from the Dijon cream, but the fennel and apple were overpowered by the heavy broth. The result was undeniably tasty, but I’m not sure I’d be able to pick these mussels out of a lineup. 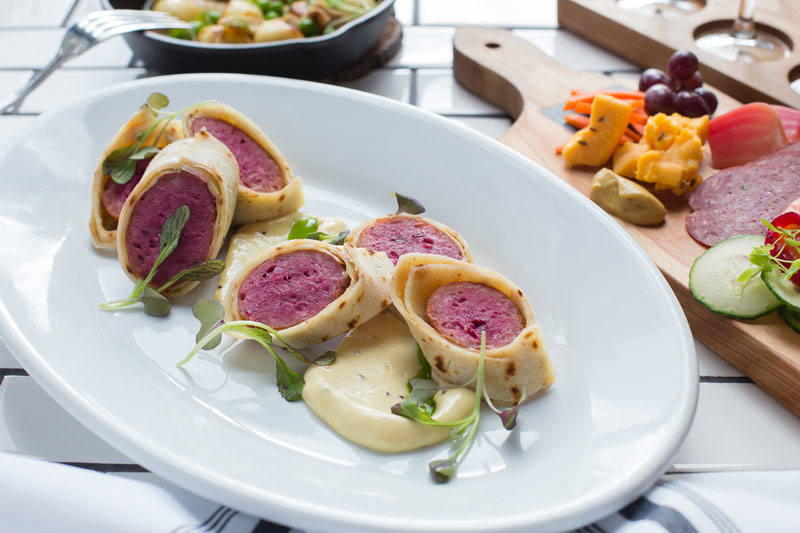 More distinctive — and harder to share — was the lefse and sausage, a smoked-beet sausage (from Broadway Butcher Shop) swaddled in soft flatbread, cleaved into bite-sized hunks and plated atop a creamy mustard sauce. The sausage was well-seasoned and perfectly cooked, with a crisp brown crust and a vivid red interior. The smoked-trout potato cakes were also well-executed. And vegetarians have a worthy alternative in the mushroom strudel, which comes nestled in a mellow aquavit-cream-and-glögg (a Swedish mulled wine) reduction. 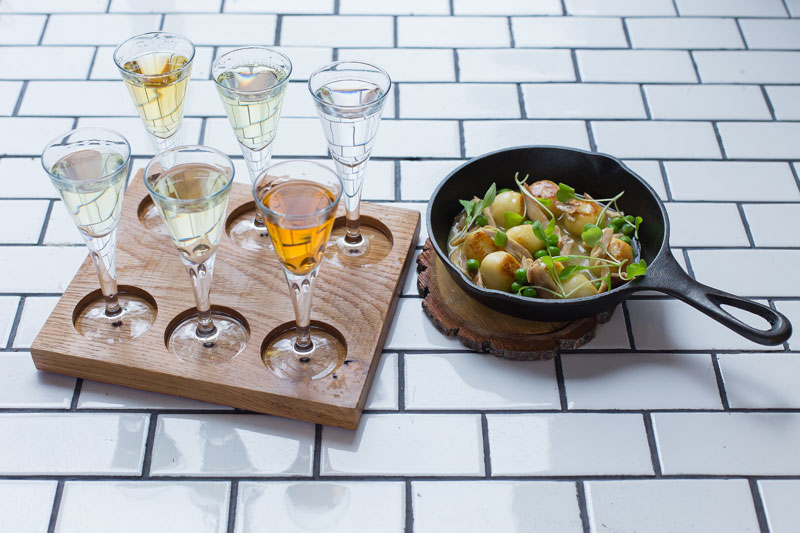 But I’d punch a bear for another taste of the Klubb dumpling, which combines generous chunks of chicken confit with potato dumplings and peas in a juniper-and-orange pork jus. The potato dumplings themselves were a disappointment: Too delicate to withstand the pork bath, they dissolved into mush instead of retaining their chew. But reader, with every confused fiber of my pork-swollen heart, I beseech you to order them anyway. The confit’ed chicken was flavorful and divinely tender, and the savory broth captured the complex floral notes of the orange without succumbing to sweetness. I used half of an empty mussel shell to scrape out every last drop. That the dish wasn’t served with a spoon, or as a soup, seems an oversight.

As I lapped meat juice from the husk of a dead mollusk and surveyed my choice with cool detachment, I couldn’t help but think of the last king of the Shang dynasty, a decadent man who filled his palace pool with wine so he could float around in a whore-paddled canoe, drinking lustily and plucking skewers of roasted meat from faux tree branches. In my fantasy, the skewers are chunks of Krokstrom’s chicken confit, and the pool is filled with pork jus instead of booze. I could take or leave the whores.

Not every plate inspired such raptures. Krokstrom doesn’t seem to know what to do with its crayfish dip, which first appeared  as a hot dish on the menu. By the next time I visited, though, it had morphed into something that arrived at refrigerator temperature and elided the taste of both sherry and crayfish in a wash of lemon and cream cheese. The effect was more mayo-driven Midwestern picnic salad than subtle Scandinavian.

Tellingly, the dairy-heavy dip was still one of the lightest-tasting dishes I sampled. The restaurant offers a small selection of midpriced smørrebrød — cold, open-faced sandwiches — but these feel somewhat desultory by comparison. The prawns on the “Toast Skagen” were tough and bland, and a few dots of mayonnaise did little to enliven the dish. The menu alludes to dill; the dill was feeling shy that day.

What Krokstrom excels at is coziness. I can’t think of another local place serving the hearty fare you might pine for after, say, an icy commute via cross-country skis. But there’s the rub: As the weather warms and we all start eating like Gwyneth Paltrow again, Krokstrom’s finest dishes may wane in popularity.

Don’t let them. Wear your winter paunches with pride. My fitspiration pics are all dour portraits of eight-foot-tall Scandinavian women like my (5xgreat) grandmother. While others cultivate their summer bikini bodies, I’ll be at Krokstrom, cultivating mass.

Someone’s got to protect the city from bears.