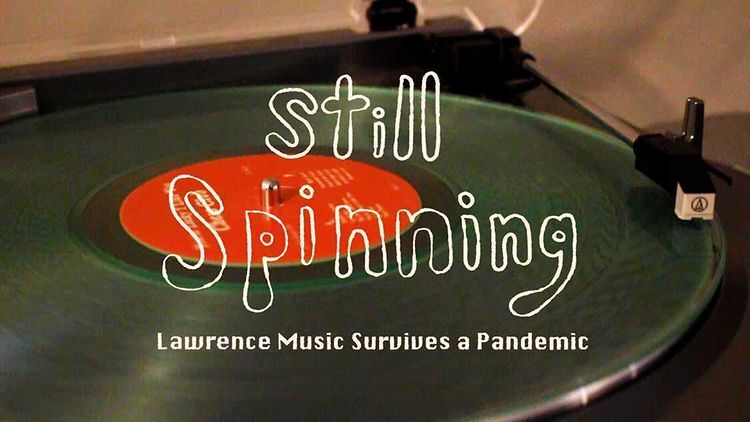 One of the many things that I love about Lawrence is the tight-knit community of music lovers. The local bands, the venues, the house shows, all of it. In my opinion, every college student should experience a local band play at least once, and Lawrence has plenty of opportunities to do so. But with the virus that seemed to have stopped time in 2020, artists have had to change their way of doing things, and Still Spinning documents just that.

Still Spinning is a documentary created and directed by two recent KU grads Nicole Dolan and Cami Koons. It follows Lawrence bands Chess Club and Pale Tongue and documents how they continued on making music and connecting with others despite the whole world being shut down.

Before the pandemic, it was common for Lawrencian bands to perform at White Schoolhouse, a well-known local concert venue, and house shows. Local musicians often had opportunities to open for larger artists nearby as well, including for Remo Drive, which local emo band Counterculture opened for, and Black Belt Eagle Scout, which solo musician Bad Alaskan opened for. According to co-directors Dolan and Koons, Chess Club had even planned a two-week tour on the East coast that had to be shut down because of the pandemic.

Not only have musicians been required to change the way they share their music, but artists everywhere have been inspired to change what they’ve been creating as well. Carlos Calderon from Pale Tongue has taken a step back from the band and has been working on more solo projects this past year. What started as the psychedelic garage rock that Pale Tongue excels in has morphed into psychedelic-inspired hip-hop.

Overall, the community has been supportive of artists throughout the pandemic. LAAND inc. (Lawrence All-Ages Noise Destination), a cooperatively-run arts organization, offers live online music sessions with local bands. Pre-pandemic support of the local music scene from local businesses created a unique connection between venues and the community—in terms of working to save those institutions that they cared for.

“Even the Granada putting ‘promote local businesses’ on their marquee… The whole community really just gathers around music I think and values it as an important aspect of Lawrence culture,” Koons says.

Dolan hopes that people who aren’t familiar with the music scene learn through Still Spinning to appreciate local music. Creatives like musicians, artists, writers, and even journalists have been using this pandemic to their advantage by reworking how they produce content.

“It’s the perfect way to end our journalism career at KU. I can’t think of a better way to end this chapter with this beautiful passion project that will eventually probably—and hopefully—lead to more collaborative music-oriented, local Lawrence-oriented things.”

What else are Chess Club and Pale Tongue up to now? Well, that’s for the documentary to tell you. Still Spinning will be entered in the Free State Festival and can also be viewed on YouTube. Check out Still Spinning here.