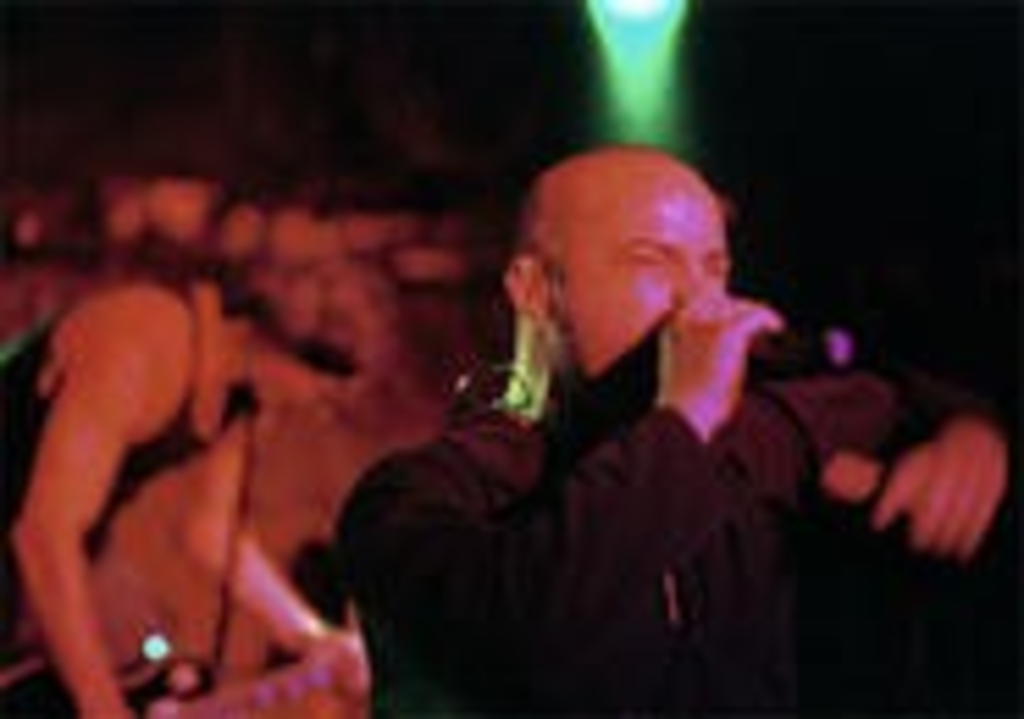 As an “indie rocker” (not my choice of defining myself, but probably the easiest pigeonhole category), I lead a fairly sheltered life when it comes to shows. So a metal show comes up — and who gets to review it? The kid who has heard little metal from the post-1990 camp. Regardless of my preferences, I am a bit fascinated and intrigued by the current state of the metal union. While Korn and Limp Bizkit soak up the spotlight and influence way too many kids along the way, such bands as Slipknot go platinum without MTV airplay, thanks to word of mouth generated by a tremendous live show. If nothing else, that says something about the spirit of the movement and the strength and solidarity of today’s metal scene.

Monday night’s boys club meeting at The Bottleneck showcased all that is great and all that is horribly wrong with said scene. Whether the cons outweigh the pros is completely up to each listener. The unruly mob that had gathered seemed to unanimously weigh in on the positive side of the scale, showing nothing but love for every band that hit the stage yelling, “Fuck shit up!” between every song. The crowd was eating up every band’s shtick up with a spoon. However, even the fans’ excitement couldn’t compensate for each band’s shortcomings.

To many people, all wine tastes alike. It takes someone with a truly distinguished palate to recognize the unique flavor nuances of grapes from various vineyards. Likewise, to people lacking an ear for headbanging fodder, these bands were indistinguishable from their popular peers on MTV. Regardless, if it’s played loud with yelled vocals, some sort of melody, and a complete low-ended muck of guitar sound thrown together over occasional stop/start segues, kids will dig it, fists will fly with the sign of the beast extended, and mosh pits will rage out of control.

Early openers Apartment 26, which was recently in Lawrence to open for the Rollins Band, did nothing to carve out a niche for itself in the nü-metal world. Instead, the group plodded through a set that excited the crowd while doing nothing to establish the band’s personality.

The Workhorse Movement was up next, and the sound blaring through the speakers of The Bottleneck was strikingly similar to what emerged during the opening act’s set. This group mixed muddy downtuned guitars, tough-guy vocals, and some very competent drums into a blend that could be labeled “strip-mall metal.” It was the favored sound among last year’s Ozzfest travelers, and it’s not surprising that all of the bands on this bill will be living in Ozz this summer.

The Deadlights were just serious enough to actually rock, and just hokey enough to make one say, “I just listened to that and liked it?” Lead singer Duke’s vocals were processed more than Velveeta by the same overzealous soundman who decided the only important part of the drum kit was the kick drum (emphasized by some outrageous double-kick action). Sporting an odd Trent Reznor meets beach-bodybuilder ensemble, Duke couldn’t figure out his style, let alone settle on a suitable vocal range or delivery. Instead, he shifted from a convincingly evil hissing grunt to Dave Mustaine-style nasal explorations to spoken bits. In frustratingly brief spurts, the Deadlights proved themselves to be the night’s most talented outfit, injecting some sense of harmony into the four-string-riffage formula that is at once the selling point and the downfall of this type of band. However, even during their duller moments, the Deadlights continued to perform with manic energy, presenting a no-holds-barred set to the cozy crowd.

After stretching out beside the stage, Disturbed took the stage with taped background music flowing. The lead singer was carted onto the stage in a Hannibal Lecter-esque straitjacket and mask, but the flaccid theatrics were weakly executed and forgotten immediately. The band’s musical impression was a little more permanent. Featuring some more diverse electronic arrangements and much more interesting guitar work than the previous bands, Disturbed hopped around the stage a little bit sleepily, with the lead singer screaming convincingly but showing little physical effort to produce such screams (making one wonder how much the backing audio was helping out the band, vocally and/or guitarwise). The band’s cover of “Shout” by Tears for Fears was a real treat. Yes, it is hard to imagine it as a metal cover. No, I don’t know whether it was actually good or not.

Perhaps one of the most disturbing sights The Bottleneck has seen in a while was a fan slamming headfirst into a table while Disturbed ripped into a song. The fan stayed down for a good couple of minutes, then stood up with the back of his head covered in blood. Meanwhile, the band, oblivious to the injury, plugged away on stage. Aside from that incident, and some discouraging remarks toward a small crowd, the band showed off a diverse set of metal that, I guess, could be considered original — considering that metal today is original if you rip off many sounds instead of just one. So if that’s the qualification, give Disturbed the night’s top prize.