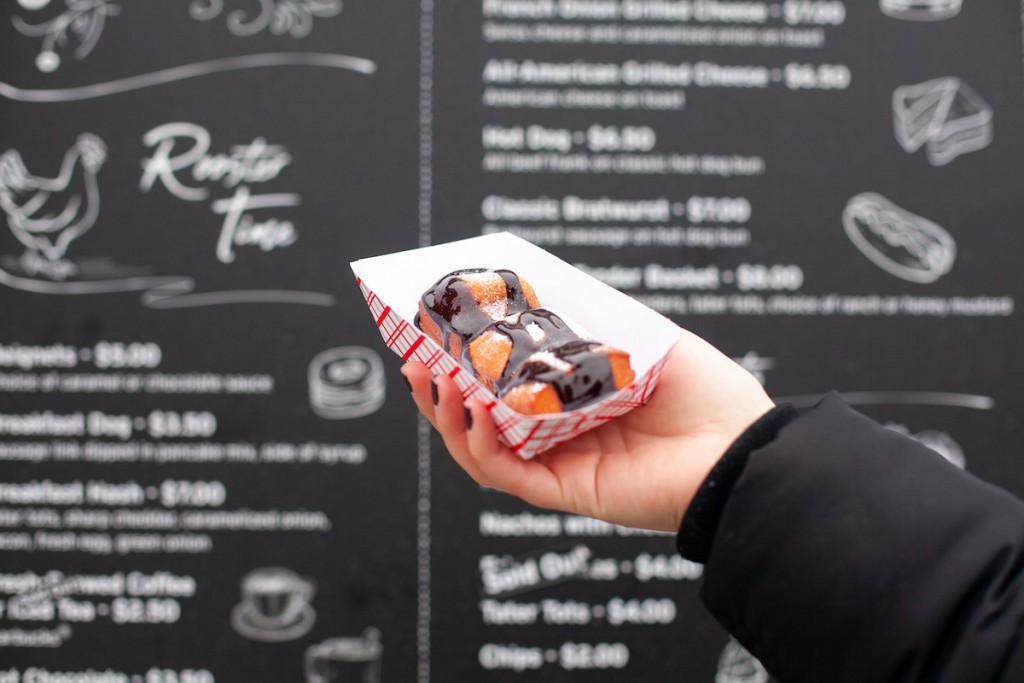 If you’re looking for a new place to enjoy the outdoors, get some exercise in, and subsequently enjoy a comfort meal afterward as a reward, look no further than Miss Ruby’s in Meadowbrook Park (4901 Meadowbrook Parkway, Prarie Village).

The food truck is a sister operation to Verbena, an upscale eatery inspired by east coast flavor, and The Market at Meadowbrook, a fast-casual café serving coffee, breakfast, lunch, dinner, and grab-and-go options.

The chef behind the order window is Terry Kopp, who has hands in the barbeque and burger world (don’t worry, there’s a burger and a sloppy joe available as well). He takes a simple approach to upscale trailer cooking: junk food, but with high-quality ingredients.

Dishes can be enjoyed on the outdoor patio next to the trailer, or on an extra cold day, in your car Sonic-style.

If you’re an all-day breakfast type of person, plenty of options are available for you as well. They have a breakfast hash with tots, sharp cheddar, caramelized onion, bacon, egg, and green onions, and also offer a few sweet treats. I would highly recommend the beignets, which are like fluffy, citrusy pillows, and can be topped with chocolate or caramel sauce. If you like chocolate and orange together (this combination is good and deserves more appreciation), then definitely go for the chocolate sauce.

Being the avid corn dog lover that I am, I also went with the “breakfast dog,” which is a sausage link dipped in pancake mix. If it’s a corn dog, I am slathering it in an ungodly amount of mustard (the only way to eat them), but this morning edition comes with a side of syrup, a more appropriate and equally delicious dipping option. 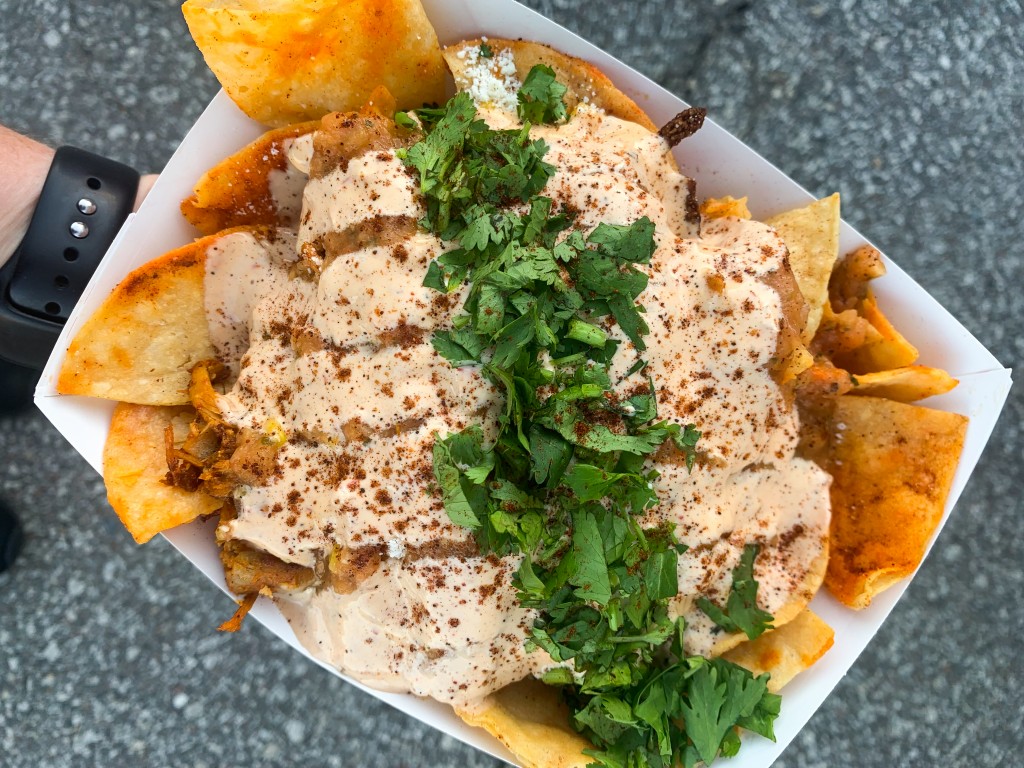 Taco Tank (1707 Locust St), a once-beloved “oversized taco cart” that now resides inside of Parlor, is there to satisfy all your taco, nacho, and other Mexican food cravings.

Run by chefs Roman Raya and Madeline Buechter, the duo brings years of culinary experience together to create simple yet flavorful authentic dishes. Raya built his cart to originally sell tortas. But given the space constraints, he decided to switch to a flatter carbohydrate by going with tacos.

The idea took off, and the operation traveled to local breweries to sell their bounty. Long lines followed wherever they went. Frequent stops included Pathlight Brewing and Rock Creek Brewing before moving into their permanent location. Now they make everything but the tortillas from scratch on the second floor of the beloved Crossroads food hall.

On the menu patrons will find several tacos and beyond. Tacos include carnitas, carne asada, vegetarian fajita bellas, and adobo chicken, all with traditional meat preparation. They are paired with cilantro–sidebar, I feel so bad for the people who have the cilantro soap gene–and other simple accompaniments such as pico de gallo, salsa, and some sort of cheese. If you go for the adobo chicken, that tortilla has a cheese-crusted interior, which provides a flavorful crunch. Who invented that idea? They deserve an award. They also whip up a mean birria taco on Tuesdays, so mark your calendars if you’re on the hunt for that sort of deliciousness.

The nachos also are a standout on the menu. The chips are house-made and are right in the sweet spot of delicate and sturdy. They’re then piled with your choice of meat or veggies, street corn, and their signature chipotle-mayo “tank sauce,” as well as salsa and cilantro.

The team also runs weekly specials, usually on Sundays, that stay true to the brand of Mexican flavor. Watch their Instagram, where their weekly experiments are revealed. 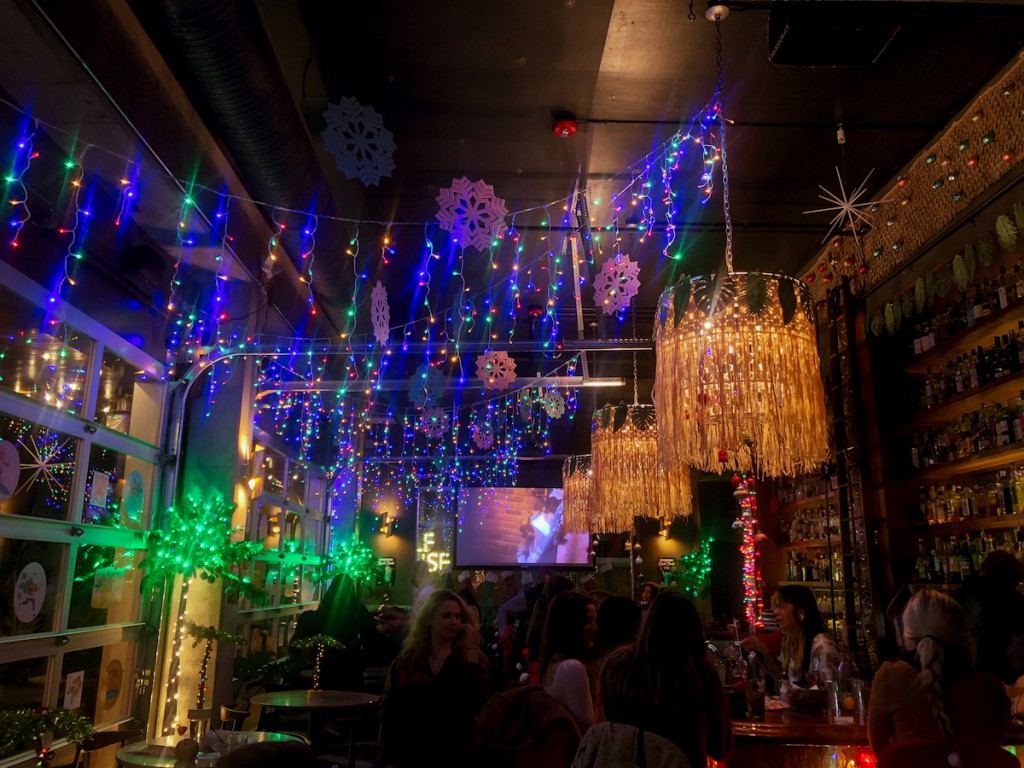 If you missed out on making reservations at one of the many holiday pop-up bars around town, there’s still time to get in on some last-minute boozy cheer at Julep in Westport (4141 Pennsylvania Ave #104).

The bar’s tropical holiday theme “Sippin’ Santa” will have its lights on and drinks flowing up until New Year’s Eve. The barstools, carefully draped with giant Santa hats, are saved for walk-ins, and there are plenty of drinks and snacks to indulge in.

Some of the seasonal island-esque cocktails including the Kris Kringle Colada with dark rum, amaro, allspice liqueur, lime, pineapple, and cream of coconut. Or check out the Sippin’ Santa also made with rum, amaro, lemon, orange, and gingerbread mix.

I opted for the White Russian Christmas made with vodka, condensed milk, and dark-roast cold brew. It also included ancho chile liqueur and cinnamon syrup, which was a delicious twist. Kind of like a subtly spicy and spiked dirty chai in the best way.

There are also some bar bites available including nuts with bacon and savory caramel, olive artichoke dip in a rye bread bowl, crispy polenta with goat cheese, honey and mint, and even an egg nog crème brulee.

If you’re still hunting for a gift for a special someone, they also have some merch available. The reindeer shot glass and sippin’ Santa tiki tub communal bowl would be a welcome decorative addition to any bar cart.

Julep is closed Monday and Tuesday, open from 4 p.m.-1 a.m. Wednesday through Friday, 2 pm-1 am on Saturday, and 2 p.m.-midnight on Sunday.