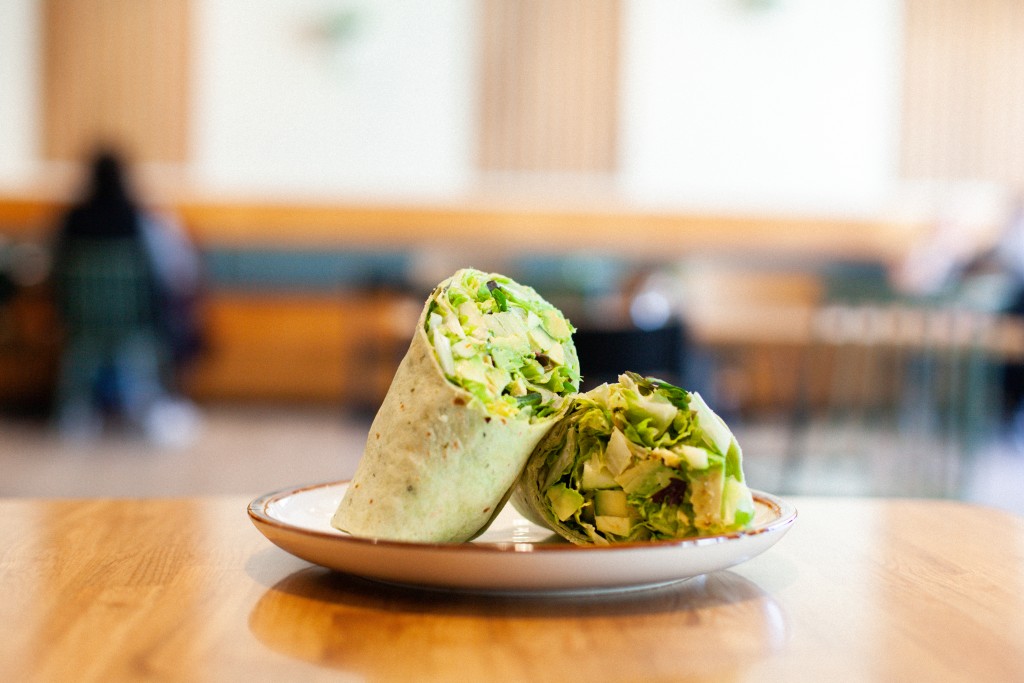 The Greenhouse wrap from Kind Food with apples, grapes, avocado and other green fruits and vegetables. // Photo by Liz Goodwin

One of Kansas City’s most loved vegan and vegetarian spots has settled in a new, and much larger, home.

Kind Food planned to open today, but are having to close because of the winter weather—so watch their Instagram closely and stop in later in the week.

The concept quickly outgrew its former location in North Kansas City’s Iron District, and now the team is serving its sought-after vegan eats in a much larger space. Their Kansas City, Kansas location is just a stone’s throw away from the Shamrock Kansas City Joe’s.

The menu includes familiar favorites such as their “Bac’n Mushroom” burger and their extensive lineup of nachos smothered in cashew queso. They also offer quite a few veganized barbecue entrees such as the “BBQ Jackpot Nachos,’ barbecue baked beans, and a fully loaded barbecue sandwich with slow-roasted jackfruit, classic slaw, and a Farm to Market bun. 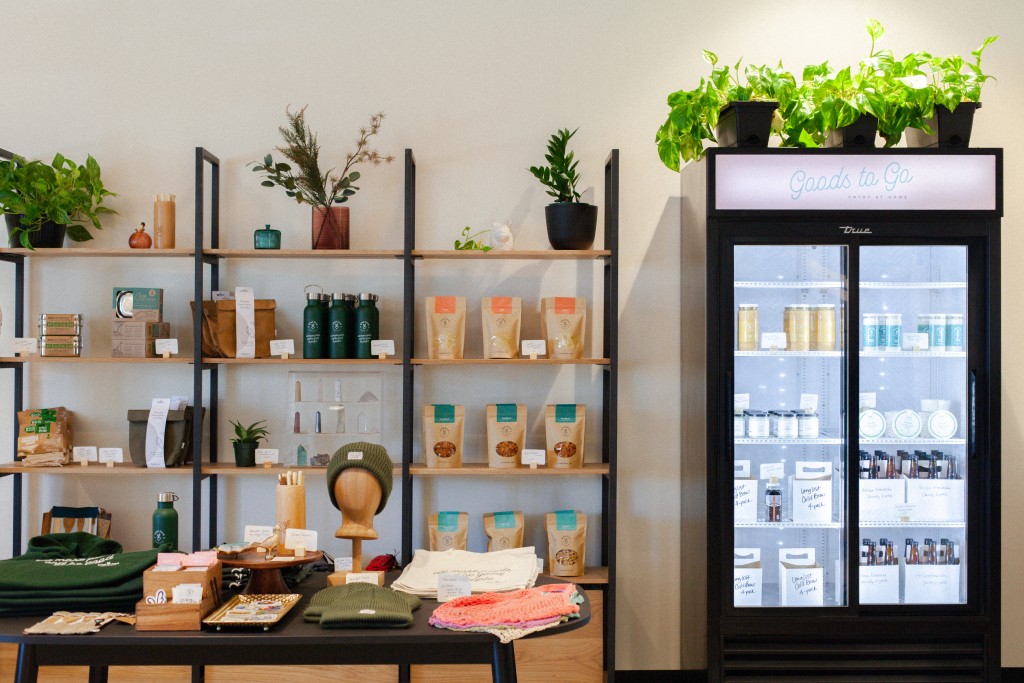 Now that the kitchen staff has more elbow room to work, there are also some newcomers to the slate of offerings. The greenhouse wrap is one such newcomer, although it’s actually kind of old school. It was nixed from the menu for a while due to its long ingredient list, but now there’s more room in the fridge and the item has returned.

It’s made with green apple, grapes, broccoli, cucumber, and avocado served with fresh greens, toasted pepitas, and tossed in an herbed agave-mustard dressing. It’s crunchy, creamy, and good for you, a winning combination.

And if you need a sweet to balance out all of those vegetables, there’s also some of those available at the counter. Cookies and brownies are there to satisfy sweet cravings, and they also have local cold brew and kombucha to quench your thirst.

If the food wasn’t pretty enough, the interior space rivals that of an Anthropologie display. Bright colored paintings and sleek midcentury modern furniture create picture-perfect pockets for eating and socializing. And for those who believe in retail therapy, there’s also an adorable little shop featuring some vegetable-hued beanies, hoodies, water bottles, and to-go bites for later.

Dinner from Italy, with love at Lazia

If you’re on the hunt for Valentine’s weekend dinner plans, Lazia is teeing up some good eats with their “La Festa Degli Innamorati” menu.

The dinner for two features a prix fixe menu with items such as house-made rosemary focaccia, served with three cicchetti options: mussels scapeche with chile, garlic, and lemon; ricotta with honey and pistachio; and prosciutto di San Danielle with fruit mostarda.

Each person can then choose from two main courses, the Alla Gricia with rigatoni, guanciale, and pecorino, or the Paccheri with San Marzano tomato, ricotta, and parsley oil. Sharing plates are also included, and patrons can pick between a whole Branzino or a roasted Norton Farms pork coppa.

For dessert, three affogato are available—one made with goat cheese ice cream, apricot, and walnut, one with chocolate brownie fudge ice cream, and one with a mulled wine sorbet. If you’re not into ice cream (if so, I have questions), there’s also a Torta Caprese with blood orange marmalade and Italian meringue you can split with your man, woman, best friend, mortal enemy, etc. Whoever you want to end the night in a food coma with. 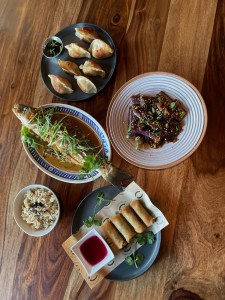 The Lunar New Year menu from Chewology is available through Feb 12. // Photo by Chewology

Kick off the Year of the Tiger in style by enjoying local plates from some of Kansas City’s most beloved Asian establishments.

Chewology has several special dishes on deck through Feb. 12 in addition to the regular menu. The fare includes shrimp spring rolls, a crispy whole fish, eggplant, and a sage pineapple smash that can be prepared with bourbon or left non-alcoholic.

They will also be delivering on the dumpling front, perhaps what most people reference when they gush about how good this place is. Dumplings are traditionally eaten during the Lunar New Year to usher in wealth and good luck, so if you’re stuck between two and can’t decide, it’s best to get them both.

Bo Lings is also offering a special menu for groups large and small at all of their KC metro locations.

The seasonal bites, which will be served through Feb. 15, include New Year’s boiled dumplings made with pork and shrimp; assorted appetizers such as shrimp rolls, eggplant, and crab rangoon; sauteed whole flounder with a choice of garlic and ginger or yu hsiang sauce; and a honey walnut sweet and sour combo made with chicken or shrimp.

A New Year’s Cake is also available for dessert, and according to the eatery’s Instagram, it looks as though this batch has been a special one so far—one that’s poised to bring a good year with it. Check out the rest of the restaurant’s social channel to learn more facts about the holiday and all its delicious and historically rich traditions, and if you scroll hungry, make sure you have your phone handy to place an order.

Bo Ling’s, a beloved Kansas City staple for over 40 years, has 5 locations throughout the metro. Check out their website for the details and specific menus of each spot.