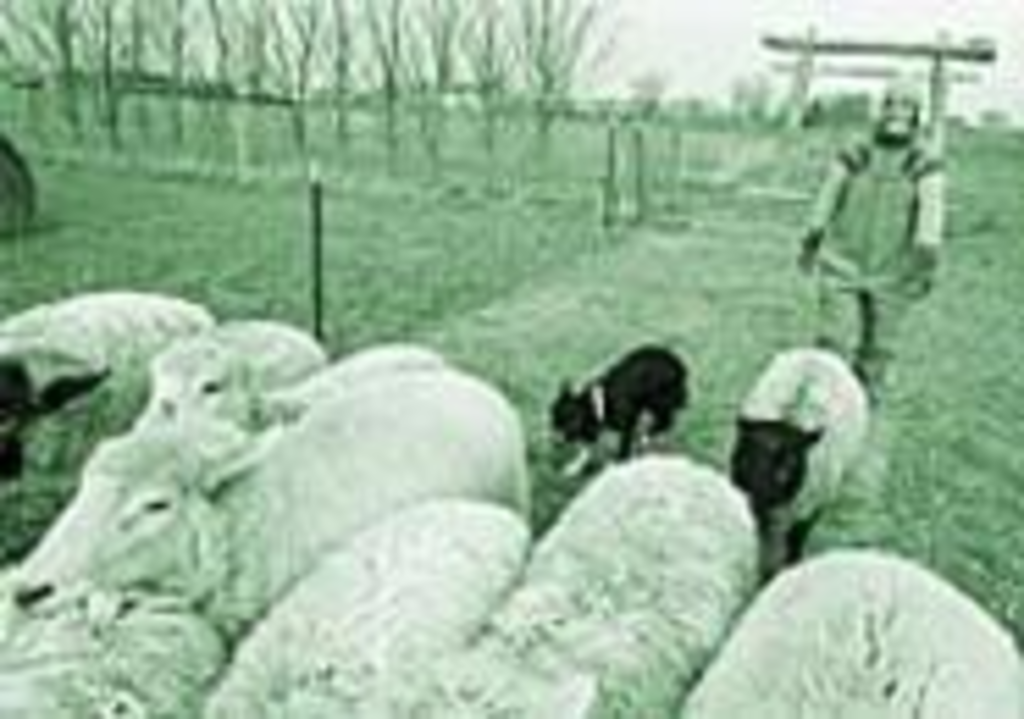 Natalya Lowther grabs a fistful of tan dirt from her Pinwheel Farm and squeezes.

It packs like wet snow, the wrinkles of her fingers still visible when she opens her hand.

“Sandy silt loam” is the technical name for the soil left on her 11-acre farm over thousands of years of Kansas River flooding. Its granules are so fine, they draw moisture up from the water table 20 feet below. While other gardeners watered in vain all summer, Lowther never had to irrigate. She sat behind perfect tomatoes at her farmers’ market stand.

“It’s just really a perfect soil in almost every way,” she says.

Lowther is also holding tight to a longtime dream she fulfilled five years ago. That was when she and John Lowther, then her husband, bought the 10 acres behind their North Lawrence home and began changing it from a row crop field to a small-scale, model farm collective.

They installed fences and planted pasture grasses for a flock of what are now 20 sheep. They dedicated a strip of land nearest the drainage channel as part of a federal riparian protection program. They churned dirt for gardens where they let their neighbors plant vegetables for free. They improved the chicken house and fenced area where 60 ducks, geese, and chickens scratch the dirt.

The effort has meant sacrifices.

Lowther, 42, says she makes only $5,000 to $7,000 a year, mostly from selling her eggs and vegetables, her sheeps’ meat and milk, and knitted goods from the sheeps’ wool. She has no health insurance. She grows or raises most of what she eats. And her only utility bills are for the phone and electricity; she gave up gas service when she found out a new line would have ruined her rose garden. She now relies on a wood stove.

There are other things she misses less than heat — including television, radio, and newspapers and their “propaganda that holds forth a certain lifestyle as the one right way to live,” she says.

“When John and I were together, we had a combined $70,000 a year income,” Lowther says. “It didn’t buy happiness. It didn’t buy satisfaction with my life. It just bought stress and disconnection with the real world around me. I didn’t have time to be a good friend to my friends, to take care of my sheep as I wanted to, to eat tomatoes that had been picked two minutes before, to go for a walk when the weather was nice.”

Lowther doesn’t sound crazy as she talks of her dreams. Why shouldn’t people cut their own hair? Why not live off the land? Why not embrace a more tribal existence based on trade rather than monetary exchange? Why not knit in the evenings by a wood stove instead of turning on the television or playing Nintendo?

Because sheep aren’t allowed to live in the city.

The bulldozers aren’t idling at Lowther’s curb yet, but they will be after Lawrence completes its North of North Street Area Plan, which will guide development as the city reaches farther north, bridging the gap between the city limits and Lawrence Municipal Airport north of Interstate 70.

The planning document, now in draft form, is expected to go to Lawrence-Douglas County planning commissioners in January and to the city and county commissions in February. It calls for “low-density residential” development where Lowther makes her home and for light industrial development north of I-70.

Once commissioners approve the plan, development will come quickly.

John Chaney, a Lawrence home builder and developer, owns or has options to purchase 32 acres around Pinwheel Farm. Chaney says his plans to build 30 to 60 homes have been on hold while the city puts together its development plan, and he’s tired of waiting. As soon as commissioners approve the plan, the treed and farmed acres surrounding Lowther will give way to pastel, wood-paneled slab homes like the others that have sprung up in the neighborhood.

Lowther could cash in, selling her suddenly valuable land for $200,000 or more and moving on. That kind of money would buy a lot of dirt somewhere else.

That would be the typical approach, says David Corliss, Lawrence assistant city manager. “With increased development you have increased interest in people offering you money,” Corliss says. “The ability to make money from agricultural pursuits isn’t close to what you can make by selling.”

Lowther can keep from selling, but she won’t be able to avoid becoming a part of the city. The city’s policy is to annex property when it is surrounded or nearly surrounded by city limits, Corliss says. When Lawrence annexes Chaney’s developments, the city will force the issue with Lowther.

The best Lowther can do is cut a deal that would allow her to maintain her farm in its existing condition for as long as she owns the property. The annexation agreement could be negotiated, Corliss says, but past experience indicates that Lowther would not be allowed to expand her operation or pass those rights on to another person.

Then all the regulations that go with city living would apply. No more sheep or chickens, no more freedom to build barns or other agricultural buildings without permission, no more well water and septic tank — and, therefore, no more Pinwheel Farm.

“I don’t agree the city has the right to tell me (the farm) has to end with my lifetime,” Lowther says, “that no one else can pick up and carry on what I’ve started.”

Lowther is not waiting quietly for that day. She is requesting that the city declare her property green space on the city’s zoning maps and that it be kept agricultural in perpetuity. She argues that there’s no good reason her operation can’t coexist with suburban family living. It does now, allowing neighbors to walk to her farm to pick up fresh brown eggs or tend their gardens. Lowther figures if she can tolerate the whine of the interstate and the outdoor lights of the county’s juvenile detention facility across the drainageway, her new neighbors should be able to put up with a crowing rooster and the odor of sheep dung.

If Lowther’s vision has a chance, it is in her North Lawrence neighborhood, which has a long history of garden agriculture and a more tolerant approach to landscaping. “There were whole blocks that were gardens,” says Ted Boyle, president of the North Lawrence Improvement Association. “We used to grow everything from corn, tomatoes, beans, strawberries. I’m more for Natalya and her position, and the neighborhood association is too.”

But Lowther will have to please more than her current neighbors.

“It just depends on how her new neighbors will look at her,” Boyle says. “It is probably going to be pretty controversial.”