Director Steven Lewis Simpson on Neither Wolf Nor Dog, opening today at Liberty Hall and the Tivoli 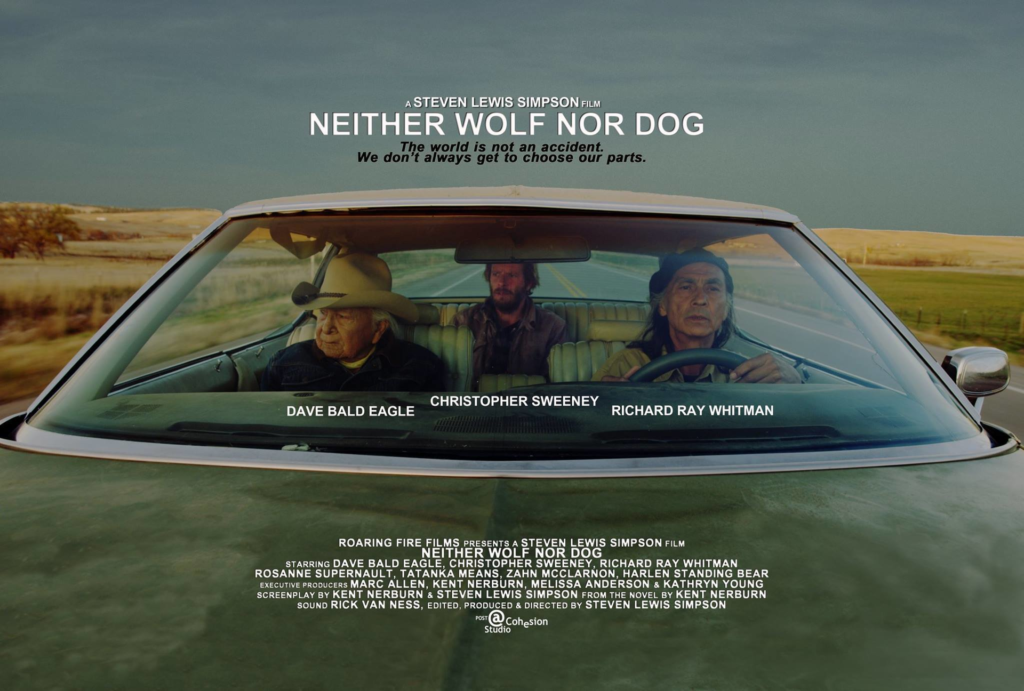 Director Steven Lewis Simpson’s Neither Wolf Nor Dog — an adaptation of Kent Nerburn’s award-winning novel of the same name — is a slow, meditative movie. It’s also, once you get used to its deliberate pace, a rewarding story. David Bald Eagle plays Dan, an elder who reaches out to Kent Nerburn, played by Christopher Sweeney, to write a book. Neither Wolf Nor Dog traces Nerburn’s journey to learn about Dan as they drive through Lakota country (with Richard Ray Whitman’s Gary). The result isn’t a tearjerker or a comedy road picture or a finger-wagging moral lesson, but instead something that feels real.

I spoke via Skype with director Simpson about the process of bringing Nerburn’s book to life, 20 years after its publication.

The Pitch: It’s been a lengthy process bringing Neither Wolf Nor Dog to the screen, hasn’t it?

Steven Lewis Simpson: It’s one of those classic Hollywood scenarios of the author getting all of these pie-in-the-sky offers — and from some reasonably well-established producers and directors — almost straight away from the book being published. He [Nerburn] developed a screenplay with one, but it was always going to have to be done in too Hollywood a way to make anything like that happen.

After 18 years, he’d just about had enough of it, and he happened to be on Pine Ridge Indian Reservation at the same time as I was, and we happened to be staying at the same motel in this border town. I was showing this movie I had made, called Rez Bomb, at this little theater, and he was intrigued. Came along, saw it, and was amazed because here was someone that could get things done, because he was getting fed up with all the ones who couldn’t. Also, the fact that it was made from the reservation out, rather than Hollywood in.

That’s sort of the problem with films shot within Indian country: Hollywood has a dire record at depicting natives on screen. Even when they think they’re being good about it, you end up with films like Bury My Heart at Wounded Knee, and they’re patting themselves on the back for their authenticity. However, I’m looking at it and thinking the director’s never been around native peoples in their life.

How did you go about shooting the film to bring authenticity to it?

Shooting this with Dave Bald Eagle. This was his first starring role. He’d been in a few things before, and had some key scenes, but he goes to some deep places. I can’t imagine him giving of himself in that way if there was this whole machinery around. So much of it [the filming] was built on trust — and not only trust; there was love. We all felt incredibly deeply about each other. It was such a special experience.

The three leads, myself and our sound person, Rick [Van Ness] — we were the only crew throughout the entire picture. It was that intimacy that allows the film to have a quality that transcends its limitations, shall we say. If you switched your soul off and analyzed the film, you could look at some of the shortcomings within the picture, but the heart is so deep within it, that’s what I think really transcends everything.

What else did you do to get those performances, especially from David Bald Eagle?

I think that the most valuable aspect of the film is that it almost does something that you shouldn’t do, which is when we go into the scene at Wounded Knee, it’s no longer Dan and Nerburn. It’s really Dave and Chris. You think that should be something that snaps you out of the movie, but they’re so in this primal place. It was the last scene they filmed together. What we are watching is documentary. We have stepped out of a movie into a 100-percent improvised scene.

At the end of that scene, Dave said to Chris, “I’ve been holding that in for 95 years.” So that is what we are witnessing at that point. At that point, what was in the book and what was in the script felt trite, because what we’d been filming felt so honest and so real, and a lot of the devices of storytelling felt like devices. By the time we got to that point, it just felt like we should let everything else go, and go to this simple little place.

Why is important that the film plays Lawrence — is it due to the fact that Haskell pops up as a plot point?

It’s been a priority of mine since the film opened to bring it to Lawrence. Obviously, Haskell has its two mentions, but it’s always important for me for this film to be in key parts of the native community, and Haskell holds a special place for a lot of people in the communities. So, I’m very proud of that, and very pleased that we can screen it in Lawrence.