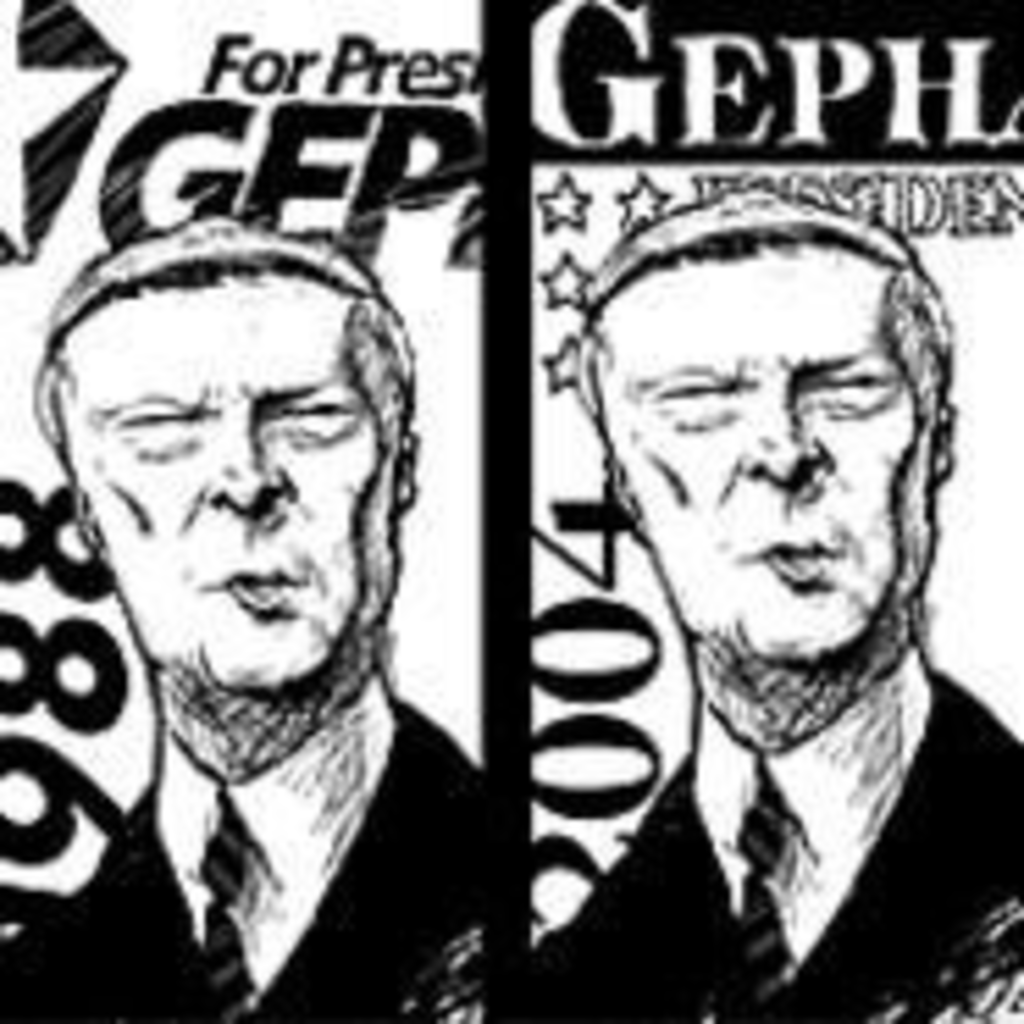 It’s the lobby of the Adam’s Mark on a Saturday morning in May, and most of the guests stumbling out of the hotel look like they’re from Omaha or Ames, groggy but ready for tailgating at the Royals game across I-70. The guests filing into the hotel are a different story, though. A woman in a red, white and blue, flag-patterned blouse with frilly lace stands at the door, repeating directions in a thick smoker’s voice: “The Democrats? All the way back. As far back as you can go.”

So we go back. Waaaay back. Through a long tunnel, as images float past. A space shuttle explodes. An American hostage is killed in the Middle East. Newspaper stories reveal something weird going on between the United States and Iran. George Bush is running for president. We hear music — some annoying girly man singing about “The Lady in Red.” Suzanne Vega whining about some kid named Luka.

“Today, surrounded by my family and friends, and not far from where I grew up and on the site where Harry Truman accepted victory, I am announcing my candidacy for President of the United States,” Missouri Congressman Dick Gephardt is saying. “When America elects the next President, I intend, with your help, to finish first.”

But then, we’re jolted awake. It’s 2003, and we’re sitting at a round table in the Adam’s Mark ballroom, staring at platefuls of gooey bacon and green-flecked eggs. Here, a few hundred hardcore Jackson County Democrats are celebrating their annual Truman Days, a weekend of speechmaking, drinking and cigar smoking at the hotel. And now, up at the microphone, Governor Bob Holden sounds as if he’s practically weeping.

“It’s an honor to share the podium with a great congressman, a great American, our next president: Dick Gephardt!

“I’m proud to call him my friend and my candidate,” Holden continues. “I know this man, I’ve been with him, I know what makes him tick.”

A hush falls over the room, the sort of quiet that allows a mind to wander. Is it really wise to brag that you know what makes Dick Gephardt tick, considering that Gephardt’s a tanned robot who’s had a big, fat L on his forehead ever since he dropped out of the presidential race fifteen years ago, thereby losing the Democratic nomination to Michael Dork-akis? Who had that same loser light shining from his beady eyeballs last November, when, as House Minority Leader, he took much of the blame for letting his party’s hopes of returning to power evaporate? Writing in The New York Times after the fall’s disastrous election, Frank Rich described Gephardt-led donkeys as “mired in the past” and suffering from “intellectual vacuity.”

Missouri Democrats don’t seem to have heard the news.

Gephardt is now making his way through a standing, applauding crowd, flashing a grin and a thumbs-up that make him look like a maniacal Ken doll. His speech involves joking that he and his wife are named Dick and Jane; promising health insurance for all Americans; taking credit for the Clinton-era boom times; and ripping George Bush’s economic policies as mindless — mindless!

He’s saying things good Democrats — hell, just decent human beings — want to hear, but how many people in the room really believe Dick Gephardt will be the next president? When you’re part of the Missouri Democratic Party establishment, though, you apparently have no choice but to back the blond bomb. You suck it up and do your duty. Big-name Democrats from the western part of the state, such as Auditor Claire McCaskill and Congresswoman Karen McCarthy, signed on to a list of honorary cochairs for the state’s Gephardt campaign back in February. McCarthy might have been tipsy when she did it, but now both of them just look silly.

Deep in his heart, Gephardt knows it, too. “It’s not about me,” he’s saying earnestly up at the podium. “It’s about us.”

“He goes into Iowa being the favored son and has potential when he goes to New Hampshire,” she’ll explain a few days later. “Of course, you have [Vermont Governor Howard] Dean up there as well as [Massachusetts Senator John] Kerry — I can see the two of them dividing up that primary. I don’t Gephardt would win that, but it’s a real defeat for Kerry if he doesn’t strongly come out of it. If he doesn’t, that strengthens Gephardt’s position even more. He has staked out issues important to the American people — particularly the issue of guaranteed health care.”

After all, Shields reminds us (in what’s turning into the mantra of Democrats everywhere), “when Clinton beat George No-W Bush, less than a year before, Bush had been at over 90 percent popularity. At the time of the election that had plummeted into the 30s and 40s.” Shields isn’t troubled by the fact that, unlike Clinton, Gephardt lacks any noticeable charm.

“I have to tell you,” she says enthusiastically, “the last couple of times I’ve seen Gephardt speak I’ve been very, very impressed not only with the subject matter but the charisma he has displayed. In that speech on Saturday he had humor, pathos — he really went the gamut in laying out his concern about issues facing America.”

Maybe so. But if you really hate what George W. Bush, along with Missouri patriot John Ashcroft, is doing to America, you wish someone from our state would just be honest. Just stand up and say, jeez, let John Kerry be the cannon fodder, not someone who’s been branded a loser since Johnny Depp was on 21 Jump Street. Spare Missouri rank-and-file Democrats the humiliation.

At least the envelope licker sitting at the table eating gooey bacon knows the truth. No, the elderly lady says in a whisper, she doesn’t think Gephardt will win.

And if she doesn’t believe, how are we supposed to?