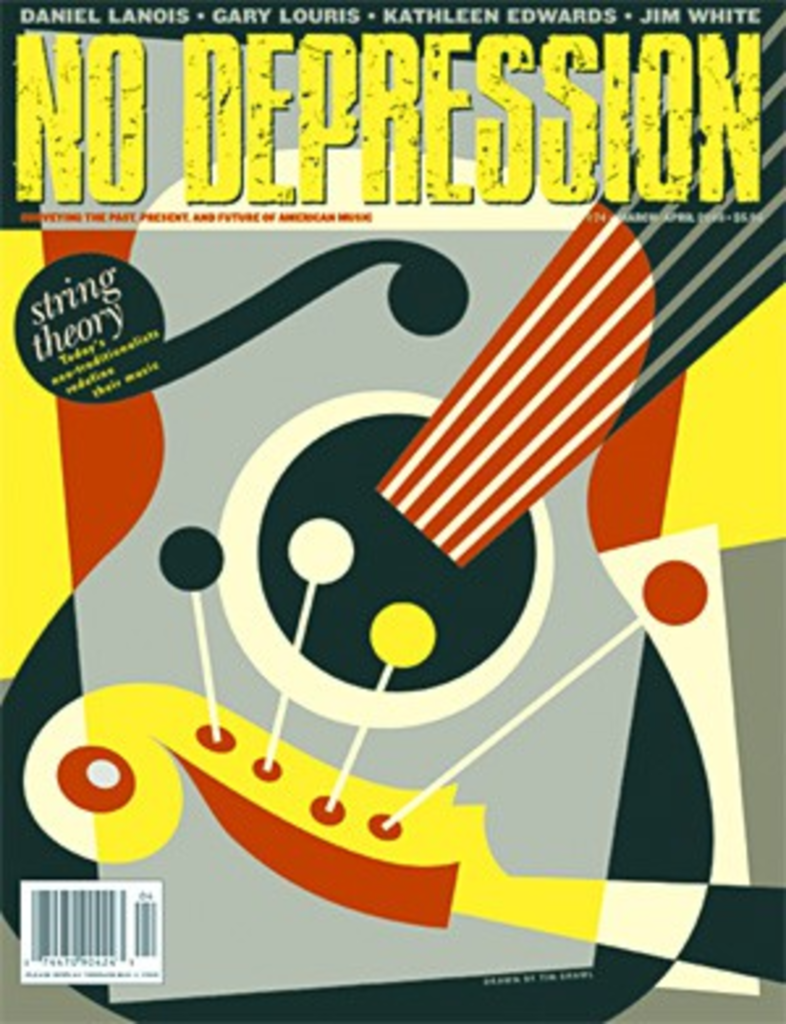 “No Depression” by Uncle Tupelo from the band’s debut album, No Depression, available on Sony Legacy:

A couple of weeks from now I’ll spend a weekend proofreading the upcoming installment of the magazine No Depression. This issue marks an anniversary of sorts — this will be issue No. 75 — but for a lot of us, the occasion will be more heartbreaking than celebratory. No Depression has dug around the rootsiest corners of American popular music for 13 years. But now, due generally to a rapidly changing music business and, especially, to a one-third decline in the magazine’s ad revenue in just the past two years, the May-June 2008 issue will be No Depression‘s last.

I’ve been proofing the magazine every two months for years now, but with only rare exceptions has it ever felt like work. In truth, each time the next round of files began arriving in my in-box, there was a part of me that was amazed all over again that the magazine existed at all. Most music coverage, for far too long and with no end in sight, consists of little more than a frantic scrambling from one next big thing to the next, an icky, squishy collection of celebrity profiles and snarky 150-word album reviews.

No Depression felt like another country. The rag’s specialty, to borrow from poet Wendell Berry, was “the use of old forms,” exploring the ways that musical styles and genres persist — honky-tonk, bluegrass, punk, old-timey, gospel, the blues, good ol’ rock and roll, and so on — even without the endorsement of Total Request Live, college radio, alternative weeklies or Grammys. Each ND arrived like a long, deep breath, a pause to consider where we’ve been and where we might be headed and then to decide — this is an essential value of all traditions — just what from Now and from Then we might yet need farther on up the road.

Detractors, I know, like to think of any interest in the musical past as one form or another of nostalgia, but such dismissals are usually wrong. More than anything, No Depression argued that our forebears have something to say to us that we could still stand to hear, not least of which being that our new stories are bound up in their old ones. We cannot shape a future, at least not any future we’d want, without deep grounding in the past. Plus, out-of-the-spotlight artists such as Mavis Staples and George Jones, gospel singer Isaac Freeman or 21st-century string band Old Crow Medicine Show, each a subject of major features in the magazine, were all making great music, and people needed to know it.

No Depression was named after an AOL newsgroup that lifted the title from an album by the band Uncle Tupelo, on which it had punked up an old Carter Family number called “No Depression in Heaven.” This was in 1995, when so-called “alternative country” acts such as Uncle Tupelo spin-offs Wilco and Son Volt (and Uncle Tupelo mimics like Blue Mountain and Whiskeytown) were whispered to be the next big thing (along with techno). To no one’s great surprise, America proved resistant to twang-mania’s charms.

But No Depression thrived, quickly outgrowing the self-deprecating description of its early years: “The Alternative Country (Whatever That Is) Bimonthly.” Soon enough, and in no small part thanks to the campaigning of its several senior and contributing editors, ND began to cover bluegrass, soul, blues, folk and any sort of country too loud or too twangy to make it on the radio — really, just about any sort of popular music that could be termed “rootsy,” what some call “Americana.”

In some ways, No Depression never stopped being the fanzine of its origins. The magazine’s circulation peaked at 38,000 (with about 10,000 subscribers worldwide), and its new-releases section, even 13 years on, still rarely included negative reviews. Mostly, though, this we’re-just-fans-writing-for-fans approach was the magazine’s key to lasting as long as it did.

ND was an entirely desktop affair. It didn’t have an office or even meetings, and it remained the vision of its co-founders and editors in chief, Grant Alden and Peter Blackstock. Indeed, the pair routinely passed on feature queries simply because they didn’t like the artist in question’s new release or even because they figured the act was already famous enough to guarantee plenty of coverage elsewhere. Better to shine ND‘s light where its illumination was needed. So instead of, say, Bruce Springsteen on the cover, a natural fit for the magazine’s aesthetic if ever there was one, it would be some far less well-known singer-songwriter — Patty Griffin or Mary Gauthier, Kelly Willis or Kansas City native Iris DeMent, Buddy and Julie Miller.

Or it was “King of Rock and Soul” Solomon Burke or the forgotten midcentury R&B diva Little Miss Cornshucks or a country legend: Ralph Stanley, Merle Haggard or Porter Wagoner. Or “younger” alternative-country artists such as Alejandro Escovedo, Robbie Fulks, Gillian Welch, St. Louis’ Bottle Rockets or the Drive-by Truckers.

An incomplete roll call of regional acts that made it into the pages of ND would include not only DeMent but also Mike Ireland and Holler, Howard Iceberg and the Titanics, Hadacol, the Wilders, Rex Hobart and the Misery Boys, the Bindlestiffs, the Starkweathers, Split Lip Rayfield, the Domino Kings, the Morells, the Original Sinners and Jeff Black.

All of those acts, as well as the hundreds more who were featured in the magazine over the years, could count on No Depression to provide the consistent notice they knew they’d never get anywhere else — and that they needed if they were to build a career.

And the worthiest among them saw those careers essayed at unheard-of lengths: A cover story I wrote last year on Porter Wagoner ran to 9,000 words! It’s hard to imagine just where any of these artists will ever be taken so seriously again.

The magazine never grew into its somewhat grandiose new cover tag, “Surveying the Past, Present and Future of American Music,” but it came closer to that mark than any other rag in the rack, and I think it was always headed in the right direction. Now, “barring the intercession of unknown angels” (to quote the latest issue) and excepting whatever limited version of the magazine may continue online, No Depression will head only in the direction of the sunset.

Like a really great country weeper or soul lament, it breaks my heart.