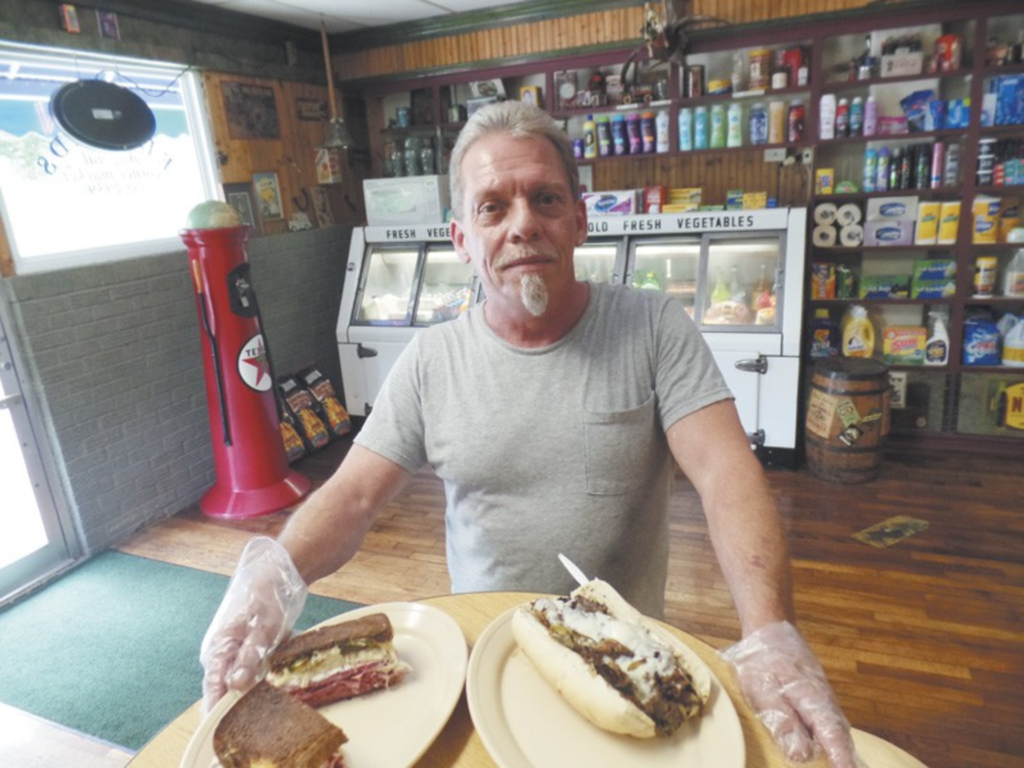 Dennis Edwards was barely out of his teens, a young felon in Leavenworth Penitentiary, when he got a solid piece of advice from a fellow inmate and veteran Chicago mobster.

“His name was Joey Lombardo,” Edwards says. “He looked at me and said, ‘Kid, you’re too smart and too nice to be in a place like this. You need to get out of here and stay out.’”

The problem, Edwards says, was that he didn’t know what he wanted to do when he was finally released from prison after 13 years.

“I’m a very good mechanic. I can do that,” he says. “But my only other skill was working in my father’s grocery store, and he had closed that down.”

The two-story building that formerly housed the family store was still standing at 81 North Mill in Kansas City, Kansas. Edwards’ father, Cedric “Walkie Talkie” Edwards, was living on the second floor, in the big apartment where he had raised his four sons. However, the first-floor grocery store, which the senior Edwards operated from 1959 to 1985, was filled with junk.

“From floor to ceiling,” says Edwards, who took over the building after his father’s death in 2006. “We hauled away 27 truckloads of stuff from the space before we cleared it out.”

Edwards says he made a promise to his father that he would pull his life together and reopen the family store, Edwards Original Corner Market and Deli. “I didn’t know how I was going to do it,” he says, “but I knew I had to do it — for myself and for this neighborhood.”

The whitewashed structure with blue awnings at the intersection of Mill and Reynolds streets in Kansas City, Kansas, is the last relic of a neighborhood that once boasted as many as five family-owned groceries.

“There was one for every community,” Edwards says, “an African-American store for those customers, a Croatian market for those patrons. It was an ethnically diverse neighborhood, and people patronized their community’s stores.”

The other neighborhood businesses near this street of brick sidewalks and immaculately maintained bungalows are long gone. But Edwards Original Corner Market, which Dennis Edwards reopened in 2007, evokes a time when there was always a shop within walking distance that sold bread, milk, soda pop, cigarettes, canned goods, toilet paper and cleaning supplies.

Some kind of grocery has been inside this building since 1929, when the Miller family operated it, selling many of the same products that Edwards sells today. Edwards still uses the glass-and-white-enameled-steel
Tyler refrigeration case that the Millers bought in 1942 and his father later paid for in monthly installments. It’s still as shiny and clean as it was 72 years ago — and ice-cold, too.

“I have a completely new motor in it,” Edwards says. “It’s state-of-the-art.”

Edwards knows every customer who walks into his store by name. “That’s how you succeed in this business,” he says. “You create a community.”

His greatest success, he says, was adding a deli.

“That’s where most of my business comes from,” he says. “There are wonderful ethnic restaurants in this neighborhood, but I’m the only one doing the old-school, traditional sandwiches: Reubens, New York–style hot dogs, gyro sandwiches, club sandwiches, Philly cheesesteaks, cheeseburgers, fried-shrimp baskets. I’m making food from the time I open the doors in the morning until I close at 4 or 5 p.m.”

The delicatessen hours are from 10:30 a.m. to 5 p.m. Monday through Friday and from 11 a.m. to 4 p.m. Saturday and Sunday. Edwards also smokes his own barbecue meats every other Saturday. But good luck trying to get ribs from Edwards, no matter how early you try.

“I’m usually sold out before I even cook anything,” he says. “I start getting phone calls with request orders the day before I even put wood in the smoker. By the time I’ve got the smoker stocked and burning, I’ve sold everything before I’ve put the meat in the smoker.”

Edwards still sells cigarettes in his market but no longer offers liquor. He also delivers food, like he did when he was a kid, but most of his deliveries are for sandwiches and pizza.

“I never thought, as a young man, that my life would come full circle and that I’d be back in Kansas City, Kansas, running my father’s store,” Edwards says. “But it was the best promise I ever made to my father and the one that made him the most proud.

“They say that you can’t go home again,” he adds. “Well, I did, and it was the best thing that ever happened to me.”