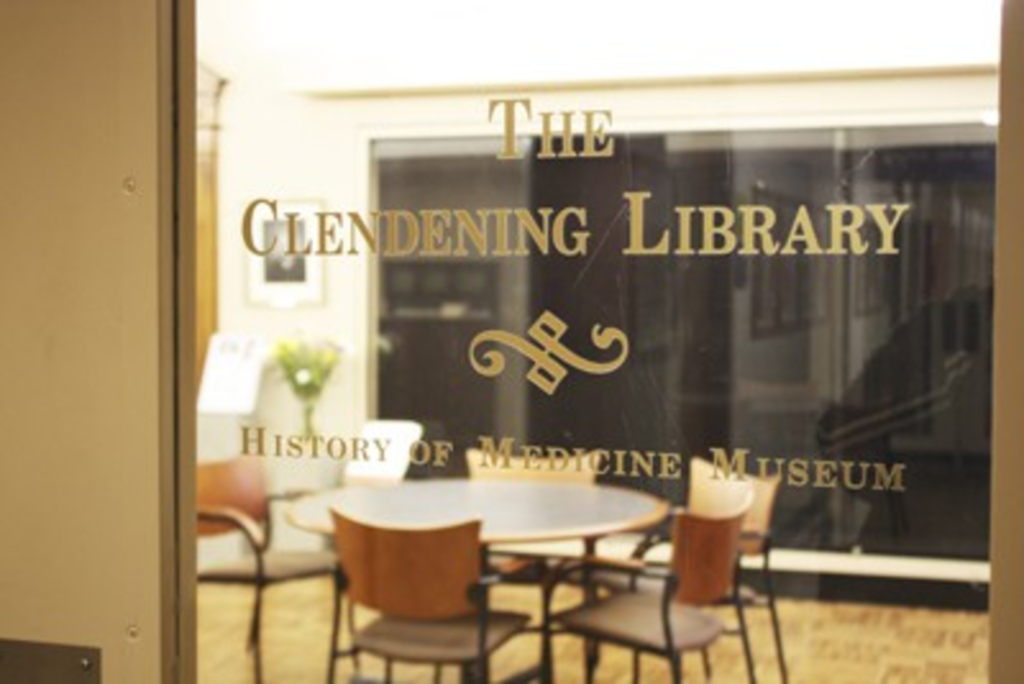 Title: This week, an assortment of alarming medical correspondence

Representative quote: “Now it is true that Dr. Tracy had some brains in a container when the night watchmen went through the building.”

Recently, your Crap Archivist enjoyed a humbling visit to the Clendening History of Medicine Library and Museum at KU Medical Center, where Museum Curator Nancy Hulston — a real archivist — shared with me the jewels of the university’s holdings. I don’t mean its wealth of historic records, films, prints and medical equipment. No, I mean the important stuff: creepy marriage guides from the 1920s or “Miss Scoliosis,” a sculpture of a young woman crafted from surgical instruments. Hulston’s staff oversees such diverse curiosities as a 1950s X-ray machine the same color pink as Jackie Kennedy’s pillbox hat and, as she puts it, “photo archives with about 100,000 images, including a two-headed baby and ‘Goat Boy.'”

Hulston brings just a dash of P.T. Barnum to her duties.

Here are three alarming letters she culled from the library’s voluminous archives. (Your Crap Archivist has changed some names.)

“Dangerous to All Concerned”

First comes A.J. Lampwick’s explanatory note to Dean H.R. Wahl, dated June 15, 1935. Medical student Lampwick, it seems, has been charged with the care of a vacationing doctor’s patients — despite unease among his colleagues that he might not be up for the job.

“I have just received your letter concerning the rumor that I am going to perform tonsillectomies during Dr. Petitt’s absence,” Lampwick writes. “This rumor is absolutely without foundation. I agree with you that such procedure would be ‘over my head’ and dangerous to all concerned.”

With that cleared up, Lampwick summarizes his accomplishments. “During Dr. Petitt’s absence I have performed such minor surgical procedures as the suturing of superficial lacerations, opening a felon, and the dressing of several badly lacerated and contused fingers.”

All in all, Lampwick finds the situation enlightening but a bit scary. “I am enjoying my work here very much and am gaining invaluable [experience], especially in the handling of private patients. I occasionally experience attacks of stage fright but seem to recover very well before the patient is aware of my condition.”

“Naturally, No One Wishes to Eat Food of This Type”

By 1938, Dean Wahl had more pressing problems than fumbly ol’ Lampwick’s habit of opening felons. The hospital could no longer stomach the canned food that the state required it to purchase from a penitentiary. On April 7, 1938, Wahl fired off a note to Kansas Business Manager J.A. Mermis in Topeka.

Wahl reports, “This noon there was quite a furor in our dining rooms owing to the fact that worms were found in the green beans; a locust, a worm 5 inches long, a fly, and shorter worm were found in the vegetable served in the dining room this noon. Naturally, no one wishes to eat food of this type. Personally, I do not wish to eat any more green beans myself, after seeing this.”

He continues, “The corn is unedible [sic], so we have not had canned corn in the dining room for the last two months, for it means eating penitentiary corn or none at all, and everyone prefers going without.”

Not everything is rancid, though. Wahl concedes, “The beets we have been serving are fairly satisfactory, but are not desirable.”

“It Is True That Dr. Tracy Had Some Brains in a Container”

Finally, we turn from the deadpan Wahl to a brainpan spill. In 1949, a night watchman complained about walking into a gray drizzle of — well, let’s leave it to Paul G. Roofe, professor of anatomy, to explain. From his October 7 letter to Building and Grounds Superintendent C.G. Bayles: “Now, it is true that Dr. Tracy had some brains in a container when the night watchmen went through the building. It is quite possible that perhaps one or two were in the sink, but it was water that was dripping in the hallway from a leaky sink.”

Though he stands firm on the impossibility of hallway brain-drip, Roofe admits that the Department of Anatomy has been plagued by several leaky sinks. “I shall have these necessary repairs made and I can assure you that no water coming from any brains or any other part of the human body will drip on anyone in that part of the building.”

Your Crap Archivist plans to dig deeper into Hulston’s marvels in the months ahead. Until then, keep your feet on the ground and your brains in their containers.