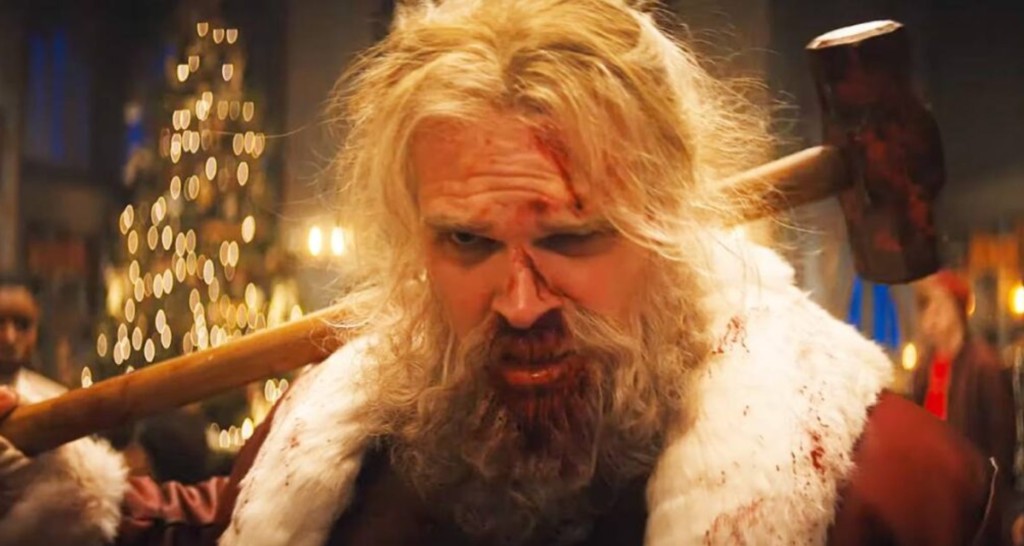 Meet Trudy Lightstone (Leah Brady). She’s on Santa’s nice list; she’s kind to animals, listens to her parents, and she even invited that weird kid to her birthday party. Unfortunately, Trudy is spending Christmas at the family compound, with her (separated) parents Jason and Linda (Alexis Louder and Alex Hassell), shallow extended family (notably Aunt Alva, played by Edi Patterson) vodka-swigging, overly-botoxed Grandma Gertrude (Beverly D’Angelo), and a band of roughly half a dozen festively-nicknamed mercenaries led by “Scrooge” (John Leguizamo). Grandma has three hundred million dollars in cash secreted away in a vault, and Scrooge wants it.

Luckily for everyone, the real-deal Santa Claus (David Harbour) is also there to leave presents under the tree and help himself to milk and cookies (and cognac), and he’s happy to take the opportunity to scratch some names off the naughty list… permanently.

Tommy Wirkola’s Violent Night quickly and gleefully establishes the ways it differs from traditional holiday movies: this Santa has chest tattoos! And a big hammer! And a drinking problem! Our protagonists dislike spending time with family not because they’re clingy or prudish, but because cousin Bertrude (yes, really) is sexually harrassing his peers and grandma is ruthless, materialistic, and emotionally cold.

The film is so focused on inventive edginess that it almost forgets to have substance. The dialogue may have elicited uproarious laughter from the crowd at the preview screening, but it will feel dated by President’s Day. Every twist is telegraphed, and with the exception of one big nod to Home Alone, the fight scenes felt lackluster.

It’s certainly easy to cynically nitpick the film’s inconsistent tone, but there are just enough moments of joy that make Violent Night worth watching. Small touches, like the train around the Christmas tree, capture the Christmas spirit. Brendan Fletcher of Freddy Vs. Jason fame shines as Scrooge’s gleefully violent henchman (codename: Krampus). Fans of Universal’s other Holiday Big Guy (Michael Myers, natch) will get a real kick out of one piece of dialogue in particular.

It isn’t immediately obvious who Violent Night is for. It’s crass and violent, but also a heartwarming anticapitalist family movie. Every character feels like a caricature, but it’s hard not to be pulled in by their personalities. It’s exactly what you’d expect from the man who helmed the Dead Snow franchise, and ultimately it’s nice to finally get a big-budget theatrical holiday movie that isn’t saccharine.

For those with unconventional holiday traditions, film fans who are more Better Watch Out than Christmas Vacation, Violent Night is a welcome, if somewhat shallow, addition to the annual Christmas movie marathon. Part Home Alone, part Dial Code Santa Claus, Violent Night may just be the movie to bring Black Christmases and Bad Santas fully into the mainstream.