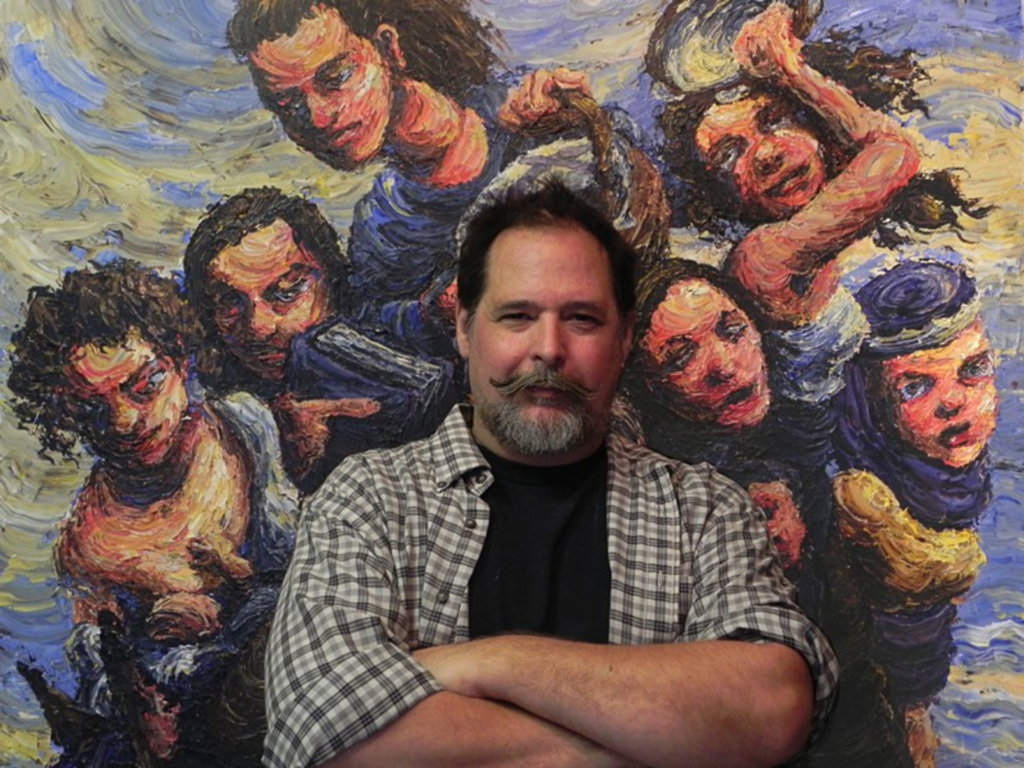 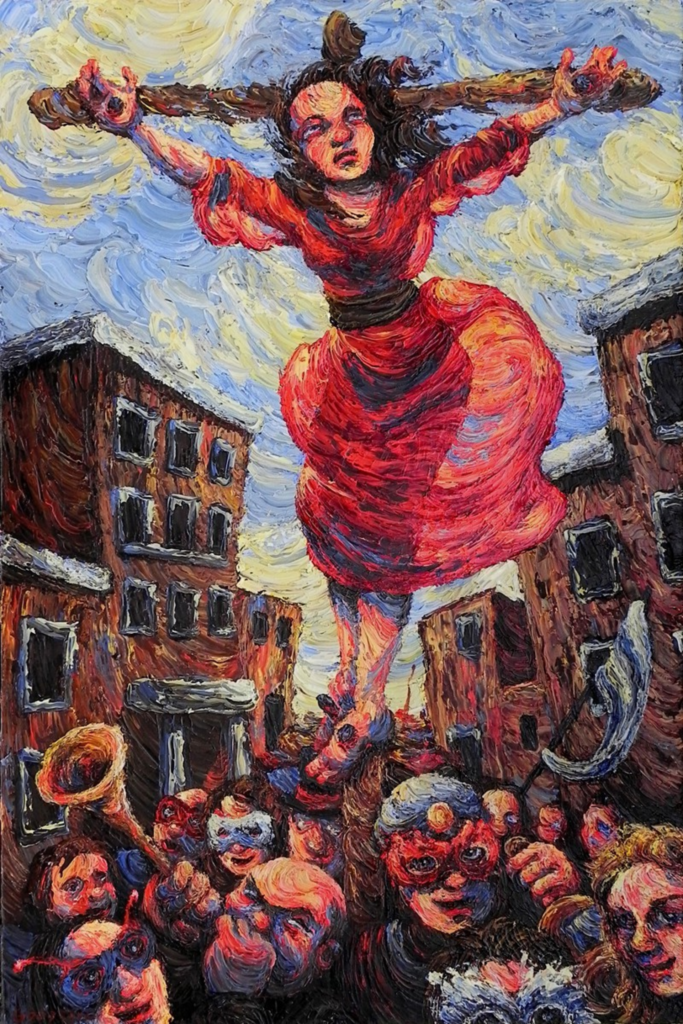 A young woman bound to a cross, her eyes turned upward, is marched through a narrow street by masquerading revelers. A man is sucked underwater in the greedy embrace of a mermaidlike creature. A happy youth astride a scarab beetle sails ahead through space, bringing a lighted staff and, with it, the dawn. There’s a lot of drama in David Goodrich’s paintings.

That drama comes from the subject matter, but it also comes from colorful impasto — thick, roiling strokes built up so that figures appear almost as though sculpted out of clay. His technique adds to the narrative strength of his best paintings; even depictions of quieter scenes, such as a group of accusers poised to condemn an unfaithful woman, exude the tension of what may or may not happen.

His subjects don’t lack for dramatic force: They include characters from still relevant mythologies dating back to the foundations of Western culture, starting with the ancients from the “cradle of civilization” through Egypt, the Greeks and the Romans, and simultaneously the Jewish and Christian traditions, and even Guatemalan folk saints such as Maximon. Asked why he paints, this artist gives the friendly but elusive answer that it’s what he has always done. He’s an avid self-taught humanities scholar, too, and he can cite details of Egyptian funerary beliefs with ease and explain that we know the story of Osiris and Isis because of Plutarch, a Greek historian who became a Roman citizen and transmitted the stories of Egypt. Goodrich summarizes his choice of subject matter in one of his essays by saying our present culture still has hold of the symbols of biblical and classical mythology, whether people recognize the symbols or not. The symbols resonate because they reference human fears and passions that have not changed in thousands of years. Perhaps each of us is embedded with the residue of what came before.

Originally from Oklahoma, Goodrich also uses icons from the American Southwest, particularly the once ubiquitous buffalo and representations of the kachina spirits of the Pueblo Indian cultures. He has just returned from another trip out that way, to Los Angeles, with stops along the way in Mesa Verde, Colorado; in Albuquerque and Roswell, New Mexico; and the Hopi reservation in northern Arizona.

Goodrich has spent most of his adult life in Kansas City, and it’s where the majority of his 30-some group exhibitions and 13 solo or two-person shows have been. A major accomplishment just behind him is Lucifer Rising, a retrospective of sorts that was for many of us an introduction. It included 25 large-scale paintings and five drawings, and the sum of its parts dominated the challenging main gallery of the Leedy-Voulkos Art Center the past two months. (Jim Leedy himself was enamored enough to acquire two paintings and a drawing in a trade with the younger artist.) The pieces, ranging from about 3 to 6 feet in size, represent a fraction of Goodrich’s large body of work, which is meticulously cataloged on his website (goodrichpaintings.com), complete with descriptions of the characters.

The crucified woman? She’s St. Julia, a young Christian woman who had the unhappy fate of being aboard when her owner pulled up to a pagan island during festival time. The inhabitants got the man drunk, and he sold her for a ritual. The namesake for Lucifer Rising, which Goodrich explained to a group touring with the Crossroads Community Association’s Second Saturdays program back in April, isn’t really a central theme, but the story illustrates the way things change in culture over time. The painting “Lucifer: Morning Star” has nothing to do with our modern conception of “Satan” but rather with the Latin-derived name itself for morning star, “light bearer.” Lucifer, he points out, is mentioned only once in the Judeo-Christian Bible, in Isaiah, and he has nothing to do with the devil.

Goodrich’s studio is a stark, smallish room in his midtown house, which is hung with artwork by friends and even the famous. A mini legion of kachina dolls lines the mantel, and his antique mechanical tin toys, from his dad’s collection, are nearby. The studio room bears the 1987 painting that he made after a chance meeting with William S. Burroughs. The portrait, all in angular lines, shows the author on his porch in one of his valedictory poses and hints at the writer’s infamous sense of dangerous play.

With a memory full of roadside attractions, the Southwest landscape and kachina dances — Sam Dinsmore’s Garden of Eden; Niki de Saint Phalle’s Queen Califia’s Magic Circle; Simon Rodia’s Watts Towers; and strange desert cemeteries, where Horace McAfee has put up tin monuments or where others have simply heaped stones or used bedsteads to frame their loved ones’ graves — Goodrich seems poised to create some more innately touching and culturally educational paintings. The themes in his work of passion, rejection, and desire for meaning or salvation speak across time, with high-contrast colors that draw us in for a long look, as a mirror invites us to search for ourselves.

“Or,” he answers when asked outright about what’s next, “I might just do some writing.”