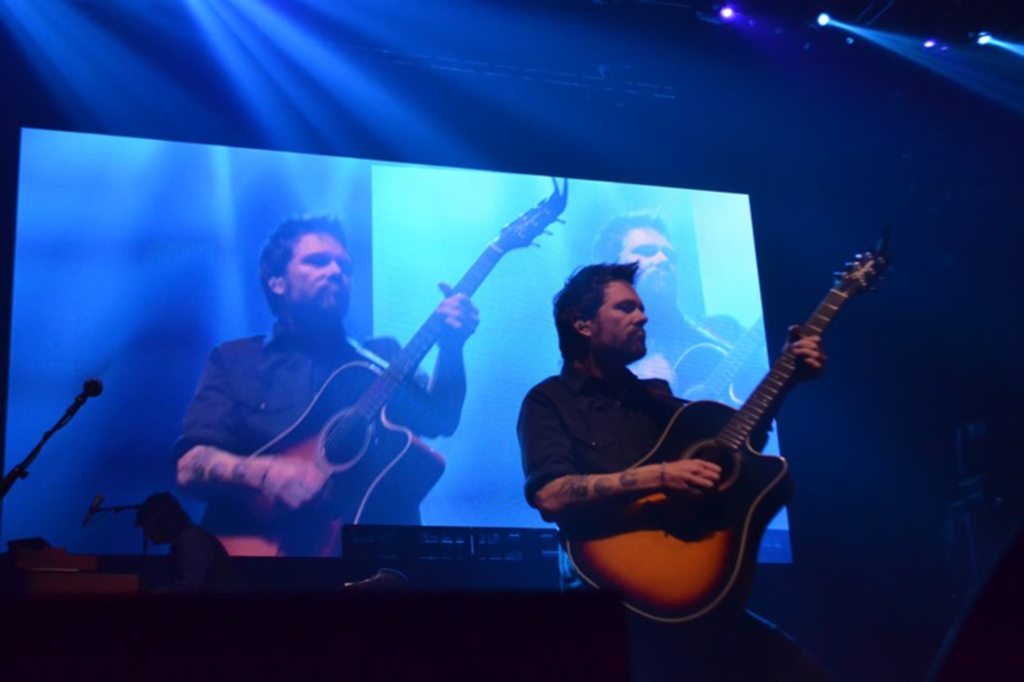 David George is a damn busy man this holiday season. In addition to a reunion of his former band, Moaning Lisa, at the Riot Room on Friday, December 27, he’s organizing a benefit show at RecordBar on Sunday, December 15, entitled Coats for Kids.

Getting a few bands together and giving the door proceeds to a charity isn’t a new concept, by any means, but George is the man behind all three acts playing the benefit this Sunday. Before a headlining set from his band the Crooked Mile, he’s fronting the Crooked Christmas Revue, playing a selection of holiday numbers written by George himself. The whole evening is kicked off by George and a string quartet interpreting some of his solo material.

We spoke with George by phone about how all of this came together.

The Pitch: So, tell me a little bit about the Coats for Christmas benefit.

George: It’s a benefit to gather coats for children that don’t necessarily have any coats, through Operation Warmth and Coats for Kids. It’s kind of a weird thing. This whole thing started because I just wanted to do some of my older songs I normally play with a band, but with a string quartet – play for some friends and family on a Sunday night. Then Steve [Tulipana] at the RecordBar was like, “Why don’t you have the whole night?”

For a long time, I’ve been thinking about doing a Christmas show, because I have these Christmas songs that I wrote a long time ago for another band. It just started turning into that, and I thought, “Let’s make it Christmas, let’s make it for kids.” Someone mentioned Coats for Kids, and I loved the idea, so that’s the way it all came together.

Who were those Christmas songs originally written for?

My manager used to manage Royal Crown Revue, and a ways back, they were thinking about doing a Christmas record. I wrote three or four songs, and my producer and I co-wrote a couple. So I’ve had these songs for years and just never performed ’em live, and didn’t know what to do with them.

Christmas songs are great, because if they’re decent, they get played each year, so I thought, “Yeah, let’s do some Christmas songs.”

You’re going to release one of those, I saw?

Yeah, one of those – it’s a little separate from the Royal Crown Revue stuff. I wrote it for my niece and nephew, back when they were just 8 and 9. It’s a song called “Tonight’s Child.” It’s a nice little lullaby song about a kid sleeping, waiting for Santa to come. I just finished recording it, mixed it, and hopefully it should be out [this] week. Anyone who downloads it, a portion of the proceeds will go to Coats for Kids.

What made you want to do the string quartet?

I’ve been a rocker for years – playing with [John] Fogerty, rocking out – but my first solo record had some strings on it and horns. I actually did it a few years ago. My bass player couldn’t play, and my drummer couldn’t make it, and I didn’t have a guitarist. I had a violin player and my cellist, and just added another violin player, then Johnny Hamil stepped in to play bass on the upright.

I didn’t get to do it properly – I didn’t get to arrange the strings very well – so I thought this year, let’s do it. I just thought, I’ve got a bunch of songs that are very acoustic-based, some just have cello, so I thought, let’s arrange violins in there as well. Nobody’s really done much like that – I’m not saying that they haven’t, but I thought it would add something to the scene and be something different in terms of options, instead of your typical rock band.

And a string quartet leads really nicely into a set of Christmas music.

Well, yeah. The Christmas stuff, I envisioned as kind of a Brian Setzer Orchestra, but I wasn’t prepared to put the whole thing together. It’s still drums, bass, guitar, a couple singers, and then a saxophone player. So it’s going to have that kind of jazzy, Christmassy kind of “Jingle Bell Rock” vibe to it. It’s coming together, and I threw Crooked Mile on at the end of it, just to have one last show before the end of the year.

How do you bring together all of these disparate parts of your musical career into one show?

Well, I’ve been blessed, being in Kansas City, with such an amazing pool of talent. L.A., there’s tons and tons of people, but there’s not the connection in L.A. you have here, where I’ve known a lot of these people for years. Or, even more recently, I’ve met newer people. Like, I’ve only known Betse Ellis closely for a few months. We were in a songwriting circle one night and chatting, and just had this connection. She’s arranged strings for “Tonight’s Child” and a couple other songs that are going to be played in the strings section.

Bringing in people like Marco Pascolino to play guitar with this amazing guitar, and Johnny Hamil, who’s like, one of Kansas City’s foremost upright bass players. And then, Shay Estes, who sings with Barclay Martin, she offered, like, “Hey, yeah. I’d love to help.” These people came together, just like, “Yeah, let’s do it!” It was that easy.

Coats for Kids takes place this Sunday, December 15, at RecordBar. Doors at 6 p.m. and the show at 7 p.m. Advance tickets cost $10, and jump up to $15 day of the show, but entry is half-price with the donation of a new or slightly used children’s winter coat.