Das Racist, the Internet’s favorite prankster, is stronger and smarter than you’d think 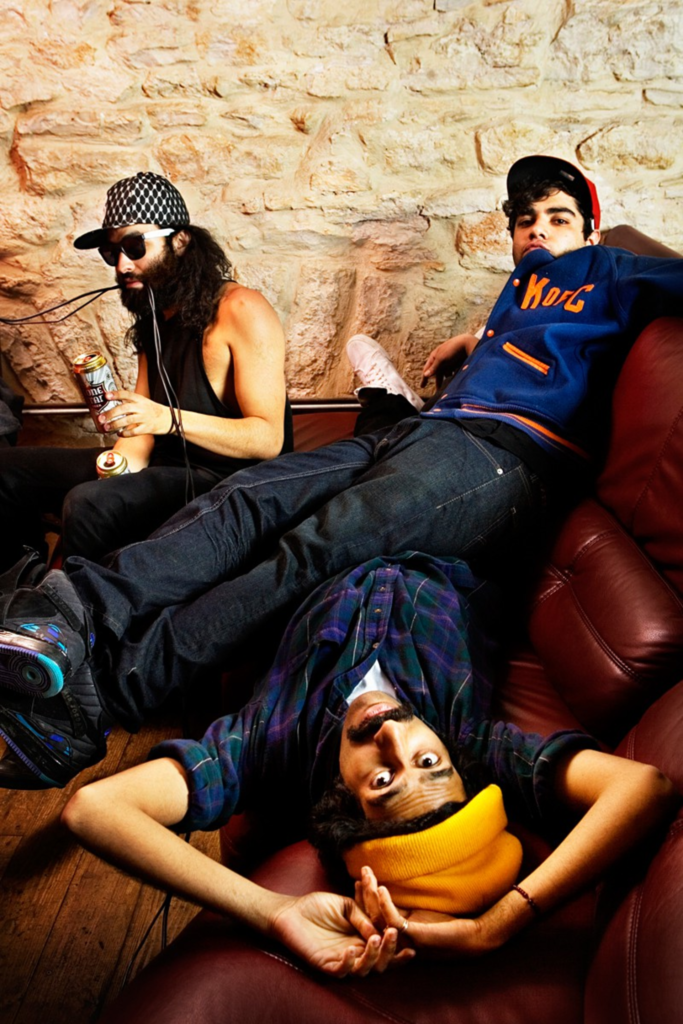 “Fuck, dude, don’t touch my guap! Sorry. Victor’s being a dick because I make more money than him.”

“We’re running through the South with two white girls, two Jews, a black dude and three brown guys,” Suri says. “You know how people in the South get when you fuck with white women. But nothing so far has been too problematic.”

Das Racist entered the collective consciousness through the Trojan horse of “Combination Pizza Hut and Taco Bell,” but the songs on critically lauded mixtapes Shut Up, Dude and Sit Down, Man are smarter and richer than that stoner-rap number lets on. The songs on the wisecracking mixtapes convey a smart wackiness, irreverence rooted in intelligence.

Since the moment that Das Racist unleashed “Combination Pizza Hut and Taco Bell” on the blogosphere, writers have been compelled to weigh in on Das Racist’s prankster presence. As soon as the trio was backed by a few websites, including the influential Pitchfork — the publication branded Shut Up, Dude with its “Best New Music” distinction — the media-savvy group was basically everywhere, ready to seize every outlet.

For The Village Voice‘s vaunted Pazz & Jop year-end roundup, Suri wrote a funny, thoughtful essay called “Thanks, Internet!” that chronicled Das Racist’s rise. Vazquez challenged New Yorker cartoonist Farley Katz to a cartoon-off, then depending on your interpretation, held his own. (New Yorker music writer Sasha Frere-Jones has also declared himself a Das Racist fan.) The group’s ever-present hype man, Dap (Ashok Kondabolu), stole the show in a recent Pitchfork TV feature. A version of the music video for “Who’s That? Brooown!” is a playable 8-bit video game. Late last year, Das Racist dropped in on Anthony Bourdain’s Travel Channel show, No Reservations. It was a righteous cameo in which Vazquez and Suri appeared inside Bourdain’s fridge. Suri is also no slouch on Twitter, with 22,000 tweets and counting (sample: “is matthew mcconaughy the only person of color we’ll see on the oscars tonight?”).

“I love my friends on the Internet, but I might have to give this up,” Suri says. “But it’s also good marketing, I hope. We’re not big enough where I don’t pick up my phone, but I feel like if we continue to get bigger, I’ll stop picking up my phone, except for when my mom calls.” But he still recognizes the power of the medium. “I think the punkest move of 2010 was when M.I.A. posted Lynn Hirschberg’s phone number on the Internet,” Suri says, referring to Hirschberg’s much-discussed New York Times Magazine profile of the provocative musician. “Like, this bitch did a bad interview, and they call her up. What’s more hood than that? What’s more hood than Twittering a phone number?”

At its core, Das Racist is the product of a long friendship between Vazquez and Suri, who met at Wesleyan, the prestigious Connecti­cut liberal arts college. (Their backgrounds are very different: Suri, a Queens native, is the son of Indian immigrants, and the half-Cuban Vazquez is from San Francisco.) There, they ran in the same circles as MGMT’s Andrew VanWyngarden and Ben Goldwasser, as well as other Wesleyan students who would later form such acts as Amazing Baby and Francis and the Lights.

Like psych-pop combo MGMT, Das Racist is the sublime result of two best friends trading on a personal dynamic — in this case, a shared sense of humor. Suri plays the cherubic, lovable jokester; Vazquez is his complement with his spaced-out weirdness. (Vazquez, on his developing skills as a lyricist: “A lot more Jewish mysticism, Hanukkah imagery, like some sort of glowing eye. If you looked into the raps, you would see this glowing eye.”)

Given their background, which is somewhat unconventional for rappers, it’s no surprise that a Das Racist gig isn’t quite like anything else you’ve ever experienced at a rap show. That vibe carries over to the crowd, too.

“There was a fucking cracker in the crowd with an Afro wig, like, two nights ago,” Suri says. “And he got angry and wouldn’t stop bothering us while we were rapping, and we threw money at him, and he still wouldn’t shut up. So Victor punched him and broke a bottle on his head, and they took him away. Dap summed it up right. It’s like, ‘Yo, I’m going to a rap show! I gotta put my Afro wig on!’ Who the fuck does that?”

Though Das Racist put out its first two mixtapes for free — Shut Up, Dude independently and Sit Down, Man released through Diplo’s Mad Decent label — its upcoming third offering, slated for summer, will be a commercial product.

“I was pushing it toward a swagger rock rap, and now it’s more like Indian psychedelic gutter reggaeton,” Suri says. “I’m gonna sell it and make a lot of money.”

Not knowing is half the fun.