Daily Briefs: I yam who I yam, sayeth your god.

I don’t know if you primitives noticed, but early this morning, I MADE THE SUN VANISH FROM THE HEAVENS! Specifically, the heavens over Siberia, Mongolia and western China. LO, I AM BECOME DEATH, DESTROYER OF WORLDS! It’s also a really advantageous time to see the solar corona, normally obscured by the intensity of the sun’s light.

KNEEL BEFORE ME, WRETCHES, LEST I SNATCH THE VERY STARS FROM THE FIRMAMENT AND RAIN DOWN THE FIRES OF HELL UPON YOUR “FIFTY IS NIFTY”-BALL-CAP-WEARING HEAD! The event duration was longest near the town of Nadym in Yamalo-Nenets Autonomous Okrug in Northern Siberia. I AM CHRIS, HE WHO LEAVES FIRE IN HIS WAKE! AND 50 IS NOT NIFTY SAYETH YOUR GOD!

Down in Chattanooga, Tennessee, the — gosh, how can I put this? — the fucking retards who mash at the keyboards in the Web department of WDSI Fox 61 with their thick, clumsy hands actually posted this poll question: 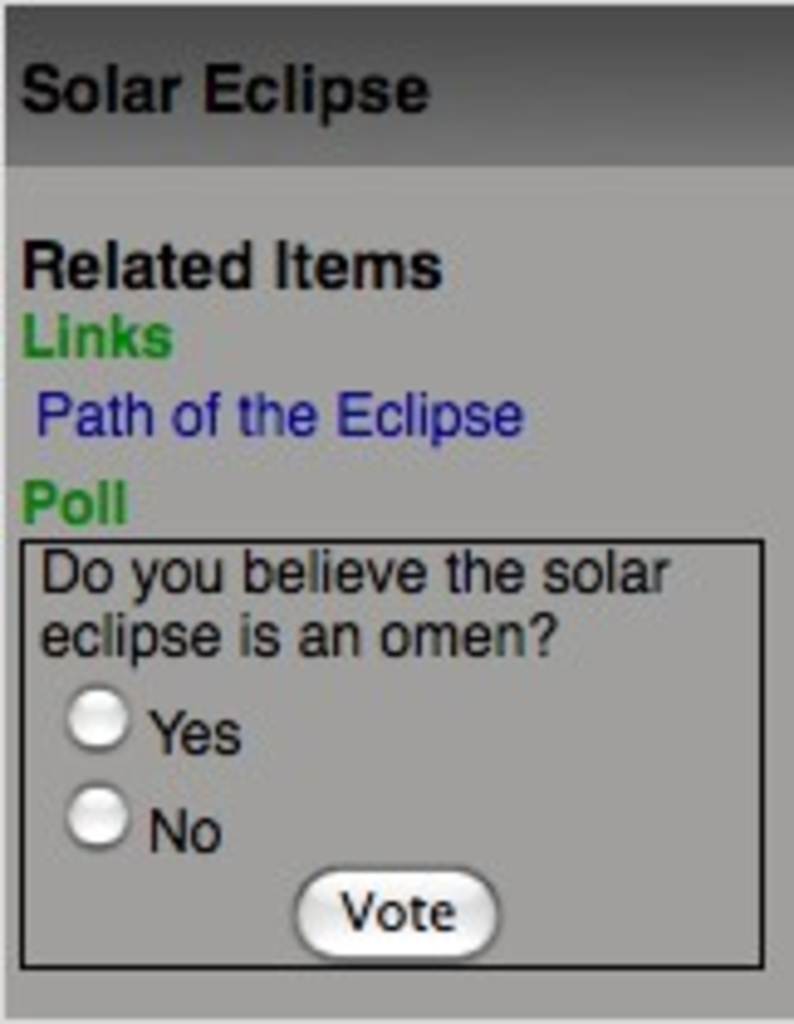 I guess the editorial belief in superstitious voodoo magic is more likely to manifest in hillbilly newsrooms, so I can only imagine that they were as shocked by the results as I was: 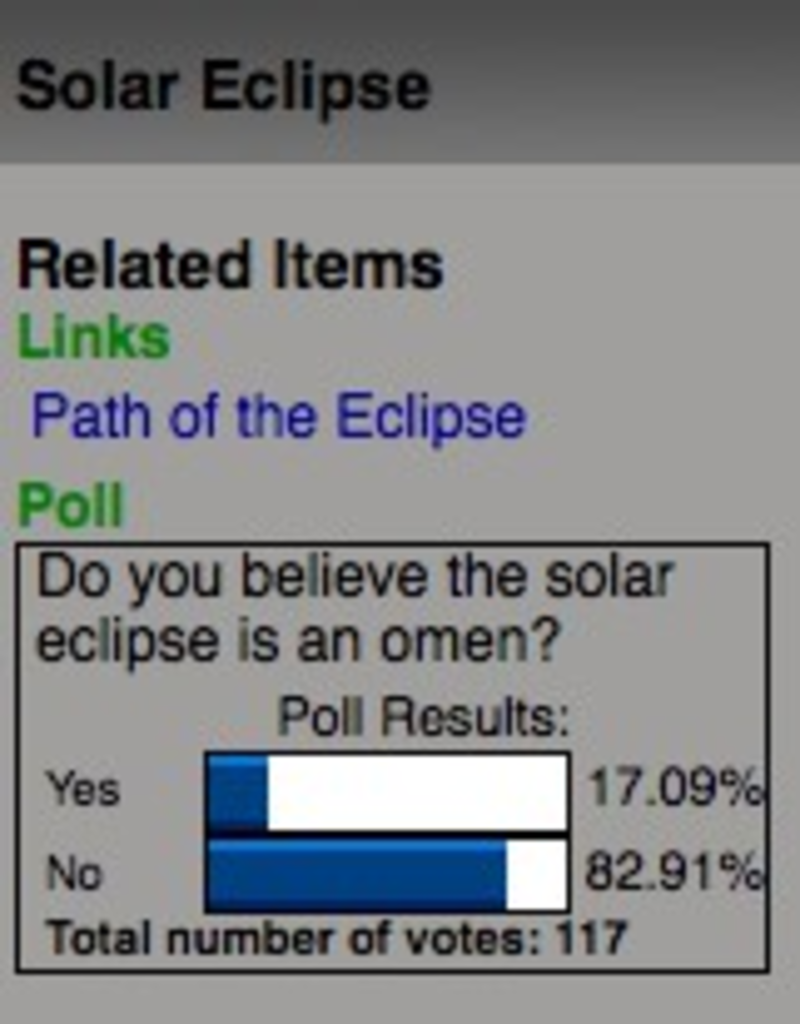 Apparently, 82.91 percent of respondents disagreed with Fox 61’s suggestion that eclipses and the births of three-headed goats are bad omens. The margin of error: Chris had to vote in order to look at the results. Also, I don’t know whether it’s relevant that Fox 61 covers a city that willfully refers to locomotives as “choo-choos.” In light of the new Venn diagram intersection of ooga-booga superstitious bullshit and statistical sampling, I commissioned my own poll to see how people thought I might destroy them if I were insufficiently appeased with their offerings and prayers:

All frightening prospects, which can best be averted by JOINING THE DAILY BRIEFS FACEBOOK PAGE. If I am not satisfied by the number of new network associates by end of business Friday, I SHALL MAKE THE SUN VANISH AGAIN ON JULY 22, 2009! So remember not to look directly at the sun while it’s disappearing — why not make a pinhole viewer out of aluminum foil?

After the jump, I get annoyed with an article in Adbusters, for some reason. Click here, or on the best picture that popped up when I typed “hipster douchebag” into Google’s image search: 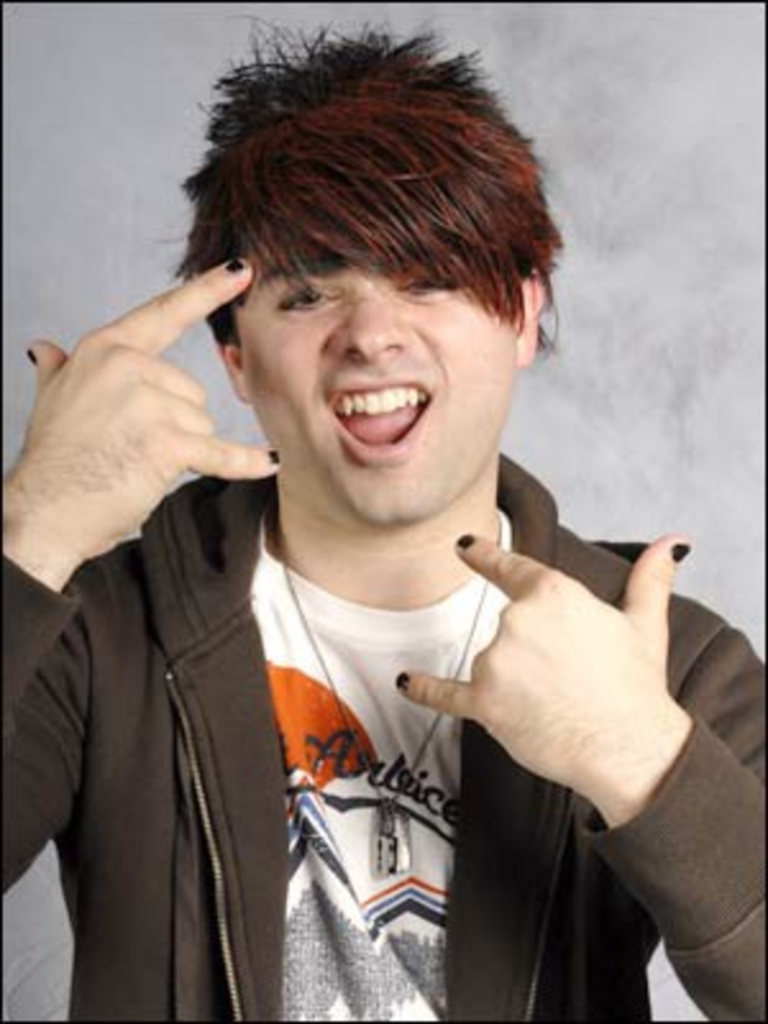