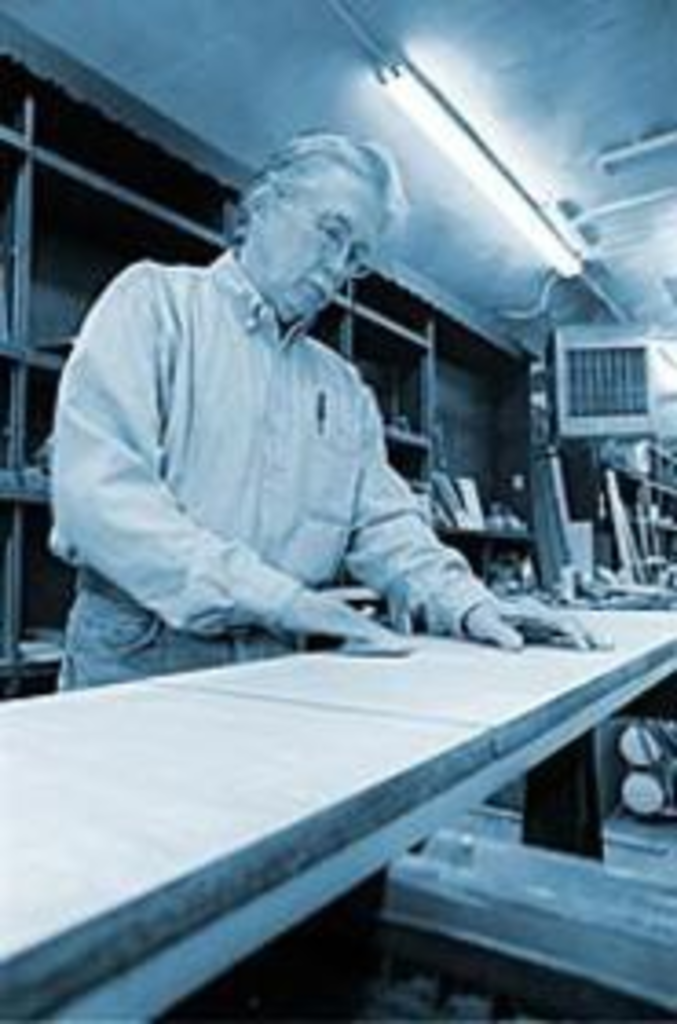 Michael Richwine looked in the mirror one day last month, and his face seemed fifteen years too old. His skin was sallow, and his crinkled blue eyes had lost their spark. His whole body seemed to droop. The pressures of owning Wizard of Wood and falling behind on $10,000 in custom woodworking contracts had sunk him into depression. Christmas was approaching with lights and carols, but Richwine didn’t care. His body ached, he was exhausted and he got little work done no matter how many hours he put in at his woodshop. He could not go on living that way.

One night he told his wife of 22 years, Jane Richwine, that he needed help. He had thought about suicide, as a last resort, but he couldn’t do it; his wife would be devastated. She phoned Johnson County Mental Health Center, where Richwine had sought treatment for depression four years earlier. On December 20, Richwine poured out his troubles to a soft-spoken screener named Tom Schroeder.

“I feel like a failure … I’m just a burden on my wife,” Richwine, 55, said through tears. Schroeder filled out a six-page form, checking off that Richwine’s demeanor was depressed, anxious, tearful, guilty, apathetic and pessimistic.

After Richwine learned that severe depression could be treated with medication, his face brightened, Jane Richwine recalls. Schroeder said he would set up an outpatient appointment for December 26, nearly a week away.

“I need something sooner than that. I’ll never make it that long,” Richwine says he told Schroeder. Schroeder later testified that Richwine actually used the words “I’ll be dead by then.”

Unknown to Richwine, the protective safety net of Kansas state law began closing around him as Schroeder quietly decided Richwine should be locked up so he wouldn’t harm himself.

Schroeder suggested that Richwine go to Rainbow Mental Health Facility in Kansas City, Kansas, a state hospital. Schroeder later admitted that he did not fully explain that Richwine would soon lose his freedom.

“I told him by going voluntarily he could sign himself out,” Schroeder wrote in a signed patient “progress note” that Richwine made available to Pitch. “I did not tell him he had no choice, hoping to avoid a power struggle.”

Richwine says he repeatedly told Schroeder that he wanted to make absolutely sure that he would be free to abandon the program if he was not satisfied with his treatment.

“So he let us go on our own, strongly implying that I was not a threat to myself or anyone else,” Richwine says. Or, as Richwine’s lawyer later said to Schroeder in court, “You didn’t think he was gonna go cap himself in the parking lot.”

At Rainbow, an admissions clerk furnished voluntary commitment paperwork. The papers stated that a patient had to give three days’ notice to leave and that he could do so only with the approval of the head of the center. Richwine realized Schroeder had not been honest with him. The couple decided to seek help elsewhere, but the clerk wouldn’t let them leave.

After hours of negotiation, several burly, uniformed men hauled Richwine to a room. The clerk contacted Schroeder, who obtained an emergency court order to keep Richwine confined until a commitment hearing could be held. Richwine, intent on getting out, watched the security guards for an opening. He made a break for it but slipped on a slick spot, breaking his glasses and cutting his face, requiring 22 stitches.

Bitter, Richwine resigned himself to being locked up, waiting for his wife, who was trying to get him out. His thick Rainbow file records staff members’ comments every fifteen minutes, around the clock. Richwine was reading a book, writing or listening to music. He was “polite” and “pleasant” and greeted the staff. Or he was “sarcastic,” angrily complaining about the unfairness of his “incarceration.”

“They held me there for a week on a one-to-one basis, with somebody watching me when I brushed my teeth, when I went to the bathroom, when I slept,” Richwine says. He even spent Christmas Day at Rainbow, with staffers keeping watch.

Adding to Richwine’s ire, he received a bill for $4,200 for his stay at Rainbow — including charges for his room and board and medical treatment for his fall. The bill, he says, compounded his acute anxiety about finances. He had no insurance coverage for such a hospitalization.

A Kansas statute states that “a treatment facility may admit and detain any person for emergency observation and treatment upon an ex parte emergency custody order issued by a district court,” and “the head of a treatment facility or other person may file a petition … seeking involuntary commitment of a voluntary patient who now lacks capacity to make an informed decision concerning treatment and who is refusing reasonable treatment efforts.”

A professional would seek such an admission if the person had acted in a dangerous manner recently, such as pulling a gun or knife on someone, or had made specific threats of suicide or harm to others, Smith says.

“If they say, ‘My life’s in the toilet; I wish I just wouldn’t wake up in the morning,’ we’re not going to assume that’s a suicidal statement,” Smith says. “We’re going to further explore exactly what is going on, ask them, ‘Do you have thoughts about ending your life? Do you have a specific plan or date? Do you really think you could do something to yourself where you would end up dead?'”

The chances of a person’s getting admitted against his or her will unnecessarily are slim, Smith says, since “the days of the Cuckoo’s Nest are over.”

Though Schroeder testified that he misled Richwine, Smith doesn’t quite like to put it that way. It’s “not about tricking or coercing,” she says, noting that state-run facilities charge $436 a day “plus your Kleenex” but have a sliding scale and work with payment plans. Richwine, after calling Rainbow repeatedly, finally got a letter from the facility promising that his bill would be canceled due to his special circumstances. Richwine refused treatment at Rainbow because he did not feel he could have a “trusting, therapeutic relationship” with doctors who were part of a system that he felt had betrayed him, and doctors couldn’t compel therapy because he had not been legally committed.

“I think they realized they had a terminally pissed-off individual on their hands,” Richwine says, explaining that the only psychiatrist he saw during his holiday stay basically “rubber stamped” the screener’s opinion.

On December 26, Richwine got a hearing before District Court Judge Sam K. Bruner. A county prosecutor argued Richwine should be legally committed to an institution. “It’s not that I ever wanted to die,” Richwine said in court. “It’s just that certain aspects of my life were becoming intolerable…. There’s a shade of difference there.”

Without pausing after lawyers finished closing statements, the judge declared there was no cause to have Richwine committed. Richwine, a Vietnam veteran, immediately sought help at the VA Medical Center in Kansas City and is now taking antidepressant medication. He says he is beginning to feel better, and he is catching up with his work. But he is still consumed by frustration over the ordeal he went through to get that help.

“It was hell, and it could happen to anybody,” Richwine says bitterly.