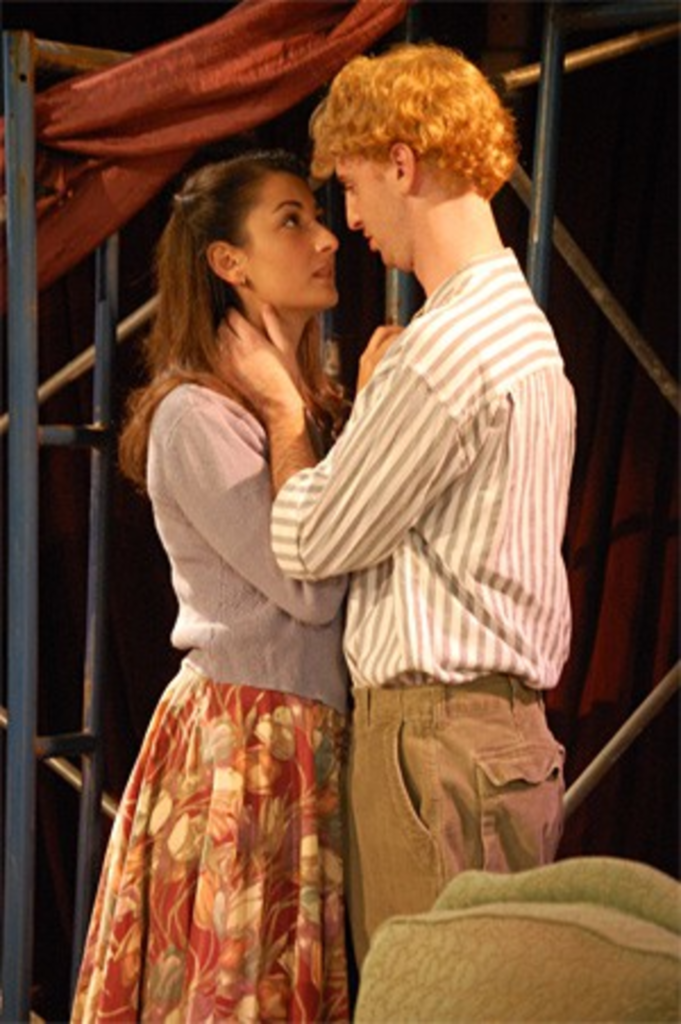 Craig Benton isn’t a lug, but he’s got some lug in him. With his wry, masculine face and his bearing of beer-and-football averageness, he’s the ideal lead for American Heartland shows. There, he’s perpetually cast as an architect or a sportswriter, done up in ball caps or button-downs, playing the straight man in every sense of the term. He bandies witless sitcom dialogue in something like The Nerd with such script-serving professionalism that his actual gifts become transparent. Instead of seeing all that he is, I always finding myself noting the things that he isn’t: unfussy, unmannered, entirely unpretentious.

Part of the problem might be his middle-American likability. Playing pretend sportswriters, he’s less a pugnacious Whitlock than a reassuring Posnanski, sensitive enough to feel things but lug enough that the Crown Center crowd never worries that he has an undue interest in haircuts or musicals. Now, though, he’s dropping the light comedy for painful human drama and ditching the nice-guy routine for the full-on lug. This being Kansas City theater, moving up in ambition also means moving down in theater size — in this case, to a rehabbed garage on Walnut, where Benton slow-burns through the Metropolitan Ensemble Theatre’s production of Arthur Miller’s A View From the Bridge.

He’s thrilling as a short-fused longshoreman scared that the world is snatching away his niece. His Eddie Carbone is as tightly wound as a baseball’s guts; he’s a hardworking Joe who’s articulate only when reminding everyone exactly how hardworking he is. In his first scene, he arrives home ground down by dockwork, but the way his wife, Beatrice (Jan Chapman), and his niece, Catherine (Natalie Liccardello), dote on him — and the way he beams back at them — clues us to two key facts: He’s happy here, and that happiness won’t last.

Change spoils things for Eddie. First, Catherine, whom Eddie and Beatrice have raised as their own, has ripened into 17 and no longer requires Eddie’s constant protection. Second, a pair of Italian cousins, illegals desperate for work, are coming to crash in his home. That problem A will intersect with problem B is a given. Complicating matters further are Eddie’s own feelings toward Catherine — as cousin Rodolpho (an excellent Doogin Brown) woos her, Eddie stews in a jealousy he can’t admit even to himself. As the problems compound, Eddie’s happiness sinks to frustration. He grows irritable, often comically — Benton responds dismissively to people without really listening, passing off disconnected yeahs and grunts as conversation. When he is engaged, he’s barking about how things should go. “I’m tellin’ you, you gotta do what I say, all right?” is a typical line, one Benton spits out with the same self-righteous cluelessness of Bill O’Reilly. As intermission nears, Benton has achieved something rare. He has sketched the character with such truthful clarity that, at each new slight, we laugh in anticipation, relishing his response before he even has a chance to react. Then, when he bottoms out into rage and storms out up an aisle, into the audience, we shy away. He looks like he might pop someone.

For most of that first act, the key elements are in rare concert. The script, direction and acting all compel us. We lean in, hungry for what’s next. The principals are all strong, and director Karen Paisley exploits the full width of her great garage so that the scenes and characters never feel pinned to a stage. Instead, they roam a world, surrounding the audience with the action. (The set, unfortunately, isn’t up to the rest of the show’s standard. Backdropped by fabric draped of scaffolding, it looks as if we’ve interrupted it while dressing.)

Act Two is something of a letdown. After the beautifully modulated first half, too much of Act Two is given over to one-note hollering. Here, Benton isn’t helped by Arthur Miller’s bad habit — common among midcentury’s Bigfoot playwrights — of shouting what should be hinted. Faced with clear evidence of Catherine’s love for Rudolpho, naturalistic Eddie lunges — briefly, bafflingly — into the realm of the theatrical, making a couple of violent passes in a scene that feels like Arthur Miller fan fiction. The same complaint applies to several overwritten monologues given to a lawyer acquaintance of Eddie’s; they’re puffed-up nonsense seemingly designed to make a case for the play’s own importance.

By the end, though, everything is clicking along again, especially Benton. Eddie has done something peerlessly rotten. Now, he has to stand there and face it down in front of his whole neighborhood, which might not be the whole world but certainly feels like it. Paisley stages the climactic violence with a bravura power, and even a final speech from that risible old lawyer can’t stop the momentum going into the curtain call. Benton has done something peerlessly fine. In front of wild applause, he stands there and takes it, unfussy, unmannered and unforgettable, likability be damned.