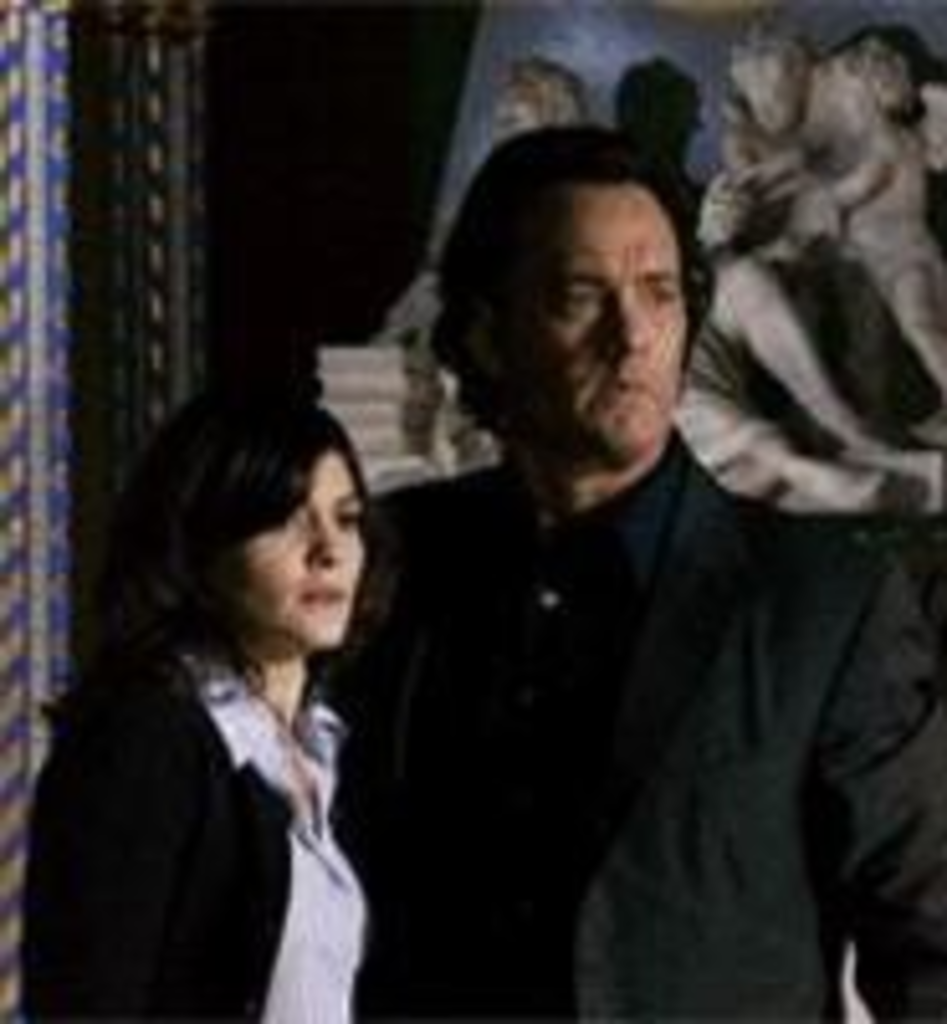 You know it’s hard out here for a screenwriter. You’ve got a surefire hit on your hands – an adaptation of the runaway best-seller The Da Vinci Code – and yet it’s all about talking and solving cryptic riddles, which isn’t exactly suited to a visual medium. It’s also a book that depends on revelation and mystery, but because seemingly everybody in the developed world has read the thing, how are you going to surprise them in theaters?

If you’re screenwriter Akiva Goldsman, it doesn’t really matter. People keep giving him big paychecks even after Lost in Space, so he’s clearly immune to failure. Minor details of the book have been changed, but there aren’t any surprises in director Ron Howard’s film, though Sony has done its damnedest to pretend otherwise by being all secretive. As for the challenge of making puzzle-solving more visual, Goldsman has simply reached back to A Beautiful Mind: Like Russell Crowe’s John Nash, Robert Langdon (Tom Hanks) visualizes mental puzzles in glorious 3-D, thanks to special effects.

He is also similarly stalked by the annoying Paul Bettany, who plays Silas the evil monk, a religious fanatic who has taken a vow of austerity yet carries around a cell phone and a gun – arguably the most annoying inventions of the modern world. He binds his leg with a spiky metal chain in order to make it bleed, and he whips himself while saying his prayers. Bettany undeniably looks freaky in albino makeup. But then he opens his mouth, subjecting us to a ridiculous Dracula voice that undermines the scariness. In the book, Silas passes for an American at one point; alas, if you’ve seen Firewall, you know that Bettany is unable to do the same.

Silas isn’t the main villain, though he commits the murder that gets the story going. He’s merely the henchman of a faceless figure known as the Teacher, who seems to have deep connections within the Catholic Church and an animosity toward a secret society based in France called the Priory of Sion. As the story begins, all four leaders of the Priory have been killed, but the last one – a Louvre curator named Saunière (Jean-Pierre Marielle), who took an exceptionally long time to die from a gunshot wound – has managed to leave an elaborate, cryptic clue as to the identity and motive of his killer. Part of it involves secret writing that mentions symbology professor Langdon by name; other relevant factors include managing to pose himself nude like a Leonardo Da Vinci drawing just before expiring.

The dead guy’s granddaughter is Sophie (Audrey Tautou), who also happens to be a cryptologist. Seeing the crime scene, she tries to help Langdon. Unfortunately for them, the chief police inspector (Jean Reno) is a hard-headed Catholic fundamentalist determined to pin the crime on Langdon. Chasing ensues, along with the emergence of other interested parties, among them creepy bank manager Vernet (Jurgen Prochnow) and boring Cardinal Aringarosa (Alfred Molina). Most important is Sir Leigh Teabing (Ian McKellen), an expert on the legends and history of the Holy Grail, which the Priory of Sion is believed to have guarded.

And here, for those who haven’t been paying attention, is where the religious controversy begins. Part of the “history” revealed by Teabing includes the theory that Jesus and Mary Magdalene were married and had a child. However, given that the book obviously errs in minor claims such as the word Yahweh being based on Jehovah (in fact, it’s the other way around), it’s clear that Brown didn’t necessarily check the veracity of his sources. In a movie, it’s less troubling – does anyone, for instance, believe that Indiana Jones really found the Ark of the Covenant?

The faithful may be assuaged to learn that heresy has been played down. Langdon here is more of an advocate for faith, dismissing much of Teabing’s scholarship as mere theory. This newfound faith also ties into the character’s claustrophobia, which never really paid off in the book. (Such phobia can apparently be cured by having Audrey Tautou caress your face. Who’d have guessed?)

No, the biggest problem here is too much talk, despite worthy attempts to liven things up with full-on, big-budget historical re-creations of Isaac Newton’s England, biblical times, the Crusades, and Constantine’s Rome. Once the Teacher is finally revealed and defeated, the movie keeps going, mostly with theological babble that should have been covered earlier. The final scene is nice, but the endless Rosslyn Chapel bit is interminable.

All in all, a respectable and predictable adaptation.