COVID-19 hit unequally in a city that divides two states 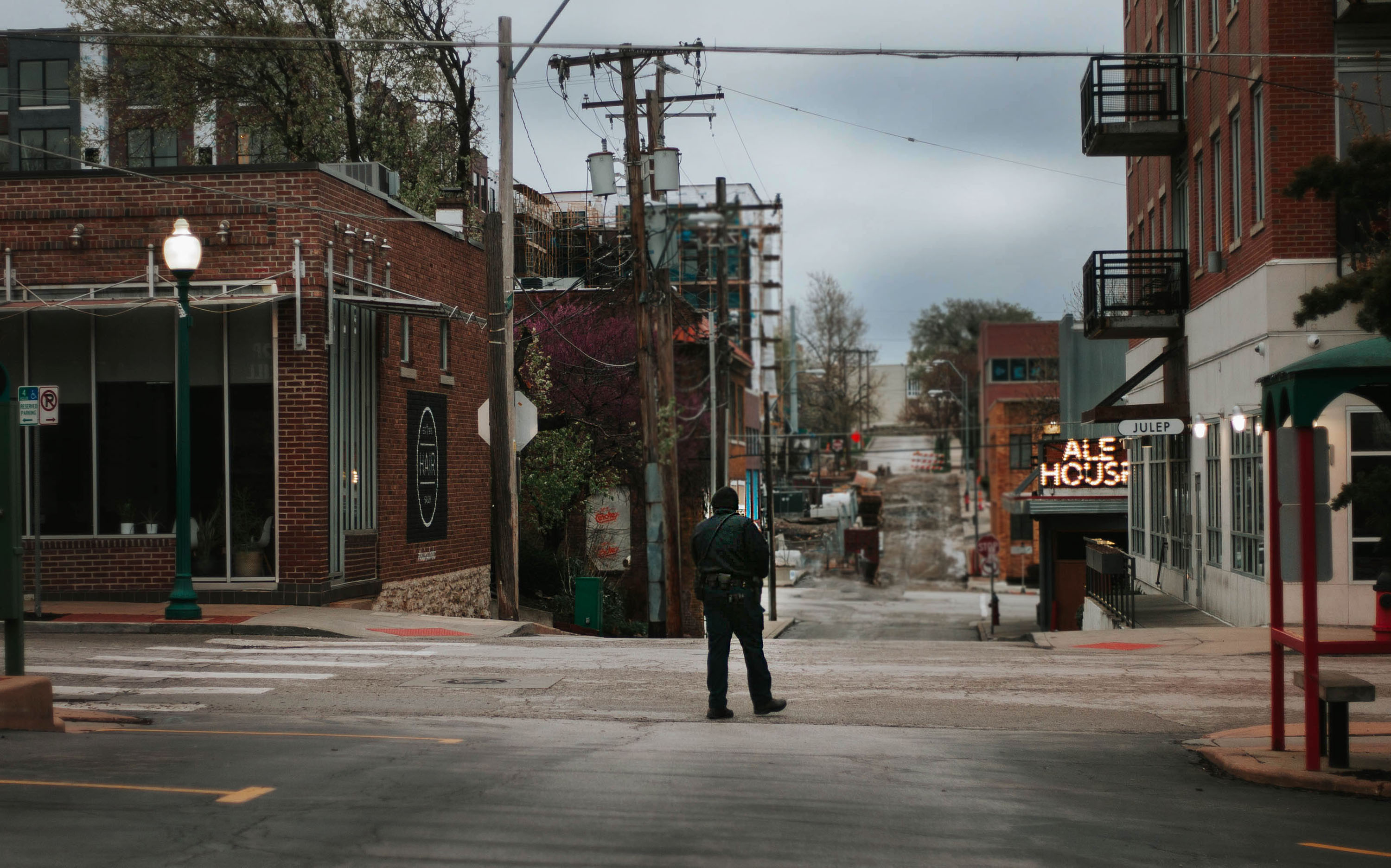 This article was written in early April for publication in our May issue. Up-to-date details are not reflected. As of May 4th, there are 8,754 cases in Missouri with 358 total deaths. Kansas has 5,245 cases and 136 confirmed deaths. From the same date, a study cites Missouri as having the 4th loosest opening restrictions in the country, with Kansas coming in 13th place.

Politics is thick in the COVID-19 pandemic. It’s staring you in the face. (And maybe coughing a little.)

Politics decides how much protective gear our front line health care workers receive. It defines our level of exposure to other people (and their viruses). It defines whether our workplaces will create safety protections. Each of these decisions, when added up, determine our collective survival.

Health crises like COVID-19 are so critical, they’re the root of modern government. In the 1400’s, as the black plague ravaged Europe, Italian leaders began quarantines (the word “quarantine” comes from the Italian word quaranta—“forty”). Venetian leaders, in one of history’s first forms of institutionalized public health, ordered all plague-carrying incoming ships to dock at outlying islands for 40 days.

The medieval Venetians’ “stay at ship” orders saved lives. According to Frank M. Snowden in Epidemics and Society: From the Black Death to the Present, the act was so impactful that it helped build the concept of the modern state. As it turns out, people really like leaders who help them avoid a plague.

Like those innovative Venetians, Kansas Governor Laura Kelly, a moderate Democrat, and Missouri Governor Mike Parson, a conservative Republican, are now facing what may be the defining moments of their legacies. Based on Parson’s response to COVID-19, one wonders if far-right Republicans would argue Venice went too far.

Governor Kelly issued a Kansas statewide school closure starting on March 15. Parson did not issue one at all, instead leaving it up to each district to make that challenging decision.

Kelly started limiting large gatherings on March 16th and initiated a stay-at-home order on March 28th. Parson took action weeks later, after nearly every major Missouri health organization publicly pressured him. When Parson released his stay-at-home order on April 6th, he called it a “piece of paper.” It is. Unlike Kansas and most other states, Missouri doesn’t require non-essential businesses to close, nor does it require residents to stay home.

COVID-19 safety measures vary by zip code in the Kansas City metro area, leaving us all at risk of confusion and exposure. Why don’t we all have the same safety measures?

Over the past few decades, an extreme view of extraordinarily limited government has gone from fringe conservative outpost to mainstream Republican ideal. It owes its popularity to the likes of Rush Limbaugh and well-heeled think tanks like the Cato Institute, founded by Kansas’ libertarian billionaire Koch brothers.

These ideas soared into Washington D.C. with the Tea Party wave of 2010. Former Kansas Governor Sam Brownback used the same principles to create “The Great Tax Experiment” in 2012, which ultimately failed, having created what The Atlantic called an “ongoing atmosphere of fiscal crisis.”

These ideals help explain why Donald Trump refuses to order a national response, even though his health advisors urge it. It explains why Parson left school closures up to individual districts. It’s why Kansas Republican lawmaker Susan Wagle and other Republican leaders tried to push churches open for Easter, in direct violation of an executive order.

By late March, the United States had overtaken China to become the world’s epicenter of COVID-19. America’s cities and states are forced to outbid one another for critical medical supplies. Sewing machine brigades are making up for masks that the federal government refused to procure.

A Politico investigation revealed the Trump administration failed to follow its own internal National Security Council playbook after Coronavirus hit Wuhan, delaying America’s response by as much as two months.

Unemployment has surged to more than 10 percent of the workforce, and states led by far-right policies now face disaster.

In Florida, unemployment programs were decimated so badly by the far-right GOP that when COVID-19 hit, Republicans called it a “shit sandwich.” Florida’s unemployment application site appeared to have been rigged to block applicants, and is now under investigation. Florida’s maximum unemployment check is around $275 per week, one of the lowest in the nation.

COVID-19 recast light on the heartbreaking truism “when white America gets a cold, black America gets pneumonia.” Nationwide, nearly half of African Americans report lost jobs, hours, or furlough—more than any other group.

GOP leaders have been cutting public health programs for decades, leaving us dangerously at risk.

Missouri and Kansas Republicans, the vanguard of the far-right, are among the last holdouts to expand to expand Medicaid. Missouri’s GOP-led state legislature gutted women’s reproductive health care so badly that it caused a surge in syphilis. Missouri has the least-funded public health infrastructure in the nation.

The central mission of modern government, if we look to its first roots more than 500 years ago, is to protect us from the abject misery and early death of preventable disease. Public health programs do exactly that.

From unemployment programs to food stamps to health clinics to housing to COVID-19 response, public health isn’t wasteful spending. It’s the foundation of a vibrant society.

Cook Political Report flipped Missouri’s Governor race from “solid Republican” to “lean Republican” on April 3rd, based solely on Parson’s poor handling of COVID-19. It’s an indicator of what may come this November. A campaign platform that says “I took your job and I took your neighbor’s life because I believe government is the problem,” might itself be a problem.

COVID-19 reveals decades of far-right GOP decisions to ignore the deathly ships calling port to our own harbors. That’s not a failure of leadership. It’s a craven choice not to use it at all.

Former President and Missouri home state icon Harry Truman—widely credited for helping establish Medicare and desegregating the armed forces—kept a plaque on his desk that read, “The Buck Stops Here.” In his farewell address, he said “The President—whoever he is—has to decide. He can’t pass the buck to anybody. No one else can do the deciding for him. That’s his job.”

For medieval Venetians, the basic idea of accountable leadership empowered them to save themselves. It’s something Governor Parson and other far-right GOP leaders would be wise to accept. In this extraordinary era we’re stumbling through, one history will define us by, our leaders will have no one to blame but themselves.