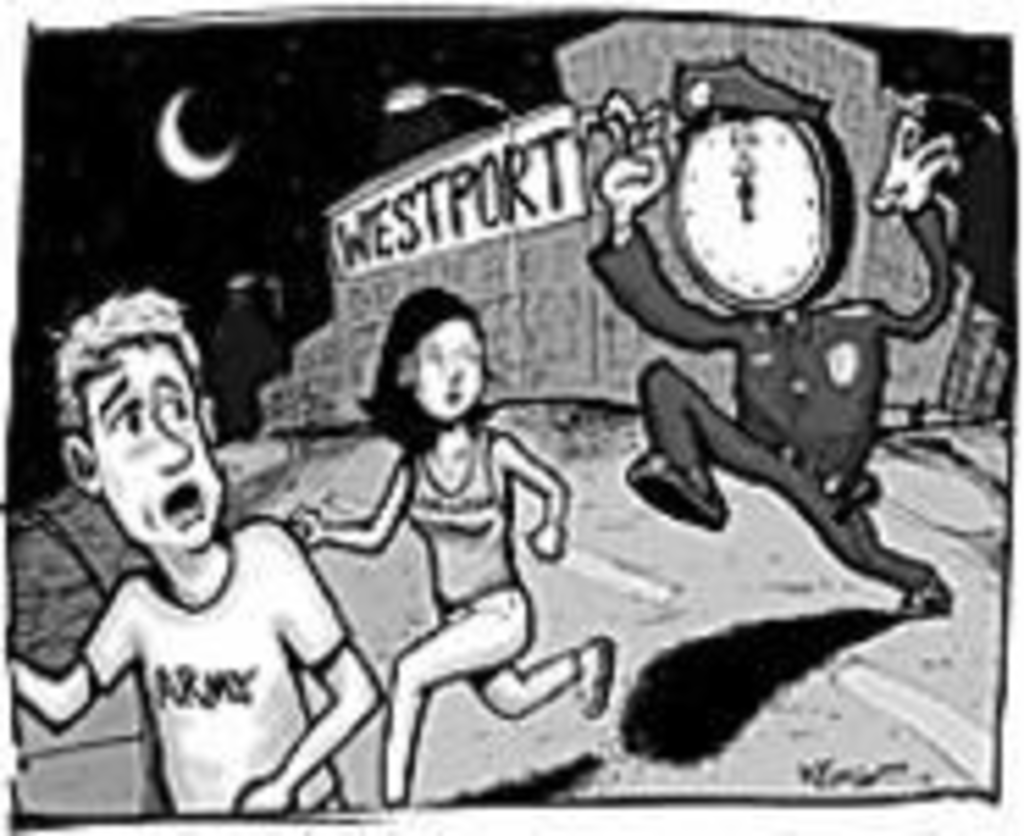 Summer in Westport is almost here, and two city-sponsored committees are contemplating a stricter curfew and weeknight diversions for the thousands of teen-agers who descend upon Westport Friday and Saturday nights.

City and community leaders have been pondering Westport’s inconvenient popularity for years. Yet few workable, detailed remedies appear to be in the offing this year to address the purportedly volatile environment created by young adults, most of whom are black, hanging out in the city’s “entertainment district.”

This year, one committee of community leaders and members of the Westport Merchants Association has met for five or six weeks and is discussing raising Westport’s curfew age from 18 to 21. City attorney Galen Beaufort even drew up a draft of an ordinance raising the curfew age.

Members of the committee seem to know, however, that it’s politically unwise to ask college-age citizens — who can vote, pay taxes and patrol Kabul after midnight — to leave Westport when the clock strikes twelve. “It’s pie in the sky right now,” says Greg Lever, executive director of the Westport Merchants Association.

“Draft ordinances are done on a countless basis,” says Donovan Mouton, the mayor’s neighborhood advocate and organizer of the committees. Mouton says there is no plan to introduce the draft to the city council this summer. “It provides a framework for discussion. It’s nothing nefarious intended.”

Nevertheless, no one sounds interested in even telling the public that raising the curfew is an idea. “If you want to have dialogue with people, and they perceive that we’ve already made up our mind, it’s the last thing we want to happen,” Lever says.

One activist, who asked not to be identified, calls the draft “positively stupid.”

Meanwhile, another committee of city leaders hopes to persuade bar owners throughout the city to reserve one weeknight for young adults to come in and hear some music, grab a bite or have a (soft) drink.

“The suggestion was that we approach club owners about their slow nights, which we surmised were early in the week — Tuesday, Wednesday,” says assistant city manager Anita Maltbia. “They would not be able to sell alcohol, but they could serve nonalcoholic beverages and food.”

The bars would be open for the eighteen-to-twenty set from 7 p.m. to midnight or 1 a.m. It’s “a market-based approach,” Mouton says. Here’s how the market would work: As young adults flock to the soft-drink nights, other bars around town will see there’s money to be made and will want in. Vendors such as Coca-Cola would want to get involved with sponsorship. “If this works, we have to look at advertisers who will pinpoint teen-agers: clothing, food, soft drinks,” says Michael Carter, president of the Carter Broadcasting Group, which owns radio stations KPRS 103.3, KPRT 1590 and KCKN 1340. Carter serves on one of the Westport committees.

Of course, placating kids on Wednesday nights is not likely to magically eliminate weekend crowds, and as of mid-May, no bar owners have signed on to the plan.

Other ideas being discussed — such as a series of evening concerts and a talent show at the Gem Theater modeled after the raucous Showtime at the Apollo — actually sound cool. Less-cool suggestions include evening entertainment at a local bowling alley and activities at boys and girls clubs, which few respectably hip eighteen-year-olds are likely to frequent.