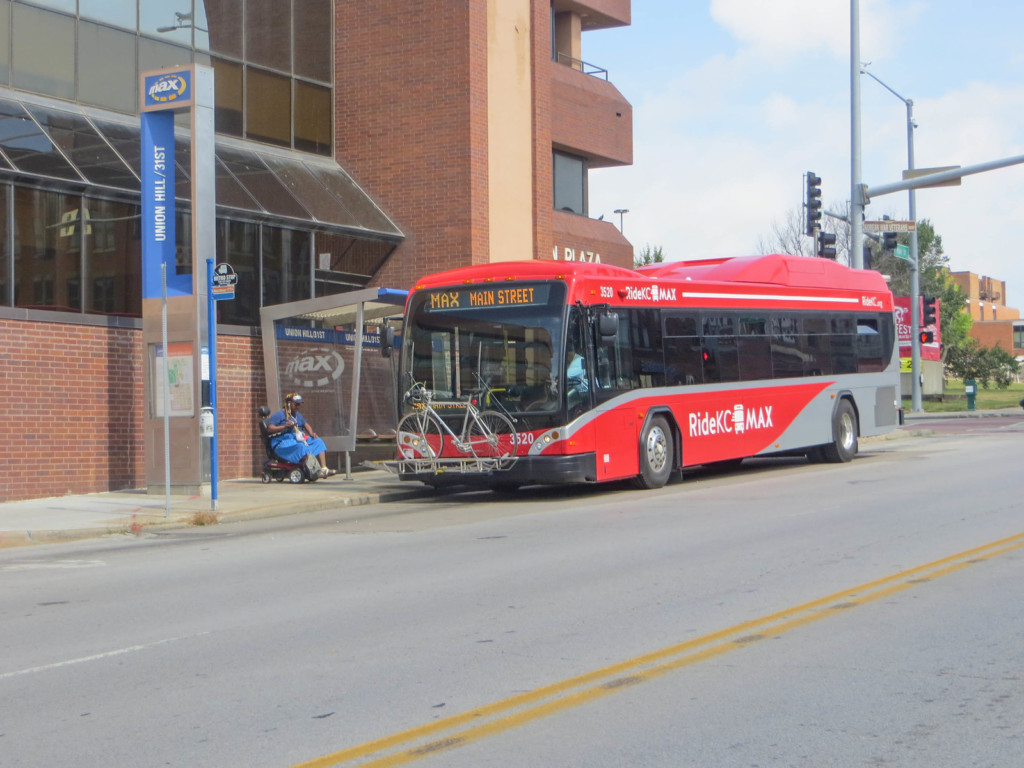 That may not sound like much. But for low-income residents of Kansas City who don’t own a vehicle and struggle to make rent and put food on the table, it’s a significant line item on the budget. Karen Slaughter—president of the Key Coalition Neighborhood Association, an East Side community group—says many of her neighbors, and even members of her own family, take these costs into account when deciding where to apply for jobs.

“If they were to make the buses free,” Slaughter says, “I think that it would be a revolutionary difference.”

It could happen. Since being named CEO of the Kansas City Area Transportation Authority four years ago, Robbie Makinen has been quietly devising ways to eliminate fares. Veterans now ride free, as do many K-12 and college students. He has also forged partnerships with businesses that grant their employees free fares. And recently, the KCATA announced a partnership with local safety-net providers that allows them to distribute free rides to their clients. In all, about 25 percent of KCATA riders don’t pay to ride.

Kansas City’s newly elected Mayor Quinton Lucas is also on board with the idea of zeroing out fares entirely, nodding toward the goal in this month’s inauguration address: “We will still have important work to do … to ensure we’re continuing our steps toward free public bus transit for all in our city,” Lucas said.

Were the KCATA to eliminate fares across the board, that would make Kansas City the first major city in the country—a few small college and resort towns have already done it—with a free transit system.

“Just because nobody else is doing it, that’s not a reason for us not to do it, ” Makinen says. “What’s wrong with trying it? What’s the worst thing that happens? It doesn’t work, and Robbie gets fired.”

There is already, of course, one free mode of transit in Kansas City: the KC Streetcar.

The streetcar’s success is partly a function of the fact that anybody can hop on, at any time.

“I think what we know is, if you remove the fare, you remove a barrier to use, and more people are going to ride the system,” says Tom Gerend, the executive director of the KC Streetcar Authority.

Several years ago, Gerend and the streetcar’s board of directors were faced with many of the considerations the KCATA is examining now. Ultimately, they decided the cost of maintaining a fare collection system—and the estimated 25-30 percent decline in ridership that would result in charging passengers—was more than the revenues they would collect by charging fare on the streetcar (which is funded through a specialized tax district).

Makinen’s thinking regarding free buses runs along those same lines. The challenge is figuring out how KCATA can absorb the loss of revenue that will come from cutting fares.

It’s not actually that much money: $8 million a year out of the KCATA’s $105 million operating budget. The figure seems even smaller when viewed in light of Kansas City’s operating budget of $1.7 billion.

Makinen isn’t yet ready to propose a definitive answer for how to close that $8 million gap. But the transit authority is considering a few options. One is requesting more funding from KCMO, which occupies the largest portion of KCATA’s service boundaries. (KCATA is a bi-state agency with routes that travel into the Missouri counties of Jackson, Cass, Clay, and Platte, and the Kansas counties of Wyandotte, Johnson, and Leavenworth.)

The city of KCMO already collects two sales taxes that benefit transit, though not all of those funds are directed toward KCATA. About $2 million per year goes to the streetcar, and somewhere between $3–4 million goes to the city’s public works department. Redirecting that $5–6 million toward free fares could go a long way.

“I’m not saying it necessarily has to come out of that bucket,” Makinen says. “I’m just saying, out of $1.7 billion, for something that would make this much of an impact on people—I think we can all figure it out.”

“I think it’s far more important that people be able to get to work, and get to where they need to go, than tourists going up and down Main Street,” Loar says. “We want to sit down with the ATA and the streetcar folks and see where the money’s been divided up and how it’s been divided up.” (Loar also suggests philanthropic partnerships as a possible avenue for additional funding.)

The potential extension of the streetcar line to UMKC and the Country Club Plaza would generate significant new revenues from a much larger designated taxing district. Some of that money could be shifted toward buses, Gerend says. The streetcar expansion would also allow KCATA to cut the Main Street Max Line, which would save $4 million.

“The streetcar’s bringing—with our extension to UMKC—all new money funding for transit operations on Main Street,” Gerend says. “There’s an opportunity to free up some existing resources and redeploy them in other corridors and other parts of the system.”

Councilman Eric Bunch (4th District), the new vice chair of the transportation committee, says he would support using general fund money. He notes that $17 million from the city’s general fund is used to subsidize parking garages.

“Legally, I don’t think we can just divest in those obligations, but it’s just a good example of how this isn’t about money, it’s about prioritization,” Bunch says. “And if we want to make public transit a priority, the money is there.”

The KCATA is seeking funding through state and federal levels as well. Makinen says he’s reached out to the Federal Transportation Authority, pitching the idea of KC as a case study for federal research into free transit systems.

“Nobody has the magic bullet yet,” Makinen says. “But it’s there. I’m telling you. If we can’t find $8 million, that’s ridiculous.”

There are objections to these plans. One is security. If buses are free, the thinking goes, ill-intentioned people could board the bus as often as they like, where they’d be free to act dangerously and wreak havoc.

But Makinen is skeptical that $1.50 is what “keeps the wolves at the gate.” To the contrary, he argues that eliminating fares will make city buses safer. Most disputes on the bus occur over fares, and buses carrying cash are more likely to draw thieves. KCATA has also been holding discussions with mental health organizations about bringing designated professionals onto the bus who’d have resources to offer and the ability to spot trouble before it starts.

Another concern: If ridership increases after slashing out fares, how will KCATA pay for more buses to support the new ridership?

Makinen’s response: The KCATA is already paying for routes that aren’t being adequately utilized. Even at peak times of the day, buses usually aren’t full, and some are practically empty during non-peak times. “Honestly, we have the capacity now,” Makinen says. “Ridership is not very high. We could absorb a 30 percent increase and still not have to move a thing.”

So what happens now? Mayor Lucas—who mentions increasing KCMO general fund contributions to KCATA and setting up community benefit agreements as part of upcoming economic development projects as potential ways to get to $8 million—says free buses is “something that I actually am optimistic about in the next 100 to 150 days, I guess, coming up with real pathway.” The mayor adds that he has already been having discussions with Makinen, Gerend, and the city’s public works KCATA liaisons on the topic. With a willing council—nearly every single member has publicly expressed support of the general idea—there seems to be few reasons it couldn’t happen.

“This isn’t just some, ‘Let’s turn on a light switch, [and we’ll have free buses],’” Makinen says. “We have been methodically going through this process.

“Everybody is coming to the table,” he continues. “All the council people, the mayor…we are talking with the state of Missouri. Congressional delegations are thinking through this. I’m just excited that everybody’s taking it so seriously, and I truly, truly believe we are going to get this done. I’m confident we’re going to see an answer by the beginning of the year.”