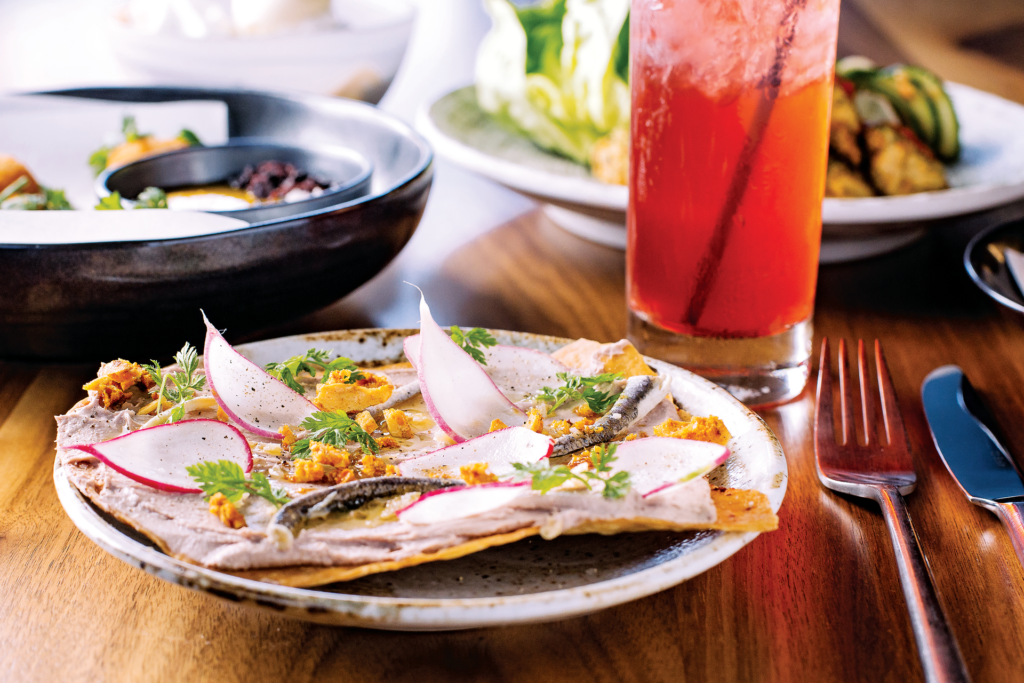 I know: You’re tired of hearing about the Corvino Supper Club and Tasting Room. Since the restaurant’s May opening, foodies and industry insiders have waxed rhapsodic, Yelpers have yelped, and publications (including this one) have genuflected before this latest downtown admixture of fussed-over food and sexy décor.

It’s enough, in fact, to almost disappoint a critic who finds that the devil doesn’t need an advocate here. No, not every dish lives up to the hype. But even if the food wasn’t consistently good — and it is often delightful — the easygoing hospitality alone would make the experience worthwhile.

Michael Corvino, former executive chef at the American, and his wife, Christina Corvino, have set up shop in the recently renovated Corrigan Station building in the Crossroads. Their endeavor — which stretches across an enormous first-floor space (it once housed a post office) — amounts to a Choose Your Own Adventure book in restaurant form. Diners can schmooze over cocktails in the trendy-casual Supper Club, double-fist burgers off a dressed-down late-night menu in the bar, or flex expense accounts in the swank and intimate Tasting Room.

The largest of these options is the Supper Club, a 74-seat dining room with a small stage on the east end. There’s live music every night, but the Corvinos aren’t trying to compete with nearby jazz clubs. The mix is eclectic and unpredictable. A bossa nova ensemble played during my dinner one evening, a solo cellist the next.

Though the menu offers a small selection of large-format entrées, the Supper Club’s signature is small, shareable plates. “Small” and “shareable” may seem oxymoronic, but the dishes are neatly apportioned for group dining. My table of five split 11 plates one evening without coming to blows over the last bites. 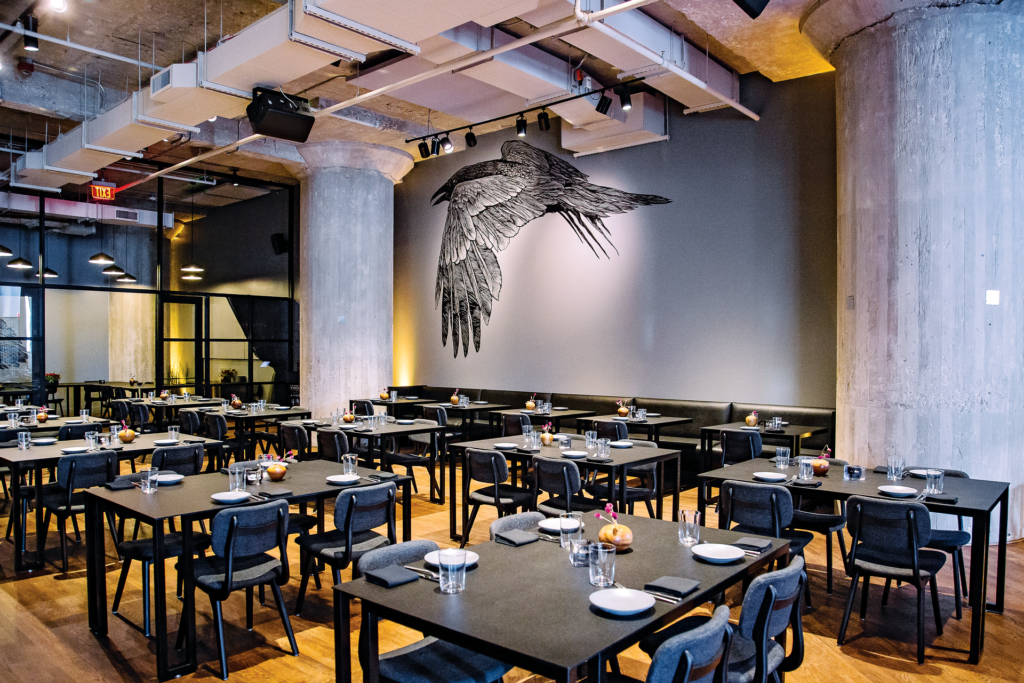 The Supper Club feels modern and a bit masculine. It’s speckled with cool concrete columns that accentuate the 16-foot-high ceilings, the tabletops are matte-black Masonite, and the walls are a subdued gray. The moody palette seems appropriate for the restaurant’s de facto mascot, a raven (in Italian: il corvino). But it also serves as a light-duty sensory-deprivation chamber; just when your eyes are ready to read drabness, the food and the fresh flowers buzz your vision with Wonderland vibrancy.

That buzz doesn’t stop with what you see. Michael Corvino — together with chef de cuisine Dina Butterfield and sous chef Andy McCormick — addresses your other senses with a Supper Club menu of creatively woven textures and flavors, many of which draw influence from French and East Asian cuisines.

The appetizer-leaning options were among the strongest dishes I sampled on my visits. I would have gladly eaten a tray of the oysters, which arrived dressed with a savory dashi mignonette and rings of raw shallot. Ditto a salty, satisfying puck of ruby-red steak tartare with a generous smear of smoked béarnaise and a spindly pumpernickel cracker. For the Supper Club’s take on sablefish brandade — salted black cod whipped into a cottony spread — Corvino forms the fish into rounds and coats them with sourdough crumbs. Think fish tater tots, each golden-brown bite the size of a thimble. The accompanying dipping sauce, a sunny pool of runny egg yolk and tarragon, transforms each fluffy bite into a rib-sticking indulgence. But my table’s unanimous favorite was a creamy mousse of chicken liver slathered over a plate-sized Parmesan cracker and dressed with radish slices, anchovy and sticky shards of “crispy honey.” The honey amplified the liver’s mild, almost caramel-tinged sweetness. 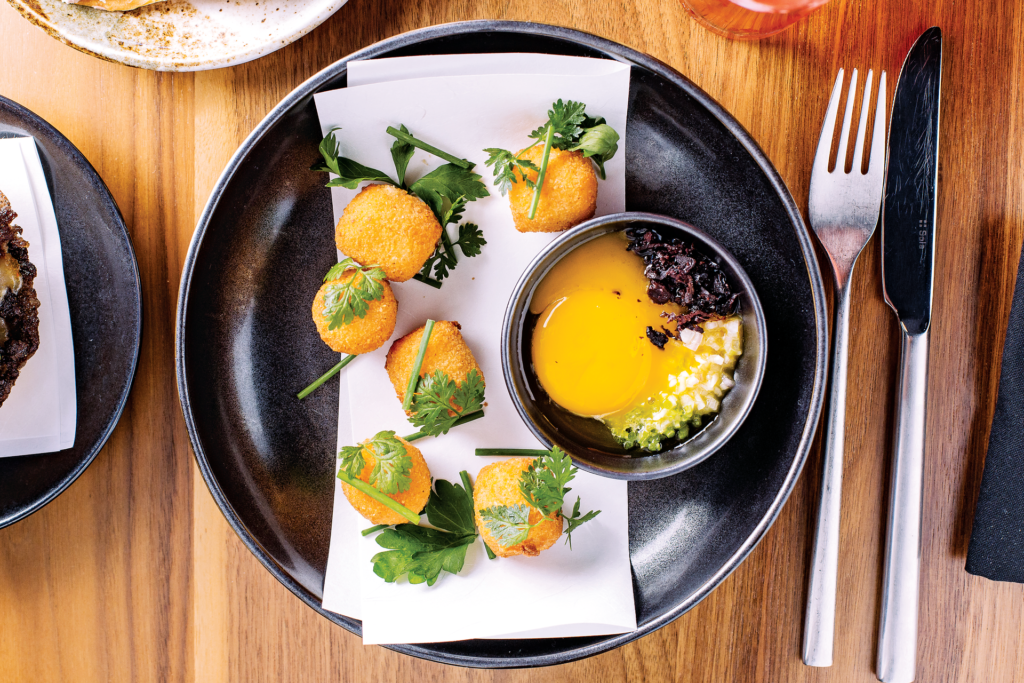 Some of the entrée-leaning plates would benefit from a few tweaks. The crispy pork ribs should have been a home run — fried garlic, fish sauce and a coating of crushed peanuts pummeled the meat with bold flavors. But the ribs themselves were a bit tough, and much of the fat was unrendered. The brisket Bolognese was comforting but not quite worth its $24 price tag. Its buckwheat noodles were firm and flavorful, and the ragù was richly seasoned (if a bit oily), but the inventions promised on the menu — spicy mustard and ginger — were either absent or else so faintly present as to remain undetectable.

I wanted to love the fried chicken ssam (Korean for wrap), boneless purses of breaded chicken served with lettuce for wrapping. The chicken was lager-gold and conspicuously tender — I had to do a double take to make sure it was cooked through — but each nori-dusted piece was too large to be fully enclosed by the wrapper, making the result more lettuce taco than ssam. The lettuce, perhaps intimidated by the hunks of meat, was a limp hindrance. One prefers a more flavorful (and firmer) perilla leaf.

If you’re part of a group, two small plates per person is a good rule of thumb. You can select dishes as you go, or let the server set the pace. We ordered all of our plates up front and asked the server to course them out for us. They arrived in a sensible order — raw meats and mousses first, heartier pastas and hot dishes on their heels — but they piled up quickly, making the meal feel too rushed to savor. (Then again, too much goodness too fast is a nonhardship complaint exclusive to a certain kind of diner.)

Another quibble: The attentive service here can occasionally border on the intrusive. Each time I lifted my water glass, a server apparated from some shadowy crevice to mop up the fresh ring of condensation it had left on the table. This gesture — swabbing invested with the furious, unbroken concentration of an Olympic curler — began to seem adversarial, as though I were insulting Corvino’s fine surfaces. Ahead of my third visit, I considered packing a coaster from home.

Corvino offers complimentary carafes of still or sparkling water (given the millennial memes about mainlining LaCroix, I’m surprised more local restaurants haven’t jumped on the carbonation wagon), but if the liquid you prefer is the cocktail, start with the Gateway Station, a sweet-tart blend of cognac, muscat, fresh berry and bubbles. In the dog days of summer, spring for the Toki Time, a dangerously smooth sip of cool cucumber, Japanese whiskey, ginger and honey.

The Supper Club’s cocktails are $12, which puts them firmly in the “splurge” territory for people like me. Thankfully, smaller appetites (and bank accounts) have a place at the bar, too. The beer markup is low for fine dining, and you can sip on a cold, $3 draft of Hamm’s without judgment. (Craft beer options run $4 or $5.) 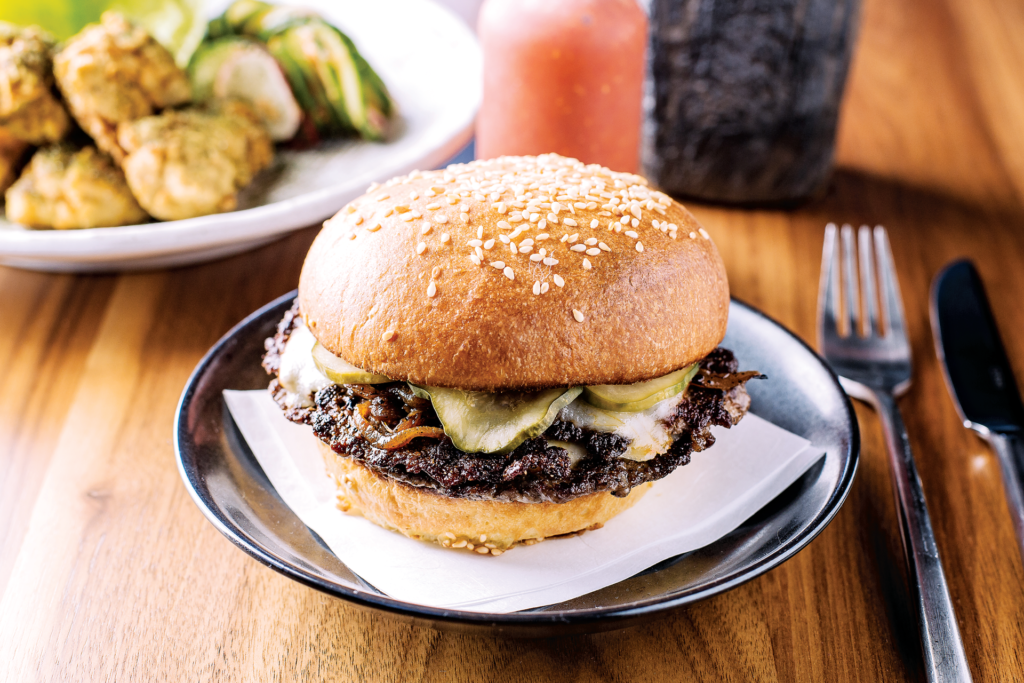 For a more casual experience, aim for the weekend late-night menu and the hamburger, a justifiably celebrated bite that seems mechanically engineered to meet your cravings three beers in. It exceeded mine. I’ll take Corvino’s diner-thin, charred-edge patties over a slab of Thick Pink any day. (Come at me: Medium rare is for steaks, not ground chuck.) At $10, the burger is a bit pricier than your greasy-spoon go-to, but the flawless execution makes it more than fair. The supple, house-made sesame-seed bun is toasted just long enough to stand up to two Muenster-sleazed patties, sour dill slices and a crown of half-charred, half-caramelized onions.

Order the fingerling fries on the side. The spuds occupy that fabled neutral zone between crunchy fry and puffy house-made chip. The fingerlings are sliced thin enough to crisp easily in the fryer, thick enough to leave a few chewy (never mushy) pockets. The bowl makes a generous serving for two, and the fries come with the requisite aioli and a spoonful of deep-brown XO, a Chinese condiment incorporating dried scallops and shrimp.

If you’re looking for a more luxe experience, book a spot in the Tasting Room, an 18-seat, semiprivate space that allows a fine view of both the kitchen and the street. That experience starts at $105 a person, with wine, cocktail or mocktail pairings available for an extra fee. The menu changes nightly, but expect 11 to 12 courses spaced thoughtfully over two and a half hours. Every detail is deliberate, from the room-specific servers (shout out to Jennifer, exceptional and unpretentious) to the course-specific dinnerware (on my visit, I spotted a few handmade ceramics from the Object Enthusiast) to the souvenir menu wrapped in ink-black paper and sealed with silver wax (stamped with a raven seal, of course).

Highlights from my visit included a puffy chive doughnut, a sous vide King salmon trimmed with brunoised celtuce and a bowl of fresh-sliced kampachi fish swimming with paper-thin slices of Serrano chili and bitter nasturtium in a brew of infused coconut milk — Corvino’s spin on leche de tigre.

If you have a party of two, request the chef’s table — the high-top table affords you an intimate view of the kitchen and Corvino’s plating techniques. Bonus: The chef himself will bring over your dishes and talk you through each course and component.

The Corvinos themselves are an integral part of the restaurant’s charm. Michael Corvino’s gentle, aw-shucks presence sets a relaxed tone for the meal, devoid of the pomp and bluster popularly associated with the chef’s coat. On my visit to the Tasting Room, Christina Corvino arrived during the fifth course to share stories and complimentary glasses of the wine the couple served at their wedding (a fruity 2014 Chardonnay from the Abeja winery in Walla Walla, Washington). I suspect it’s a nightly ritual — a bit — but the effect is warm and genuine-seeming regardless.

What I caught myself raving about after the meal was the first dessert course, a delicate balance of sharp flavors that exercised every taste bud. Pastry chef Amanda Schroeder, an alum of the American who studied under Nick Wesemann, married an earthy goat-cheese ice cream, a tart rhubarb curd, a rich smatter of black walnuts and a herbaceous spray of fresh lovage. The dessert bridged from the savory courses to the sweet with uncanny adroitness.

When a $105 dinner isn’t in the cards, you can still sample Schroeder’s creations in the Supper Club. Skip the “lemon bar,” which had a messy, puddinglike texture and a blunt flavor when I ordered it. Satisfy your citrus craving instead with the “pina colada,” a subtle, summery blend of coconut and caramel anchored by a moist cake gorged on fresh lime. The stout-cake sundae is another success, thanks to a stiff whiskey sauce and caramel-sticky fingers of moist, stout-infused cake.

When you can muster the scratch, Corvino’s Tasting Room is can’t-miss Kansas City dining. But there’s nothing second-class about dropping into the Supper Club after 10 p.m. some weekend for a burger and a band. The music is stirring, the atmosphere seductive — and I can guarantee from experience that no one will give you side-eye for ordering a $3 Hamm’s (or leaving a ring under it for a minute).

Best bet: Sip a Toki Time and split the whipped chicken liver and brandade with a friend. Stick around for the late-night menu and indulge in a burger (and a Hamm’s).

Left: the brandade; top: the justifiably celebrated burger; above: the Gateway Station