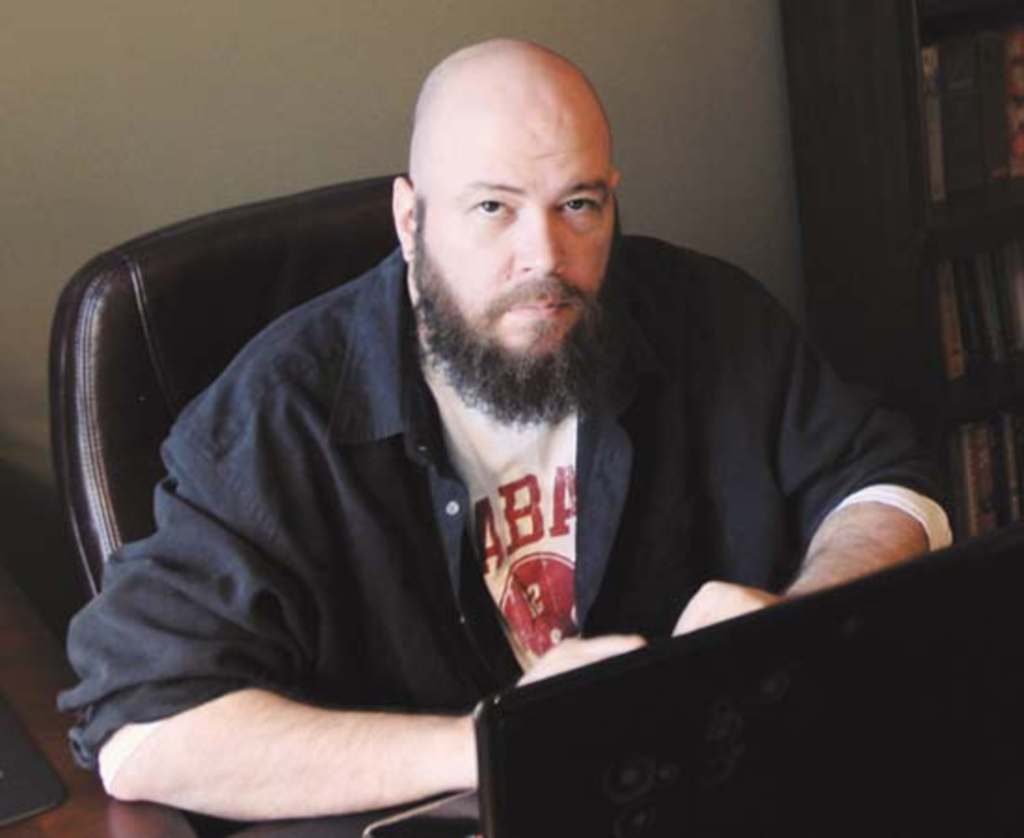 Most kids growing up have a favorite comic-book series. Very few get to write those series once they’re adults. The exception is Jason Aaron.

Aaron grew up with Wolverine posters tacked to his bedroom’s walls in Alabama, and now the 41-year-old Prairie Village resident’s byline graces the books’ covers. His next challenge: a galaxy far, far away.

In January, Marvel releases the first book in the rebooted Star Wars — the original series, which started in 1977, has been retired — and Aaron is penning a new mythology for Luke Skywalker; Princess Leia; Han Solo; Darth Vader; and the remaining rebels, Jedis and Sith lords. Those adventures will take place in the space between Star Wars (Episode IV) and The Empire Strikes Back (Episode V).

“The way Lucasfilm [owned by Disney, which owns Marvel] is doing all their expanded universe now is, they’ve kind of retired all the previous stories that have been done before, so everything else kind of starts over,” Aaron says. “Everything going forward is part of the same canon.”

Aaron has also generated buzz recently with his plans for a new direction for Thor, making the Asgardian God of Thunder into a woman. (The first issue hits stands in October.)

“When I first took over Thor a couple years ago, I knew I was building toward Thor becoming unworthy or not being able to pick up his hammer,” Aaron says. In the Thor canon, the character is able to wield his mighty hammer only as long as he’s worthy. “In the first 25 issues, there’s a theme of it [his worthiness] being questioned. Then the question becomes, when he can’t pick up the hammer, who does?”

Aaron adds that since the series’ 1962 start, women have occasionally picked up Thor’s hammer for a scene or two, but a woman has never lugged it around full time.

“Marvel was down with it from the beginning,” Aaron says. “It’s about saying, ‘I want to tell this story with a character who happens to be female.’ … It’s me wanting to do a story about the female version of Thor. This is a Batman story, not a Robin.”

While the decision earned Aaron serious feminist points, he received a little bit of backlash on social media from fans arguing that changing Thor’s gender altered a fundamental part of the character and Norse mythology.

“There was a lot of reaction — certainly some … knee-jerk online reaction with people who don’t seem to understand what we we’re doing, or thinking we were giving Thor a sex change,” Aaron says. “People saying, ‘Well, you can’t change Norse mythology,’ but they clearly haven’t read Thor because we’ve been changing Norse mythology since 1962.”

For Aaron, Thor isn’t so much about gender or looks (she’ll be hiding under a mask for more than a few issues) but about Thor’s actual character. A shift in gender might change Thor’s worldview a little bit, but Aaron says Thor is still Thor.

“There’s always been that promise inherent in the character, the promise of transformation, that you can pick up the hammer and become something different,” Aaron says.

The move shouldn’t be entirely unexpected for anyone who has read Aaron’s work. He’s known for diving into and developing the characters who inhabit his universes.

“You have to find something you identify with, whether you’re writing a story about regular people or about mutants,” Aaron says. “If you don’t have some sort of identification with it, some sort of emotional stake, the readers aren’t going to have that. You have to buy in yourself if you’re going to expect other readers to do so.”

It’s that ability that has him on the crest of a new wave of comic-book creators, whose superhero-free work is gaining interest from cable-TV networks.

Series such as Scalped represent a shift in comic books, a genre of literature that Aaron refers to as “bastard media.” Hollywood has churned through superhero films for decades, but it took The Walking Dead, Robert Kirkman’s graphic novel about survivors in a zombie apocalypse adapted for AMC, to introduce mainstream audiences to spandex-free characters.

“Over the years, the average person has just associated comic books directly with superheroes,” says the bald and bushy-bearded Aaron, who looks mildly annoyed. “But with the adaptations on TV, it opens up a lot of possibilities to genres other than the superhero stuff. I’m happy to be a part of that, and the more success things like that have — things like The Walking Dead — just go to show that comic books are a lot more than people in spandex.”

Aaron’s break in the world of spandex heroes came in 2001, when his eight-page script for the Adamantium-clawed Wolverine won a Marvel talent-search contest. Then a blind submission to DC imprint Vertigo led to his original series The Other Side, a miniseries about the Vietnam War that was nominated for a 2007 Eisner Award, the industry’s Oscar. Soon after, Marvel commissioned him to work on the Wolverine series and, later, Thor: God of Thunder and The Incredible Hulk.

But The Other Side also paved the way for Scalped, a more PG-13 story than the fantastical universes of Marvel or DC. The 60-issue series ran from 2007 to 2012, set on a modern-day South Dakota Indian reservation, with a plot that included undercover federal agents, casino gambling and murder mysteries.

“Any good long-running series, you’re going to have the characters really well fleshed out,” Aaron says. “With Scalped … it’s why it lasted for 60 issues, because people were vested in those characters.”

Like Scalped, Aaron’s latest original series, the noir-tinged Southern Bastards, is a crime story, but it’s “a little funnier, a little quirkier — a little more Coen brothers-y,” he says, and “there is that touch of magical realism we see in the second issue that will crop up as things go along.”

While he waits for news from WGN’s Chicago headquarters about developments for Scalped, Aaron keeps turning out installments of Southern Bastards. Although the possibility of a TV series excites him, Aaron is happy that he was able to write the story that he wanted to tell. Anything else, he says, is “gravy.”

“It’s been an ongoing process for years,” he says. “There have been lots of people interested in putting something together with Scalped, which is just like anything else in Hollywood — you take a million meetings before one pans out.”

In the meantime, Aaron is busy, rewriting the stories he grew up with for a whole new generation of readers.