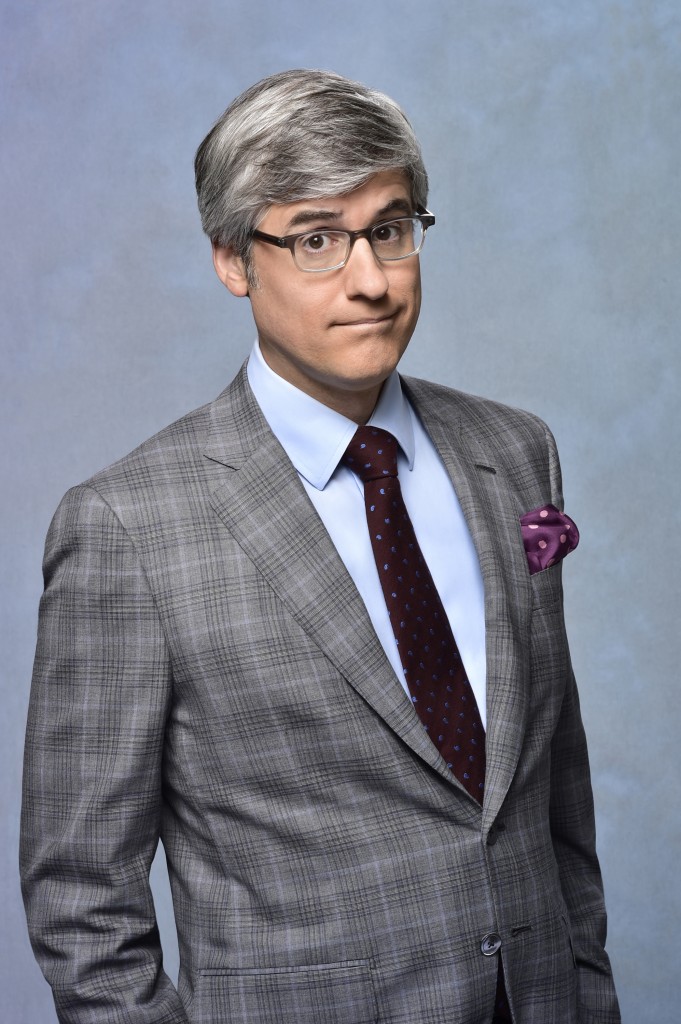 For the last few years, CBS Sunday Morning correspondent Mo Rocca has found a fresh way to look at things that have either died or disappeared from public view.

With his podcast Mobituaries and the new book of the same title looks at both regrettable (Audrey Hepburn) and fortunate losses (who needs McDonald’s drinking glasses with lead paint?). He recounts Lois Weber who was directing movies nearly a century before Kathryn Bigelow finally won an Oscar for helming one of her own and how black legislators served on Capitol Hill in the 19th century as well as the 21st.

Rocca is coming to Unity Temple this Thursday at 6:00 p.m. to discuss the book and other things he has learned from being literal fake news correspondent on The Daily Show and as a panelist on NPR’s Wait Wait…Don’t Tell Me!. The event is sponsored by the Truman Library Institute, and Rocca will be signing the book.

We still don’t have the technology to autograph podcasts.

Speaking by phone from New York, Rocca explains why his low key humor is complementing the hard-driving reporting Mike Wallace did for 60 Minutes on the same TV network. There’s more than one way to obtain and present vital information.

What brings you to Unity Temple on Thursday at 6:00 p.m.?

I have loved and top of talking about this book anywhere people will have me, and I’m a big presidential history buff. I love my presidential libraries, and I had a wonderful time down at the Carter Center in Atlanta and at the JFK Library, and I believe I think all those the presidential library people are on a party-line together.

I’ve got Harry Truman on my mind because I did a big piece about a project about Herbert Hoover and his rehabilitation after his is internal exile (during the Great Depression) by FDR. It was Harry Truman who brought Hoover back into the light. Hoover was extremely grateful, and [Truman] spoke at the dedication of the Herbert Hoover Library in West Branch, Iowa. It was  the first presidential library administered by the National Archives.

One of the things that I think is really fascinating about your approach to history and news is that even though you take a lighter tone, I’ve noticed you don’t shy away from some of the more unsavory things about the people you cover. For example in both the book and the podcast, you cover how the conjoined twins Chang and Eng Bunker overcame exploitation of their condition by sleazy showmen, but they both owned slaves. You manage to do this without being confrontational like Mike Wallace used to be.

Thank you for recognizing that.  On the first score, I had heard an NPR interview with the author of a book about Chang and Eng, an author that I went to in both the podcast and the book named Yunte Huang. I noticed that the conversations ground to a halt when it came to the twins owning slaves, and I thought that’s unfortunate. That makes the story more important and richer. Obviously, it’s a grim detail but an important one.

I understand that people are on edge about many topics these days, and this is spilled over into the way they view history. I get that, but I’d like to maintain a light touch and a compassionate outlook, but I don’t want to be tip-toey, and I don’t think that audiences want that.

I learned that Reconstruction-era senator Blanche Bruce actually was a local guy because he had gone to school in both Kansas and Missouri.

What a life. I love that story because it works on many levels. One of which is who’d have thunk it? You ask most people, including myself, 10 years ago when the first African-Americans and U. S. Congress served. Most people would think the mid-20th 20th century. I think that’s a fair guess. It’s sort of mind-blowing when you think of these men who a handful of years before had been enslaved, representing constituencies in Congress. About 30 percent of those stories in the book are also in the podcast, and that’s one of them.

Visiting the house that he and his and his socialite wife Josephine lived in Washington DC and walking through that house and knowing that it was a social hub, not only humanizes  Reconstruction, but I think it also underlines what hope there was.

Here you have this African-American senator and his socialite wife hosting Supreme Court justices–obviously white, and white colleagues, that there was this moment, at least in places where people thought it’s time to move on. Of course, it backslid terribly, but history doesn’t move in a straight line.

Another story from the podcast, the Orphan Train had a recollection from Concordia, Kan.

Even with the stories you cover that have been documented, viewers might have seen the stomach-churning scenes in The Birth of a Nation that feature uppity white men in blackface portraying black legislators in a way that’s both dishonest and degrading. We have an eight-letter word for that in Kansas City.

Oh, cow patties, ah got it. There is this idea that Hollywood is always very progressive and is very left, but the Lost Cause narrative about the Civil War, which is, of course, very pro-Confederacy.

One thing we weren’t quite able to get into the podcast, Eric Foner, who quite literally wrote the book on Reconstruction, pointed out that a lot of that came from northern academics, strangely enough. A lot of that filtered down.

You would think that it was being concocted in the laboratory in the South, but it was academics at Columbia University. One of the leading ones was there. Eric Foner was reluctant to sort of brand him a racist. You want to be a little bit careful about making judgment calls about people from 100 years before.

But in this case, it’s pretty egregious that it came down from the ivory tower, and it filtered down to Hollywood. Obviously (President) Woodrow Wilson, himself a southerner was a big believer in. The Birth of a Nation is always called a masterpiece. Yes, it was innovative in many ways, but I think it helped cement the Lost Cause narrative with a lot of Americans.

It was fun to hear you restore Thomas Paine (the author of the Revolutionary War pamphlet Common Sense) by having Lewis Black roast him and featuring a Broadway song written in his honor .

I’m looking out my window here in New York, and I live a stone’s throw from that bar (Marie’s Crisis) which is a real cult gathering place, a pretty amazing piano bar. I just love that outside that bar, I began noticing that there is a plaque saying this is where he died. No one thinks about it, and then I realized I’d learned that Marie’s Crisis, the name of the bar, is actually an homage to him.

Thomas Paine is not easy to love. I’m sometimes drawn to characters that aren’t lovable and sort of want to dig in on why. Obviously, the fact that only six people showed up at his funeral is an easy way into the story.

We enjoyed your CBS This Morning piece before the Super Bowl. Unlike Trump, you and Michelle Martin know the difference between KCMO and KCK.

I’m glad that our producer Joe Long decided to add that twist to the piece, that it wasn’t just Michelle in San Francisco and me in Kansas City. We brought her in for a little plot twist there. Kansas City it’s a great city, great architecture, and great food. The visit was all too short, so I’m glad I’m coming back.

My favorite recent piece for CBS Sunday Morning was the one you did on civics education were you actually got Supreme Court Justices Neil Gorsuch and Sonia Sotomayor to say why it was so essential but we have this in schools.

I’m glad you like that. Obviously, they are seen as two very different justice, but they are both following in Sandra Day O’Connor’s footsteps. She was an early earlier advocate of civics education. It’s important, more so than ever. I’d love to do a follow up to that.

I had a very fancy education. I’m very fortunate, but I’m embarrassed about what I still don’t know. I love pieces where I end up learning. I wanted to do a piece, and we did one on Sunday Morning about gerrymandering because I wanted to learn about it.

It’s really important and, boy, it’s a tough one to explain to people and they gave us 11 minutes. It’s still tough, and that’s a lot of TV time.

One of the most poignant segments was the Mobituary for homosexuality as a disorder because you know we now know from looking at more data that there really isn’t anything pathological about it. You think of all the people who suffered because this was treated like a disease.

That is the heartbreaking part of this. Anytime I see that footage from the Kennedy administration of picketers outside the White House and also around that same time outside at Independence Hall in Philadelphia.

It’s not that long ago, and yet the rest of the world viewed them as space aliens but like evil space aliens, the unbelievable courage that those people had and that sense of self. How difficult was it if you were gay at that time to not believe what society was telling you? This is not a story with villains, really, at least the way that I’ve told it in the book because a lot of those doctors the American Psychiatric Association meant well. I think most of them probably meant well. There just wasn’t a lot of understanding.

There were a lot of psychiatrists well before the removal of homosexuality as a mental illness who wanted it removed. Obviously, it was not most, not enough, until a very brave gay psychiatrist testified and said, “Listen, I’m one of you and one of them, and I can tell you this is not a mental illness.” So yeah it’s a poignant story. Diagnoses are meant to help people, but in some cases they’ve hurt people this.

Kansas City has only recently banned conversion therapy for kids. It’s like trying to cure me of being German-Scottish.

It is. It is, and you know that conversion therapy is mental torture.

What do you think educators could learn from what you’ve done in print and on TV?

I’m still figuring out what it is I do. In the case of a black congressman of Reconstruction I think making stories about people helps a lot. The word “Reconstruction” makes a lot of people glaze over. They think it’s all going to be conceptual, or they’re just going to be hearing about a period rather than about people. So I think that’s one thing. I’d like to find a way to talk about ideas and epochs and you know by making it really that people

That’s something that Don Hewitt, the pioneering creator of 60 Minutes said it was the secret to 60 Minutes’ success, making all the stories that people rather than about ideas. This is not for everyone, but in talking about the past I trying not to make judgment calls. I know that sounds a little simplistic obviously, but slavery: bad. That’s a judgment call, but I tried to cut individuals slack and not judge them on the values of the year 2020. I don’t think it’s helpful. I think it creates it pushes history into cable news territory, where you have to line up on one side or another and I don’t think that’s a good idea.

I think people appreciate that. They want to understand the people from the past. history doesn’t move in a straight line the past is not equal backward.

Tonight’s event has just been cancelled due to CBS News and coronavirus concerns.