The cozy holiday rom-com gets the LGBTQ treatment. 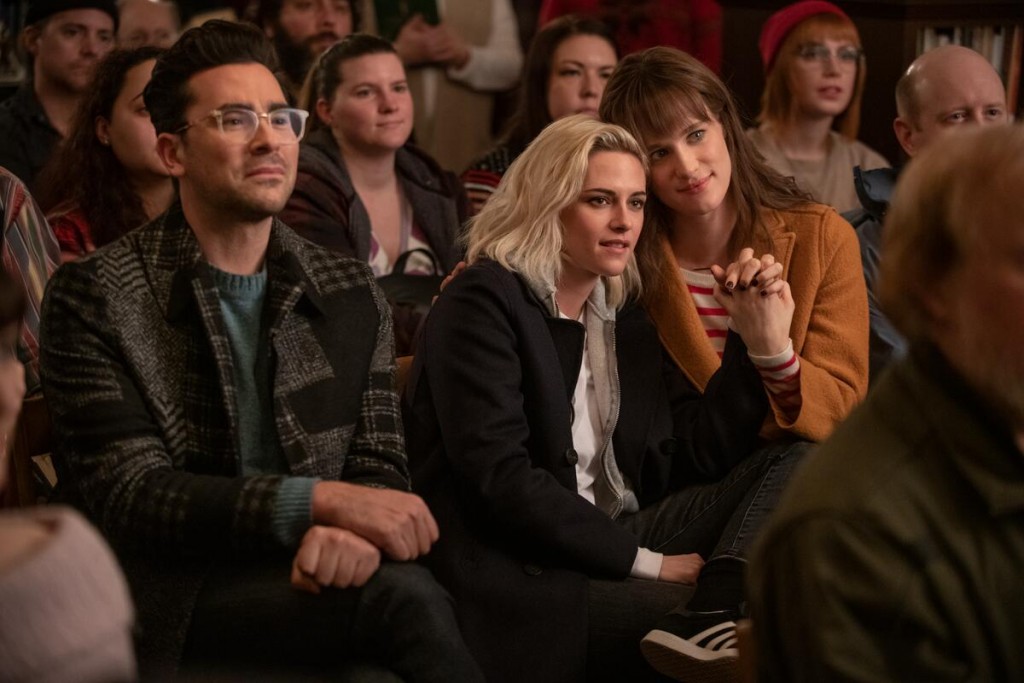 Going home for the holidays can be tough. Whether you spend the season with your family or accompany your partner to see theirs, dealing with relatives’ judgments and different worldviews can make it decidedly not the most wonderful time of the year. It may suck for you, but hey, at least all that familial strife has inspired some memorable Christmas comedies over the years, from The Family Stone to Love Actually.

Clea DuVall’s new holiday rom-com Happiest Season has all of the chaos, cozy romance, and seasonal cheer that viewers have come to expect from the genre year after year, with one major distinction: it’s very, very gay. Before shifting over to Hulu due to the pandemic, the film was set to be the first queer holiday romantic comedy from a major studio to have a theatrical release. Factor in that DuVall, the writer and director, is openly lesbian, and that Happiest Season features four openly queer actors (Kristen Stewart, Victor Garber, Dan Levy, and Aubrey Plaza), and it becomes a pretty big deal by design.

That’s a lot of pressure to put on a Christmas rom-com, a genre known for its cookie-cutter heteronormativity. Not to mention that after decades of major LGBT films often being relegated to period pieces and tragedy, any kind of new mainstream movie is often understandably saddled with a lot of expectations from queer audiences. Thank God Happiest Season works, owing largely to a refreshingly sharp script and fully game actors. It also manages to make some genuinely moving observations about the weight of familial expectations (with a queer specificity drawn from DuVall’s own life), while remaining light enough to warrant repeat viewing.

Stewart and Mackenzie Davis star as Abby and Harper, a Pittsburgh couple who are blissfully on the cusp of engagement. When the Christmas-loving Harper invites her holiday skeptic girlfriend to her parents’ house for the festivities, Abby sees the trip as the perfect time to pop the question. That is until Harper drops a last-minute bombshell: she’s not out to her WASP parents Ted (Garber) and Tipper (Mary Steenburgen, already a regular of December syndication thanks to Elf). Suddenly going back into the closet would typically be a dealbreaker, but Abby’s in love enough to agree to pose as Harper’s straight, orphaned roommate.

Ted and Tipper’s high standards have clearly stuck with the perfectionist Harper, as well as her two older sisters—cutthroat eldest daughter Sloane (Alison Brie), who arrives in town with her picture-perfect family and secrets of her own, and oddball middle child Jane (the film’s co-writer, Mary Holland), who Ted and Tipper clearly stopped pinning their hopes on years ago. Still, there are no real villains in “Happiest Season,” which is far more interested in the challenges of authentically living your life when it doesn’t align with your loved ones’ expectations—something queer people, in particular, know all too well. Coming out isn’t the one-time affair that it’s often made out to be in movies, but a constant process.

DuVall—who made her feature directorial debut with the 2016 dramedy The Intervention—has a strong acting background in comedy and drama that’s evident in her writing. Happiest Season is as genuinely funny as you hope a romantic comedy will be, but it never sacrifices its emotional depth.

The film’s rhythms of humor and poignancy are also indebted to its ensemble cast. Since her Twilight days, Stewart has made a name for herself in the world of arthouse, but her turn as the effortlessly cool Abby allows her to flex her comedic chops in a way she never has. Davis, who’s already beloved in the LGBT community after starring in the Black Mirror episode “San Junipero,” brings a vulnerable sweetness to Harper that grounds the film’s climax. Holland, Levy as Abby’s wry, gay best friend John, and Plaza as Harper’s high school ex Riley are all solid scene-stealers.

Happiest Season has been billed as a “coming out” story, a film archetype historically riddled with clichés of parental rejection, torment, and even death. But since this is a Christmas movie, the potential tragedy that hangs over so many queer movies is never a serious threat to Abby and Harper’s story. Sure, their relationship faces a backslide in the midst of some narratively convenient miscommunication, just like any rom-com couple. But thanks to the genre’s requisite happy ending, viewers can take comfort in the knowledge that everything will ultimately be okay.

“Everyone’s story is different,” John tells Abby after she takes Harper’s hesitancy to come out to her family as a sign that her partner doesn’t love her as much as she thought. “There’s your version, and my version, and everything in between.”

LGBT stories have only really broken into mainstream film in the past few decades, and there are a million less white, less cis, less coming out-centric narratives that deserve the same long-overdue attention that “Happiest Season” is finally getting. Still, there’s something thrilling about watching the cozy, familiar threads of a fully realized Christmas movie made for queer people, by a lesbian filmmaker. It’s about time.