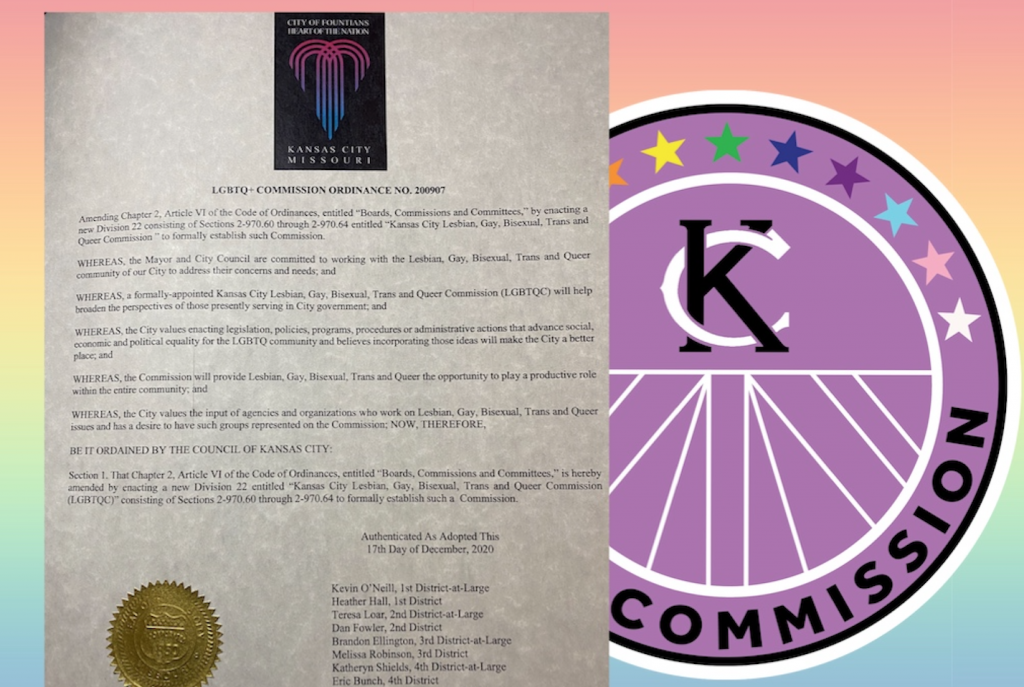 Kansas City is now the first city in Missouri to have an official LGBTQ Commission, for the purpose of advising on policies in the metro and their effect upon issues of diversity and representation.

Ordinance 200907 passed out of Legislative Session Thursday, December 17th during the City Council’s last meeting of 2020. Co-Sponsored by Councilman Eric Bunch and Councilwoman Andrea Bough, this LGBTQ+ Commission was created in collaboration with over 60 local LGBTQ organizations who provided feedback and insight to policy authors and advocates Justice Horn and Crissy Dastrup. These organizations are already playing an integral role, providing recommendations for Commission leadership focused on diversity and representation within the LGBTQIA Community.

This Commission is the first of its kind in the state of Missouri and will further empower the LGBTQIA community with a focused seat at the table in local government.

Next, Mayor Quinton Lucas will appoint seven members who specialize in policies such as housing, public safety, health care and education, as well as six members from each district to provide a geographically diverse voice for the LGBTQ+ community in legislative actions from City Hall.

The authors of this ordinance looked to the ‘LGBTQ Capital of the South’, Atlanta, Georgia, for a working model to glean from. Atlanta Mayor Keisha Lance Bottoms constituted their LGBTQ Commission in 2018.

We congratulate the community on this overdue step forward, and we look forward to seeing who Lucas appoints to the council. This story will be updated as announcements are revealed.