Can City Barrel distinguish itself in a Crossroads runneth over with breweries? 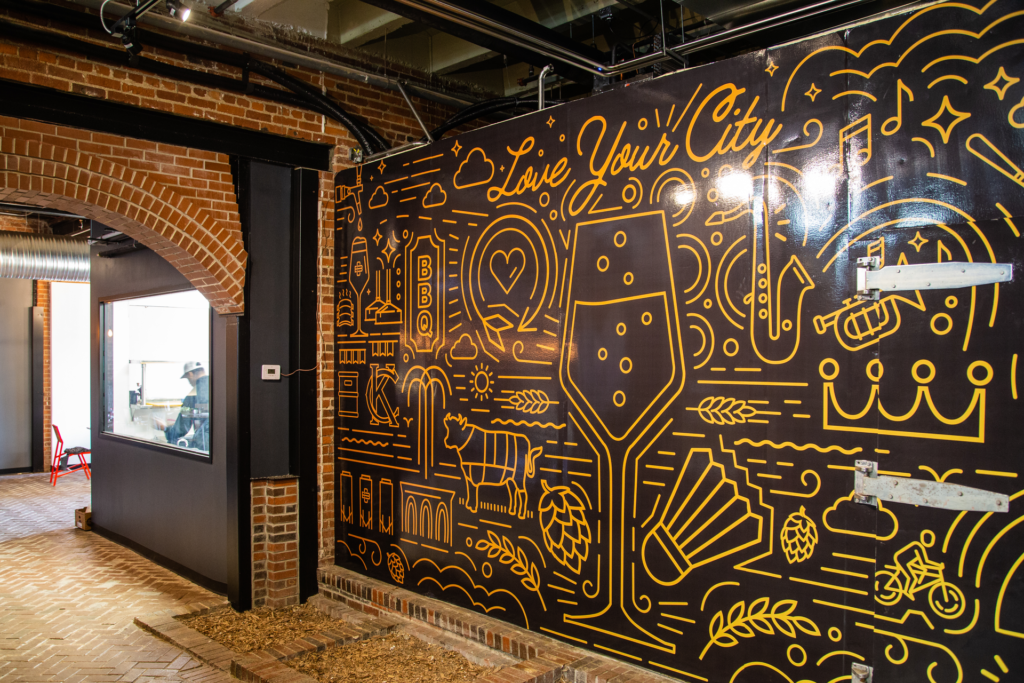 City Barrel Brewing has something to say to anyone who thinks the Crossroads has reached Peak Beer.  In late February, the 15-barrel brewery and restaurant opened on 1740 Holmes, just a stone’s throw from five other microbreweries — Torn Label, Border, Brewery Emperial, Double Shift, and Casual Animal. But co-founder James Stutsman doesn’t see them as competition.

City Barrel has already distinguished itself from the neighbors in a few ways. For starters, it’s enormous: the 7,700 square foot brewery can seat 125 on its first floor and an additional 25 on its second-floor “barrel deck” — a round, wood-faced patio that looks exactly like a beer barrel from the street.

The beers are a little different, too. Stutsman and his co-founders, Grant Waner and Joe Giammanco, have fine-tuned a focus on beer styles that seem underrepresented locally given their national popularity — hazy IPAs (often called New England IPAs), wild ales, and sours. 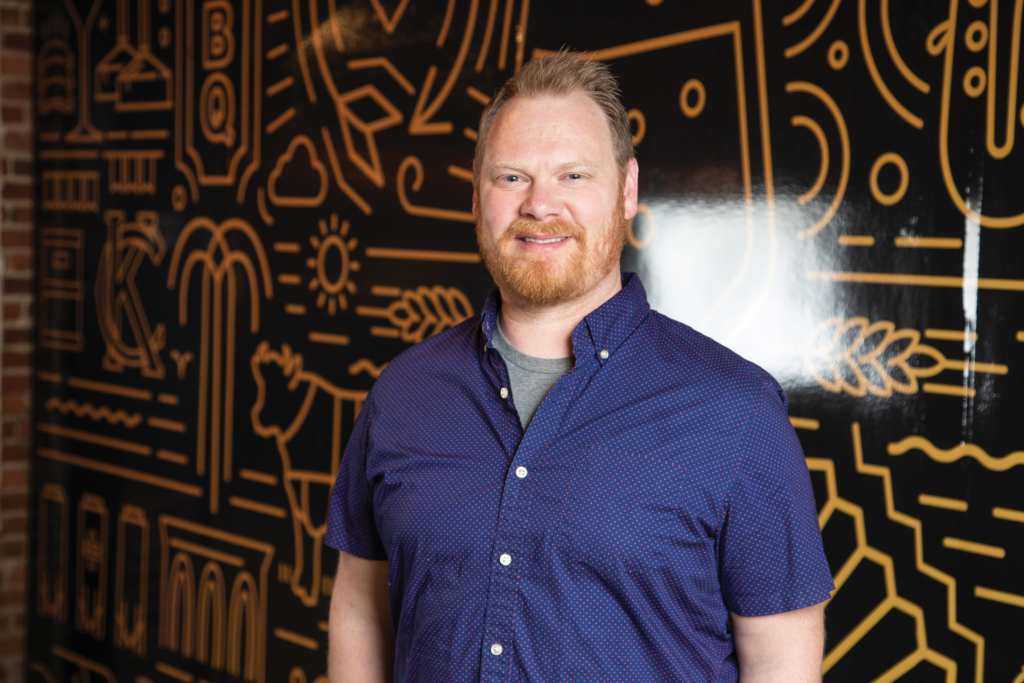 “There’s nobody who’s really owning the IPAs and sours,” Stutsman says. “Lots of people make great ones, but they don’t do it all the time.”

Even sour-beer skeptics will likely find something to tempt them here. City Barrel’s sours run the gamut from tart and earthy (the Crossroads Sour Red) to soft and fruity (Ahoy!). The latter is part of the brewery’s rotating tiki sour series, inspired by the founders’ favorite tropical cocktails. The current iteration is a pink guava lime gose that Stutsman accurately describes as “a crusher.”

City Barrel is a uniquely chill place to sample them. The beer garden and dining room are sheltered in what was once a stone alley between two century-old brick buildings. Turning a covered alleyway into a brewery and restaurant required a little bit of invention — and a lot of infrastructure — but City Barrel has kept as many of the historic features as possible. The stone floors are original, as are the brick walls and archways. Ditto the funky interior windows on either side of the dining room, relics from a time when City Barrel’s neighbors could peer into an open alley (don’t worry; the frosted panes mean no one’s going to be spying on your table and tallying the empties).

The dining room is crammed with white Missouri oak tables and chairs, a nod to the stately oak foeders the brewery uses to age its sour beers. The bar is a live-edge showpiece cut from a 280-year-old tree, and the wood-paneled wall behind it was taken from the Nelson-Atkins Museum after a recent gallery renovation (if you look closely, you can see the nail holes from where paintings were installed). It all adds up to a warm but elegant taproom, the kind of place where you can imagine lingering over a few beers.

“Classy yet comfortable is kind of what we’re trying to do here,” Stutsman says. “We wanted to be a little more upscale than your normal brewery.” 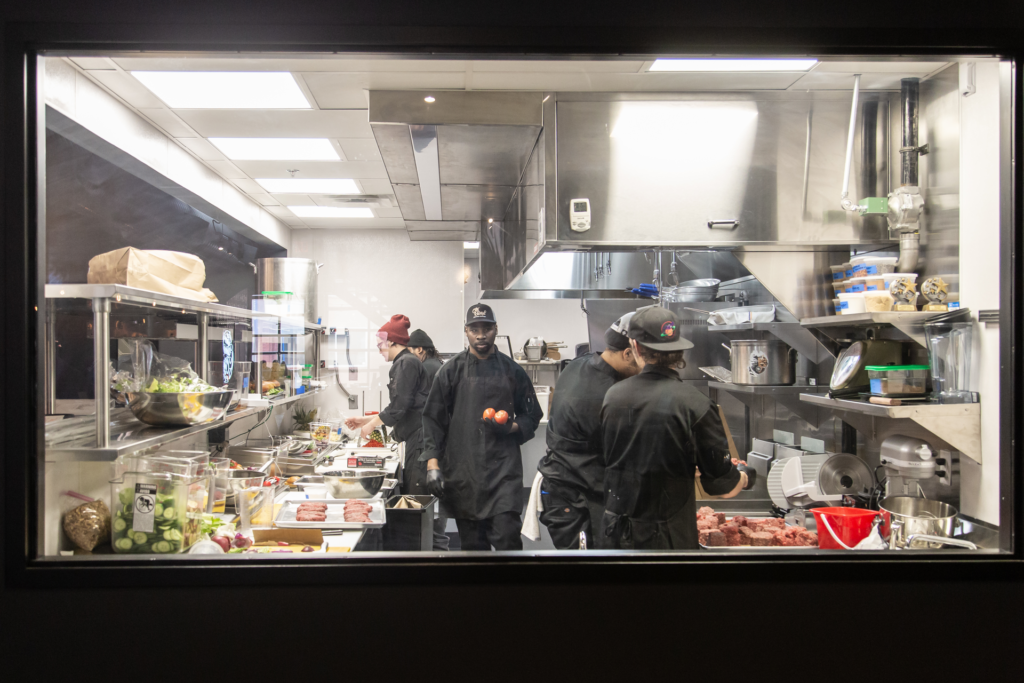 Stutsman and his partners are banking on that cuisine to convince customers to stick around for a few more beers. The menu provides beer pairing suggestions for each dish, and bar manager Michael Hughes has created a creative list of beer-infused signature cocktails for an extra splash of variety (classic cocktails and a handful of wines are available for diners who aren’t into beer). Flights are also available so customers can try out a few “tiny” beers before committing to a full pour. Anticipating which beers will connect with drinkers is always a challenge, but Stutsman hopes two of the current taps will be permanent fixtures — Rad AF, a double dry-hopped hazy with the juiciness and sippability of a beer mimosa, and 816, a soft and approachable blonde ale brewed with many of the same techniques (and dry-hopping rates) as a hazy IPA. 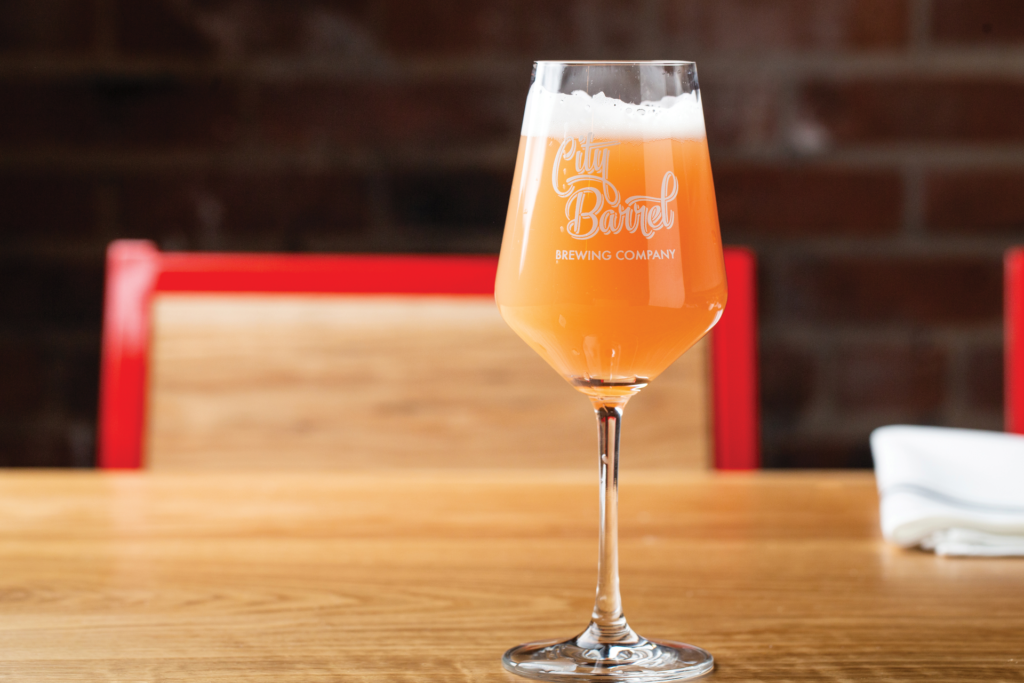 816 will also be the first beer to take a turn on City Barrel’s high-speed canning line, with a can release planned for March 16. But if you want to take a six-pack home, you’ll still have to stop by the brewery. City Barrel has no plans to distribute and will sell all its cans onsite. Also coming soon: spontaneous fermentation. City Barrel invested in a coolship, an old-school, open-top fermentation vessel, and plans to use it to collect wild yeast from different neighborhoods around Kansas City. Look for the coolship to set sail sometime this month, when temperatures are ideal (20 to 40 degrees Fahrenheit is the sweet spot for collecting the right kind and quantity of beer-friendly microbes).

For all the upscale touches and “craft beer meets wine bar” affectations, City Barrel doesn’t feel stuffy. The beer garden at the front of the restaurant has three large TVs for game days, and the brewery plans to add pinball machines and arcade games on its mezzanine level. In perhaps the perfect synthesis of the brewery’s hybrid identity, Stutsman, Waner, and Giammanco have titled one of their forthcoming taps, a Sauvignon Blanc-inspired IPA, “Fancy AF.”

“It’s still beer,” Stutsman says with a laugh. “We can’t take ourselves too seriously.”